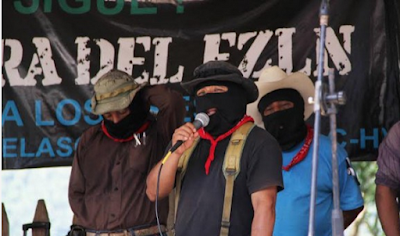 Words of Subcomandante Insurgente Moisés. May 5, 2015

Good afternoon to everyone, compañeras, compañeros, brothers and sisters.
In response to what we have been listening to yesterday, and the day before, we have been commenting in the commission of compañeros and compañeras of the CCRI, that it seems to us that you can see there what it is that we want to do. This is the reason all of us are here, and if we haven’t been dreaming or sleeping, then we are thinking about the things that we have discussed, what the compas and brothers and sisters already brought up and talked about. They have already told us a lot about what this hydra is. So the question is what do we need to do against it?
Organize ourselves. When we give this response, organize ourselves, it means that our brain is already telling us what must be done first, and then second, and third, and fourth, and so on. And so, it’s an idea, when it is in your head it is an idea. Now, when you move your tongue, then it is in your words. What is still missing is action, that is, to organize. Now when you are organizing yourselves, watch out, because it isn’t going to come out like you thought in the idea, or like you said in the word. You are going to begin to encounter a lot of barriers, a lot of challenges.
Because if we don’t organize ourselves, we’re going to get to the year 2100, well, that is, those of us who are going to get there, and we’ll still be talking about ideas, words, and thoughts while capitalism has kept on, where were those of us who criticized capitalism so much? Where will we be if that’s how things are?
Ok, this is what we were reflecting on among the compas of the CCRI, of the Sixth Commission of the EZLN.

UN Denounces the Criminalization of Indigenous Community Radios in Guatemala

Translated from RIDH | Panorama diplomático
Read Cultural Survival's Shadow Report on Guatemala to CERD
By Cultural Survival
Dutch translation by Alice Holemans, NAIS Gazette
On May 15, 2015, the Committee on the Elimination of Racial Discrimination (CERD) denounced the criminalization of Indigenous community radio stations in Guatemala, after submitting its observations on the country, in Geneva, according to the International Convention on the matter.
"The criminalization of community radio, and subsequent detention of Indigenous journalists and closure of radio stations, which are an integral part in the communication of Indigenous peoples, is a new phenomenon" as explained by American citizen, Carlos Manuel Vazquez, one of 18 independent experts appointed by this Committee, who acted as rapporteur for the Guatemalan case, held in late April, and whose recommendations were made public today.