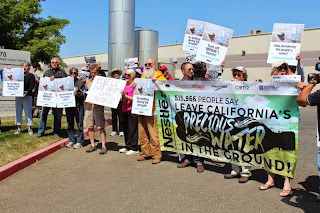 Protesters converge on Nestlé bottling plants in Sacramento and LA

The outrage over the bottling of California water by Nestlé, Walmart and other big corporations during a record drought has become viral on social media and national and international media websites over the past couple of months.

On May 20, people from across the state converged on two Nestlé bottling plants - one in Sacramento and the other in Los Angeles - demanding that the Swiss-based Nestlé corporation halt its bottling operations during the state's record drought.

Wednesday's protest, led by the California-based Courage Campaign, was the third in Sacramento over the past year. The first two protests were "shut downs" this March and last October organized by the Crunch Nestlé Alliance. For my report on the March protest, go to: http://www.truth-out.org/speakout/item/29947-activists-shut-down-nestle-water-bottling-plant-in-sacramento.

For over an hour Wednesday, over 50 protesters held signs and marched as they chanted, "Hey hey, ho ho, Nestlé Waters has got to go," "Water is a human right! Don't let Nestlé win this fight," and "Keep our water in the ground, Nestle Waters get out of town."

An eight-foot-long banner at the Sacramento protest read: "Nestlé, 515,000 people say leave California's precious water in the ground," referring to the total number of signatures on the petitions.

At the protests, activists delivered the 515,000 signatures from people in California and around the nation who signed onto a series of petitions to Nestlé executives, Governor Brown, the California State Water Resources Control Board and the U.S. Forest Service urging an immediate shutdown of Nestlé's bottling operations across the state.

In Sacramento, local activists and residents joined residents from San Francisco and Oakland who took a bus protest outside Nestlé's bottling plant at 8670 Younger Creek Drive. View photos from the Sacramento protest here:http://www.flickr.com/photos/132616837@N02/sets/72157653159511042bottling in California.

Jessica Lopez, the Chair of the Concow Maidu Tribe, participated in the protest with her daughter, Salvina Adeline Santos Jesus Lopez.

"I stand here in solidarity with everybody here demanding the protection of our water rights," said Lopez. "Nestle needs to stop bottling water during this drought. Why have they obtained their current permits to pump city water?"

Tim Molina, Strategic Campaign Organizer for the California-based Courage Campaign, said to the crowd, "Today we are saying enough is enough. With people across California doing their part to conserve water -- it's time that Nestlé did the right thing and put people over profits - by immediately halting their water bottling operations across the State."

"If Nestlé won't do what's right to protect California's precious water supply, it is up to Governor Brown and the California Water Resource Control Boards to step in and stop this blatant misuse of water during our State's epic drought," he said.

"Bottling public water for private profit doesn't make sense for communities and it doesn't make sense for the environment," said Sandra Lupien, Western Region Communications Manager at Food & Water Watch, also at the protest in Sacramento. "During a historic drought crisis, it is utter madness to allow corporations like Nestlé to suck our dwindling groundwater and sell it for thousands of times what it pays. Putting a halt to water bottling in California is a no-brainer and Governor Jerry Brown must stand up to protect Californians' public resource."

After the activists gave the petitions to Nestlé representatives at the Sacramento plant, the Nestlé supervisor presented the organizers with a letter from Tim Brown, President and CEO of Nestlé Waters North America, responding to a letter from the Courage Campaign.

The company said it also would like to engage in "thoughtful dialogue" with the water bottling opponents.

"We appreciate the opportunity to engage in thoughtful dialogue - and in meaningful action - to address California's water challenges. We would welcome the opportunity to speak with you - in person or over the phone - to advance our shared desire for a more sustainable California. We are hopeful that the public discussion we are all engaged in around water use - including your efforts - leads to positive collective action."

In 2014, Nestlé Waters used about 50 million gallons from the Sacramento municipal water supply to produce "Nestlé Pure Life Purified Drinking Water" and for other plant operations, according to a statement from Nestlé Waters. To read the city of Sacramento's responses to my questions about the Nestlé bottling plant's use of city water, go to: http://www.dailykos.com/story/2015/04/10/1376873/-City-of-Sacramento-s-responds-to-my-questions-about-Nest)

Nestlé Waters is not the only corporation bottling Sacramento water during the drought. A report on CBS TV earlier this month revealed that Walmart bottled water also comes from the city of Sacramento's drinking water supply. (http://sacramento.cbslocal.com/2015/05/08/wal-mart-bottled-water-comes-from-sacramento-municipal-supply)

In Los Angeles, local activists and residents were joined by people from Orange County and Long Beach who took buses to protest outside Nestlé's bottling plant at 1560 East 20th Street.

The representatives from consumer, environmental and human rights groups who participated in the protest, like at the protest in Sacramento, blasted the corporation for making millions off bottled water during the drought when urban users are seeing increasing restrictions on their water use.

"As California's water supplies dry up, Nestlé continues to make millions selling bottled water and that's outrageous!" explained Liz McDowell, campaigner for SumOfUs.org. "We've stood up to Nestlé exploiting natural resources for profit in the past everywhere from Pakistan to Canada, and now the global community is speaking out before California runs completely dry."

The Desert Sun recently reported that Nestlé was bottling water in desert and drought-stricken areas of California and selling it for a big profit, even though its permit for water pipelines and wells in the San Bernardino National Forest had expired in 1988. Nestlé currently extracts water from at least a dozen natural springs in California for its Arrowhead and Pure Life brands.(http://www.desertsun.com/story/news/environment/2015/04/11/nestle-bottled-water-california-drought-water/25621915/)

A majority of people in the U.S. believe Nestlé should stop bottling in California, according to a recent poll. However, in spite of the increasing public outcry, Nestlé CEO Tim Brown, when asked about the controversy, said he wished the corporation could bottle more water from California.

When asked in an interview with KPCC radio if he would stop bottling water in the state, Brown replied, "Absolutely not. In fact, if I could increase it, I would."

Zack Malitz, Campaign Manager at CREDO Action, accused Nestlé of "profiteering at the expense of the public interest."

"In the midst of an historic drought with no end in sight, it is wildly irresponsible for Nestlé to extract vast amounts of California's water," said Malitz.

"For decades, Nestlé has demonstrated a blatant disregard for local communities and the environment," said Erin Diaz, the campaign director at Corporate Accountability International's Think Outside the Bottle campaign. "In response to community concerns about its backdoor political dealings and environmental damage, Nestle has poured millions into PR and greenwashing campaigns. But Nestle's money can't wash away its abysmal track record, and Californians are demanding an end to Nestle's abusive practices."

John Tye, Campaign Director, Avaaz, concluded, "Families across the American West are already paying a steep price for mismanagement and scandalous selloffs of public resources. It's time for California, and Governor Brown, to set a strong example for conservation and responsive regulation. Tens of thousands of people across the country are tired of watching companies like Nestlé profit at the expense of the taxpayers."

The protests take place as Governor Jerry Brown continues to push his plan to construct two massive tunnels under the Delta, potentially the most environmentally destructive protect in California history. The twin tunnels would divert massive quantities of water from the Sacramento River to be used by corporate agribusiness interests irrigating drainage impaired land on the west side of the San Joaquin Valley, as well as to Southern California water agencies and oil companies conducting fracking and steam injection operations.

The construction of the tunnels would hasten the extinction of winter-run Chinook salmon, Central Valley steelhead, Delta and longfin smelt, green sturgeon and other imperiled fish species, as well as threaten the salmon and steelhead populations on the Trinity and Klamath rivers.

But the tunnels plan is just one of the many environmentally destructive policies of the Brown administration. Governor Brown has presided over record water exports and fish kills at the Delta pumping facilities; promotes the expansion of fracking in California; pursues water policies that have driven Delta smelt, winter-run Chinook salmon and other fish species closer to extinction; and authorized the completion of questionable "marine protected areas" created under the helm of a big oil lobbyist during the Marine Life Protection Act (MLPA) Initiative. (http://www.truth-out.org/speakout/item/30452-the-extinction-governor-rips-the-green-mask-off-his-tunnels-plan)

The groups are now urging everybody to sign the pledge by Daily Kos, Courage Campaign and Corporate Accountability International: Do not drink bottled water from Nestlé: http://www.dailykos.com/campaigns/1224

This is the text of the pledge to Nestlé Corporation:

For more information, go to: http://www.couragecampaign.org/site/page/photos-major-protests-in-la-and-sacramento-demand-nestle-stop-water-bottlin

Tim Molina of the Courage Campaign speaks at the protest at the Nestlé bottling plant in Sacramento. Photo by Dan Bacher 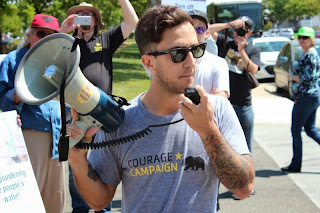 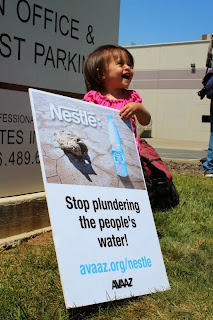 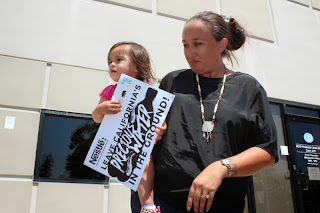 Jessica Lopez, Chair of the Concow Maidu Tribe, with her daughter in front of the Nestlé bottling plant. Photo by Dan Bacher.
§Leave it in the ground! 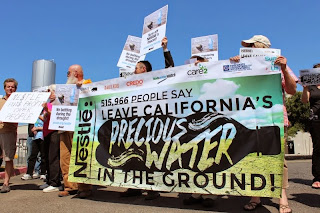 The big banner in front of the plant on May 20. Photo by Dan Bacher.
§Marching at the plant 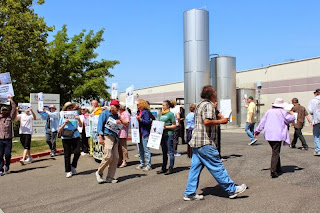 After marching in front of the entrance of the bottling plant, the organizers and activists delivered the petitions to Nestlé management. Photo by Dan Bacher.
§Francisco Dominguez 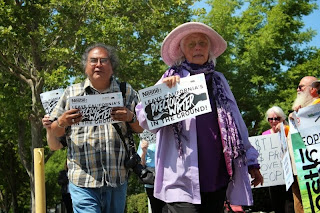 Francisco Dominguez, photojournalist, and another activist march in front of Nestlé. Photo by Dan Bacher.
§Jay 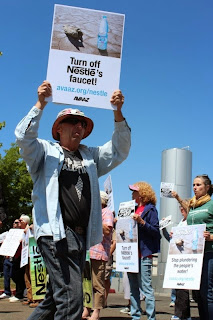 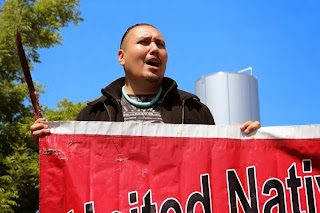 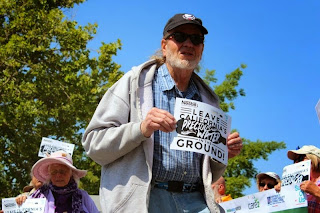 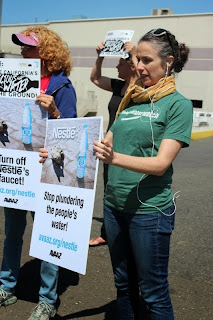 Sandra Lupien (right) of Food and Water Watch holds a sign at the protest. Photo by Dan Bacher.