Zapatistas Comandanta Dalia 'Waking up to the good fight' 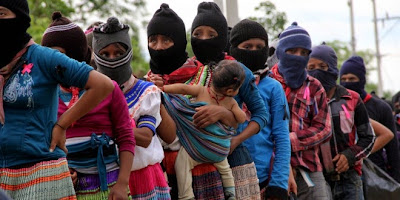 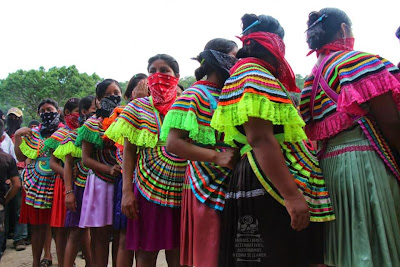 Good evening compañeros and compañeras, brothers and sisters.
What compañera Comandanta Miriam just explained is all true. We were poorly treated, humiliated, and unappreciated because we never knew that yes, we did have the right to organize, to participate, to do all types of work; this is because no one had given us an explanation of how we could organize to get out of this exploitation.
At that time we were all in the dark, we didn’t know anything. But during the time of clandestinity, there came a day when some compañeras were recruited, and they went on to recruit other compañeras village by village.
Then came the time to name a compañera to be the local authority for each community. They named me as a local authority of my community. That is when I started going to meetings in order to bring more information back to the community. Later on we held meetings with the compañeras in the village to explain to them how the collective work could be organized, and to also to explain to them that its necessary to have compañeras who are insurgents andmilicianas.i
If the fathers and mothers understood, they sent their daughters to be milicianas, to be insurgents. And thesecompañeras did the work with incredible gusto because they already understood what exploitation in the bad system was. This is how the compañeras’ participation began.
Of course, this was not easy at all, but little by little we came to understand, and in this way we moved forward until 94 when we came out into the public light, when we couldn’t stand the mistreatment from those capitalist fuckers. There we saw that it was true that we did have courage and strength just like the men, because we could face off with the enemy, without fear of anyone. This is why we are ready for anything the bad capitalist system tries to throw at us.
Later, I went on to be a regional authority. The regional authority is responsible for holding regional meetings with thecompañeras who are local authorities; for taking information to the people, for organizing the compañeras in how to do work in the community. We also went to visit the communities to organize more local authorities, and to help the other compañeras understand that it was necessary for women to participate. This is how we started participating
Little by little we lost our fear and embarrassment, because we now understood that we had the right to participate in all areas of work. We came to understand that making a revolution required both women and men.
That’s all, compañeros, compañeras.

Zapatistas: 'Political Economy from Perspective of Communities I' 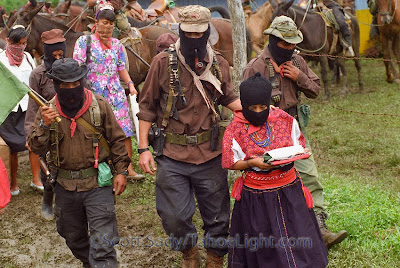 Political Economy from the Perspective of the Communities I. Words of Subcomandante Insurgente Moisés. May 4, 2015

Political Economy from the Perspective of the Communities I.