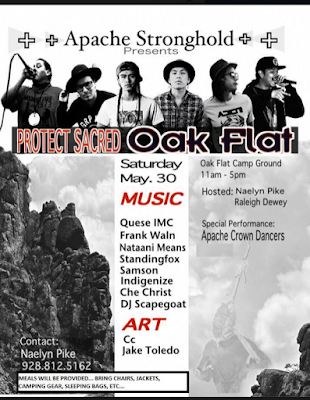 OAK FLAT, Ariz. -- On Saturday May 30, 2015 to Sunday May 31, 2015 The Apache Stronghold will host a two day camp and conference to discuss the future actions and protection of sacred Oak Flat, Arizona entitled “Protect Sacred Oak Flat Conference & Apache Stronghold Spiritual Gathering.” Saturdays Protect Oak Flat events will begin at 11 a.m. with traditional Apache Songs and will then be lead by master of ceremonies Naelyn Pike and Raleigh Dewey who will introduce Wendsler Nosie Sr., San Carlos Apache and Tribal Councilmen from Peridot District, will give an official welcome and kick off a free concert with national leading Native American artist Nataani Means and Frank Waln recently featured in Mtv’s new series Rebel Music. DJ. ScapeGoat, Che Christ, Indigenize, Standing Fox, and Quese IMC are also scheduled to perform. Each Native American artist comes from diverse independent sovereign nations that are also lending their support in the protection of Oak Flat. The evening finally at 5pm will host the Apache Mountain Spirit Dancers and will give blessings for all participants. This free event is open to the public and all faith base organizations.

On Sunday May 31st Protect Sacred Oak Flat Conference & Apache Stronghold Spiritual Gathering will resume with registration from 7am- 8am. At 8am a traditional Apache Holy Ground ceremony will be lead by San Carlos community leaders and spiritual advisors. At 9am the conference will commence and will feature four tracks of education and action in protecting sacred Oak Flat area. An Art Project in the Oak Flat Camp Site will be a focus on artistic talents and provides a positive outlet for youth and those artistically inspired to share their work. An Eco Tour will be given to participants and will focus on the natural environment of sacred Oak Flat and introduce participants to the land being threatened and under attack. There will also be a Spiritual Tour that will focus on the spiritual identity and significance the land of Oak Flat has to the Apache and other Native American cultures. Apache Community meeting in Oak Flat campground with the San Carlos community will discuss future work and present an action plan for protecting Oak Flat. A free camp Dinner will be provided both days for all participants by The Apache Stronghold organizers to protect Oak Flat. 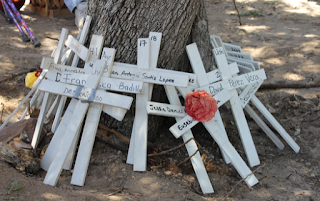 TUCSON, Ariz. --    On Sunday, May 31st, the twelfth annual Migrant Trail, a 75- mile walk from Sásabe, Sonora will arrive in Tucson, Arizona.  The event will culminate in a press conference, followed by a community gathering at Kennedy Park. Approximately 60 participants who have made the seven-day trek have traveled from México, Canada, and more than 13 states throughout the US; they represent diverse international communities that include Colombia, Guatemala, and Palestine.

Since the 1990s, more than 6,000 men, women and children have lost their lives crossing the U.S.-Mexico border. The ongoing human rights crisis of deaths along the border is only one piece of the larger strategy to funnel vulnerable migrants into Arizona's deadly desert. Participants of the Migrant Trail walk not only bear witness to the tragedy of death, but the intentional dehumanization and militarization of border communities.
“I could understand this tragedy in our borderlands if our country were poor. But those who make these policies that lead to so many preventable deaths brag of our strength, our wealth, our moral compass. These policies are immensely costly, both in terms of the billions of dollars spent and in terms of our moral standing in the rest of the world,” says Mohyeddin Abdulaziz, long-time Tucson resident, and member of Southern Arizona BDS, an organization that seeks to link human rights issues from the US-Mexico border to the borders of Palestine.
“This walk does many things,” added Lupe Castillo, Tucson resident and participant in the Migrant Trail from its inception. “One of its successes is that it brings people from all over to recharge our creativity to do the very painful and yet joyful work we do in our communities with migrants and refugees. As a collective, we can continue to walk in the footsteps of those who have built this movement before us.”The Migrant Trail Walk will begin the final 6.7 miles of their journey at 7:15 am at the BLM campsite on Ajo Way and San Joaquin Road.  Participants will be welcomed home at Ramada #3 at Kennedy Park at 11:30am with speakers, music, food, and testimonies from participants and supporters.  This event is free and open to the public. 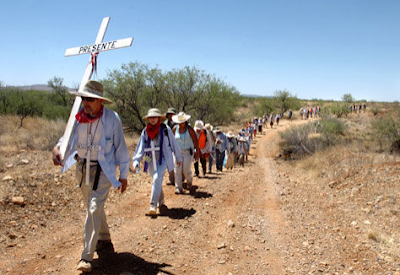 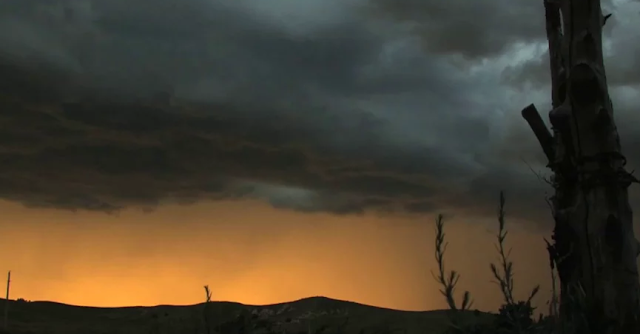 As the faithkeepers says: “Stay peaceful & pray!”
kaia’nere:kowa, is the law of the land of Great Turtle Island, based on the basic thought and knowledge in how a people relate to the universe. The opening thanksgiving outlines an interdependent system of relations of all elements of nature, which are equal; women are powerful in social, political and economic life; and the people form the base of power. The Great Peace is not a religion. It is our system of consensual decision making.

“Soon, Oren, soon!”
The Code People describe Handsome Lake as a religion. It is based on a hierarchical order which goes against the Great Law, which is egalitarian. Their “creator” is a male hierarchical concept based on the Vatican model. Their longhouse where they “pray” is a church without a steeple. It was designed to create division amongst the Rotinoshonni to overtake the law of the land, the kaia’nere:kowa. They prove it by allowing an agent of the CROWN, Aaron Detlor, a bar lawyer, to incorporate them into the Admiralty matrix.
The corporation of Canada developed another way to try to destroy the Great Peace. Canada promotes and provides financing to the Handsome Lake religion in most of the Rotinoshonni communities by subsidizing the building of their longhouses and programs.
Bill C51 was passed to outlaw the radicalization of any religion. Aaron Detlor incorporated the Haudenosaunee Confederacy Council of Chiefs at Six Nations. Canada’s real target is the Great Peace, our legal form of government. It looks to us like they are trying to class anyone following the Great Law as the radicalization of Handsome Lake.
The kaia’ereh:kowa is not affiliated with any building. It is our constitution and it resides in our minds, not in a house. Our source energy is all of creation, the common denominator of the universe. We give thanks to creation, talk to our mother, to our relatives and no one else. No mediator, priest or faithkeeper is needed.

Oh! You follow the Code! You’re welcome in our longhouse, brother.
Any persons who submit to foreign laws are alienated and subject to death. [Wampum #58].
As REM laments: “That’s me in the corner. That’s me in the spotlight losing my religion. Trying to keep up with you. And I don’t know if I can do it.” [Losing my religion].
MNN Mohawk Nation News kahentinetha@mohawknationnews.com more news, books, workshops, to donate and sign up for MNN newsletters, go towww.mohawknationnews.com  More stories at MNN Archives.  Address:  Box 991, Kahnawake [Quebec, Canada] J0Lthahoketoteh@mohawknationnews.com for original Mohawk music visit thahoketoteh.ws
Satanist bar lawyers.
Corn, beans and squash.