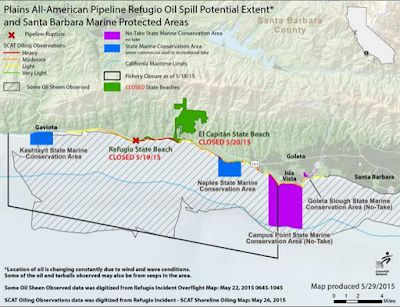 As the Santa Barbara Oil Spill fouls the controversial "marine protected areas" created under the privately-funded Marine Life Protection Act (MLPA) Initiative, Californians Against Fracking announced they will march with local residents at the site of the tragic spill to call on Governor Jerry Brown to stop fracking and "move California off dirty fossil fuels."

Following a disastrous 105,000-gallon oil spill that devastated fish and wildlife populations and closed down beaches, the group "Stand in the Sand" will gather in De La Guerra Plaza in Santa Barbara on Sunday, May 31 at 1 p.m. to show solidarity with local residents and organizations working on the front lines in response to the spill, according to a news release from Californians Against Fracking.

"Members of Californians Against Fracking, including Santa Barbara County Organizer for Food & Water Watch Rebecca Claassen, will be there to call on Gov. Jerry Brown to issue an emergency moratorium on unconventional oil extraction methods including on- and off-shore fracking, and move the state toward 100 percent renewable energy," according to the group. "Carrying a 90-foot long inflatable pipeline, the group will call attention to the governor and state regulators’ failure to protect California communities from the hazards of extreme oil and gas operations."
Read more »
at May 30, 2015 No comments: