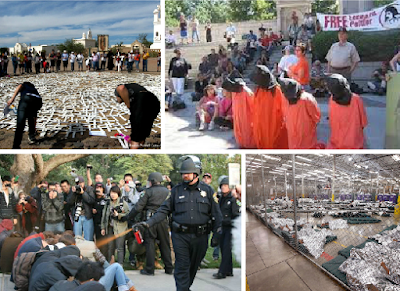 The United States is like that pretty girl in high school that thrives on her own self-promotion. But eventually the stardom wanes, the wrinkles take over, and well, its all down hill from there.

The US has a partner in self promotion at the United Nations, an ally in its cheerleading to distract from its human rights violations. Its fellow chum is Saudi Arabia, oozing in oil dollars and with an abhorrent human rights record. Both the US and Saudi Arabia want you to believe that they are standard bearers for human rights. Saudi Arabia even wants to head the UN Human Rights Council.

During the recent United States Periodic Review at the UN Human Rights Council in Geneva, there were so many lies and half-truths presented by the US that it would take too much space to replicate all of those lies regarding kidnapping and torture, massive spying, secret detentions, death by police, private prison profiteering, incarceration of migrant children, institutionalized racial profiling, rape in the US military, failure to provide services to veterans, targeted assassinations by drones, and violations of Native American rights.

The spin masters were there at the review, including Keith Harper, Cherokee, to try and make it all look good. But outside the United States, where there is not the constant bombardment of US government public relations presented as news, and corporate US media, the other countries can see the truth.

Lakota Russell Means often called these reviews, "another dog and pony show." In the US, there is a growing widespread lack of faith in these United Nations reviews. Increasingly, the UN is viewed as impotent to bring about change in the ongoing human rights violations of the US.

One of the outcomes that was censored by the media was the pressure for the US to prosecute CIA operatives responsible for torture.

The US death penalty, and execution of innocents, and abusive solitary confinement, were also issues avoided in the US media coverage of the UN review. The US media avoided discussions of the US role in child trafficking; homelessness and poverty; and the high rate of rape by fellow soldiers in the US military.

During the review, Bolivia pressed for implementation of the UN Declaration on the Rights of Indigenous Peoples, while Cuba pointed out the staggering poverty in the US which has resulted in widespread homelessness. Mexico pressed the US to halt illegal deadly force by US Border Patrol agents.

During the review, the US representatives attempted to distract from the truth in Indian country. They avoided mentioning the ongoing targeting of Indian lands for coal mines, uranium mines, oil and gas drilling and pipelines, copper mines, and nuclear dumping. There was no exposure of the widespread devastation and disease from mining, drilling and dumping in Indian country. The severe devastation spans from Navajo and Pueblo lands in the Southwest to the Mandan, Hidatsa and Arikara in North Dakota, Lakota in South Dakota and numerous Indian Nations in the Northwest. The US representatives avoided discussing how US mining companies are responsible for the assassinations, rape and disappearances of Indigenous Peoples around the world who are struggling to protect their homes, families, land, air and water.

The US representatives avoided discussing the unjust and high rate of the incarceration of American Indians in the US private-prison-for-profit empire.

The US representatives did not discuss the decades of spying and provocateurs in operations like COINTELPRO targeting American Indians, blacks and Chicanos, or the sterilization of American Indian women in Indian Health Service hospitals without their knowledge. There was no discussion of the ongoing theft of American Indian water rights being carried out by the US and states with Congressmen. There was no discussion of the generations of kidnapping, abuse and murder of Native American children in US government boarding schools, or the desecration of sacred land and incarceration of political prisoners.

There was no discussion of the fact that the Israeli Apartheid contractor Elbit Systems was given the US border contract and is now responsible for US spy towers aimed at traditional O'odham homes on Tohono O'odham land. There was no mention of the copper mine on sacred Apache land, promoted by Sen. John McCain, that was recently slipped in the defense bill.

The US representatives went to lengths to distract from the imprisonment of migrant children, a violation of international law, and the widespread neglect of sick and injured veterans. Further, rape in the US military, torture and spying were the focus of cover-ups by the US representatives during the review. 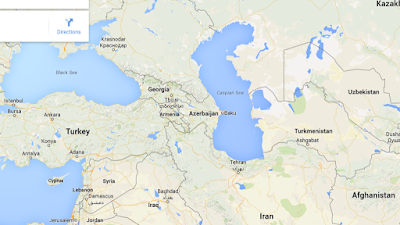 First off, while looking at the following Periodic Review, you might ask yourself, 'Where the heck is Azerbaijan and why do they know so much more than me about the United States human rights violations?' See map on left.

Here are the questions of Azerbaijan to the US at the UN Human Rights Council. Those questions are followed by advance questions from other countries.