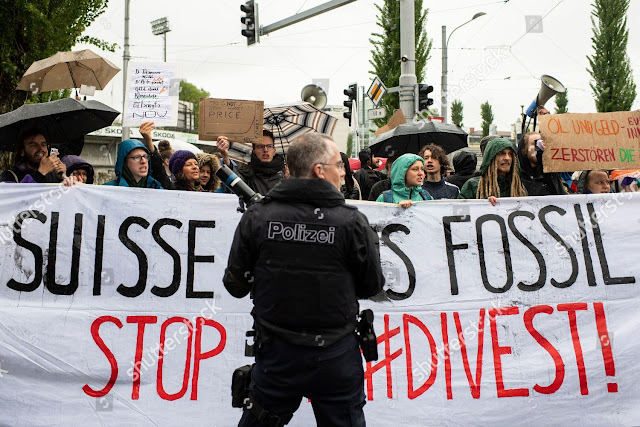 In response to the effort made by Credit Suisse, Dineh (Navajo) attorney Michelle Cook said more is needed. Referring to the Dakota Access Pipeline and the Standing Rock Water Protectors who stood against it, Cook said:

'Considering that Credit Suisse provided corporate finance, not project finance to DAPL, this provision will do little to prevent another scandal and indigenous human rights abuses from occurring. As expected they are only including this Free, Prior, and Informed Consent provision toward project finance and not towards all investments maintaining their legal fictions that human rights only apply to projects, not to their business partners and all investments. We are still demanding a remedy, and still demanding a total exclusion and banishment of companies like ETP and Enbridge from their investment portfolios for indigenous human rights violations. We are not finished with you yet Credit Suisse, you can bet on that!'

Thankful for all the hard work by indigenous divestment advocates, thankful to all the lawyers who collected the human rights violations at the encampments, and for the IPLP program who continues to submit these abuses to international human rights bodies to seek justice for victims of extractive industries and the criminalization of our movements!
#divest #divestinvestprotect #NODAPL #StopLine3 #indigenousrights #accountablility

By Society for Threatened Peoples

Today, the Society for Threatened Peoples (STP) and the Swiss bank Credit Suisse concluded a mediation process, facilitated by the Swiss National Contact Point (NCP), in the context of the OECD Guidelines for Multinational Enterprises. Credit Suisse has resolved to incorporate the protection of indigenous communities’ rights into its internal guidelines on project financing.

The STP welcomes this important step as a clear signal for the entire financial sector. However, it expects CS, as well as the other financial institutions, to extend this policy to all domains, such as company financing and stock broking. In addition, decisive action is expected in the event of breaches.


In April 2017, the STP filed a complaint against the Swiss bank Credit Suisse with the Swiss National Contact Point for the OECD Guidelines for Multinational Enterprises. This was triggered by the fact that, at the time, CS was maintaining key business relations with the firms that built the Dakota Access Pipeline (DAPL) in the USA. Thousands of indigenous people and water activists were protesting against the project because they feared the pipeline’s ecological risks. Unlike other banks, which partly withdrew from the project, CS never issued a public statement on the violent conflict around Standing Rock between the US authorities, the pipeline operators and the affected indigenous communities. Even the UN criticised the construction of the pipeline and the approval process.

Arbitration proceedings between the STP and CS began in spring 2018. As a result of this process, Credit Suisse agreed to incorporate the UN’s concept of “free, prior and informed consent” (FPIC) into its internal sector-specific guidelines on oil, gas, mining, forestry and agriculture, as well as to mention key components in its public summaries of these policies. In future, when financing projects that may have a negative impact on a region that is used or traditionally claimed by indigenous communities, CS will expect its customers to provide evidence that an amicable solution has been sought by means of active engagement with both the authorities and the affected indigenous communities, along the lines of FPIC.

“We welcome this improvement of the internal guidelines and acknowledge this as the bank’s first steps towards incorporating the rights of indigenous communities,” says Angela Mattli, campaign coordinator at STP. “At the same time, we note that CS is limiting its compliance with FPIC to project financing. Company financing and stock broking are excluded from these guidelines. The extension is therefore only a small step in the right direction when it comes to comprehensive protection of indigenous communities.” The Society for Threatened Peoples will monitor the implementation of the guidelines and expects CS to expand them soon, so as to include other business segments. CS is also expected to take decisive measures if the guidelines are not met.

The STP highly values the NCP as an accessible mechanism for mediating between companies and affected communities. At the same time, it wishes to emphasise that the OECD guidelines are not binding and that the NCP does not dispose of any means to impose measures. It should therefore by no means be understood as an alternative to the Responsible Business Initiative, which seeks to legally oblige companies to incorporate respect for human rights and the environment in all their business activities.National Contact Point of Switzerland Final Statement Specific Instance regarding Credit Suisse submitted by the Society for Threatened Peoples