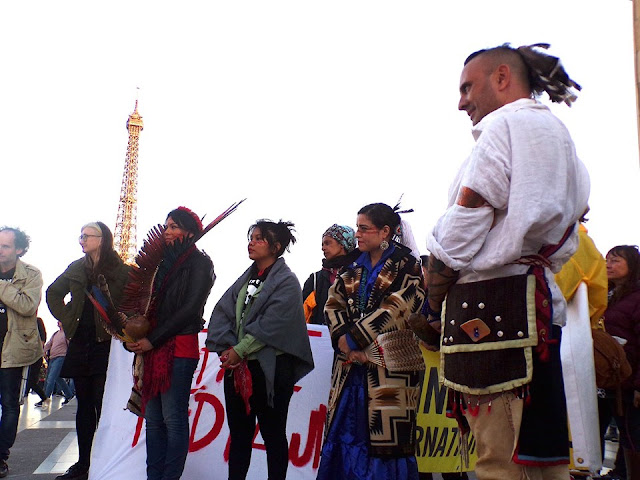 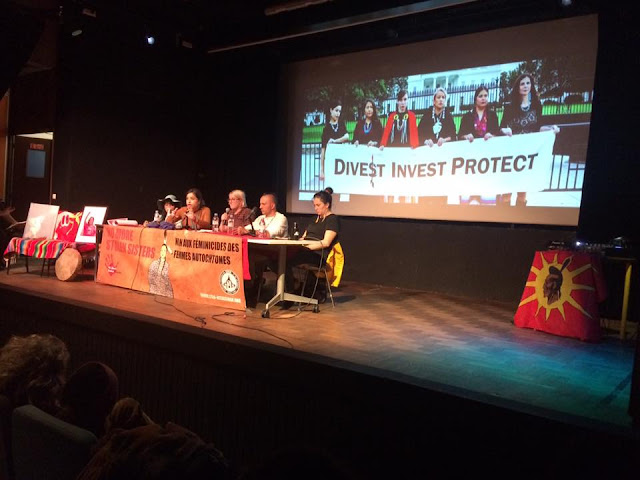 PARIS -- Divest Invest Protect, Ockway Bay, and the Committee In Solidarity with Indigenous Peoples of the Americas (CSIA-Nitassinan), are happy to announce their collaboration on Uncovering Capital’s Creation Story an indigenous-led European advocacy tour. The tour will face off with French financial industries and will examine the historic origins of European financial institution’s continued legacy of indigenous land dispossession and violent resource extraction through finance and banking. This tour invites the public to delve into the colonial roots of capital from an indigenous perspective.

CSIA-Nitassinan has a 41-year-long history of solidarity with indigenous peoples of the Americas based on the understanding that their over 500- year -long struggle for the inherent rights and treaty rights to their territories takes place within colonial nation-states and aims at recovering their sovereignty and protecting the Earth. A political and spiritual commitment for the benefit of future generations around the world.

Michelle Cook, Dineh human rights lawyer and founder of Divest Invest Protect writes, “An a-historical approach to finance will do little to transform the economic order that is based on the resource extraction, that drives racial, gender inequality and climate genocide. Without a historic understanding of the origins of western financial systems, we will simply repackage and perpetuate the very systems that have and continue to oppress us. Transforming these systems, not merely greenwashing them, will require critical interrogations that will rewrite and reexamine the history of finance from the perspective of those most targeted by it, indigenous women. History exposes how colonization, deeply entrenched in the DNA of capitalism, is predicated on the genocide of indigenous peoples and the enslavement of the so-called “New World”.

The indigenous-led divestment movement demands a full accounting of the financial industry's crimes against indigenous peoples' human rights historically and today. It is only through the deconstructing of this tired, old, outdated patriarchal economic system that we can arrive at the radical and necessary truths upon which to build visions of indigenous centered economic futures that are robust and equipped to heal and restore the earth and her peoples.”

CSIA writes, “France is investing public money collected with the pension funds in fossil fuel industry. Investments in Dakota Access Pipeline (DAPL) amount to 14.03 million euros to Energy Transfer Partners, 1.58 million euros to Sunoco, 21 million euros to TransMountain in Kinder Morgan and 47 million euros to Vinci. France is also investing in projects affecting the Amazonian region in Brazil by financing the French oil company Total. We are honored to stand with the indigenous-led divestment movement as allies. Together we are stronger.” http://www.csia-nitassinan.org/spip.php?article981.

In Paris France, the team will meet with Credit Agricole, the Ministry of Foreign Affairs, and members of the United Nations Education, Scientific, and Cultural Organization’s World Heritage Committee (UNESCO). They will also meet with the multi-billion dollar insurance company AG2R La Mondiale. In France the team will stand in solidarity with South American activists Daiara Tukano (Tukano from Brazil) and Clarisse Da Silva (Kali’na/ French Guyana).

In Geneva Switzerland, the team will participate with the Global Campaign to Reclaim Peoples Sovereignty, Dismantle Corporate Power and Stop Impunity. (Global Campaign) is a network of over 250 social movements, civil society organizations (CSOs), trade unions and communities affected by the activities of Transnational Corporations (TNCs). The Global Campaign is a peoples global structural response to unaccountable corporate power which provides facilitation for dialogue, strategizing, exchanging information and experiences, acting as a space for visibility of resistance and deepening of solidarity and support for struggles against TNCs. The Global Campaign:

Proposes an International Peoples Treaty which provides a political framework to support the local, national and international movements and communities in their resistances and practices of alternatives to corporate power and the Transnational Corporations (TNC) model of the economy.

Participates in the campaign for the UN Binding Treaty to regulate Transnational Corporations (TNC), stop human rights violations, and end impunity and ensure access to justice for affected communities.

Hartman Deetz, Mashpee Wampanoag has been active in Native and environmental movements for over 20 years and is pushing for the passage of the Mashpee Reservation Reaffirmation Act to restore indigenous lands to the Mashpee Tribe of Indians is one of the 2019 divestment delegates.

Deetz writes, “As we use language such as globalization or neo-colonialism to speak of the modern era of corporations worldwide, it is important to remember that corporate interests and corporate charters have been at the heart of the colonial systems of the Americas since 1492. The Hudson Bay Company, the Massachusetts Bay Company, the Virginia Company, all of these colonies that began as corporate charters. The driving force for colonization as written in their charters for incorporation has always been the extraction of natural resources into commodities to convert into monetary wealth.

Then as now, these corporations have sought to undermine indigenous law and jurisdiction, leveraging use of private armies or security forces to enforce their regimes. The practices of environmental destruction, forced relocation, and the leveraging of personal debt and taxation have all served to dispossess indigenous peoples of their rightful inheritance from their lands. All of this has been done for hundreds of years with the purpose of concentrating the wealth and power of the world into the hands of a small number of individuals, at the expense of the majority of the world.”

Divest Invest Protect is humbled and grateful for this opportunity to share our work with the European public! We are thankful to all our supporters and allies who make this vital work possible! 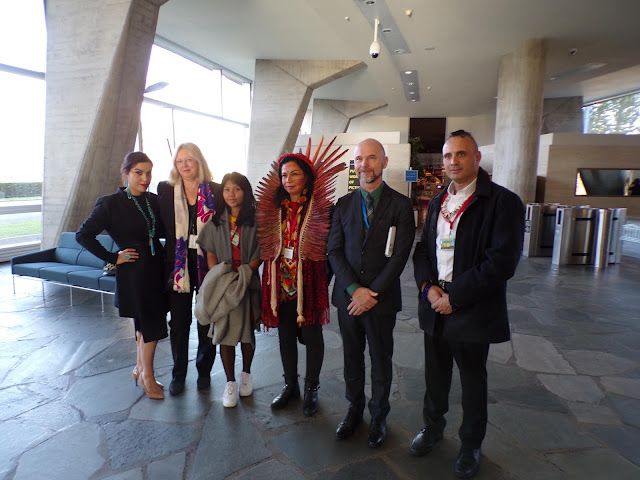 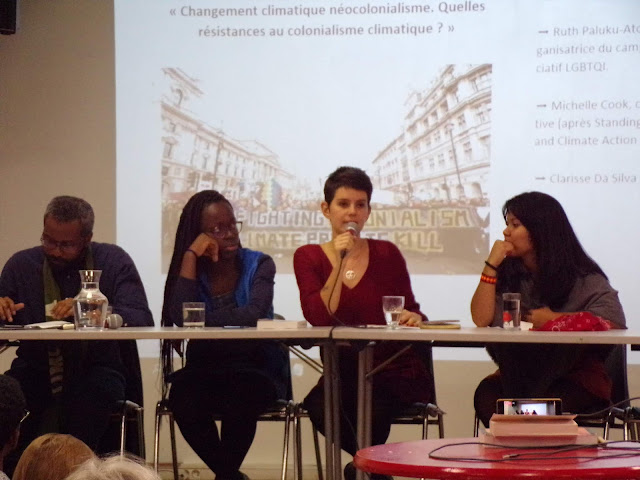 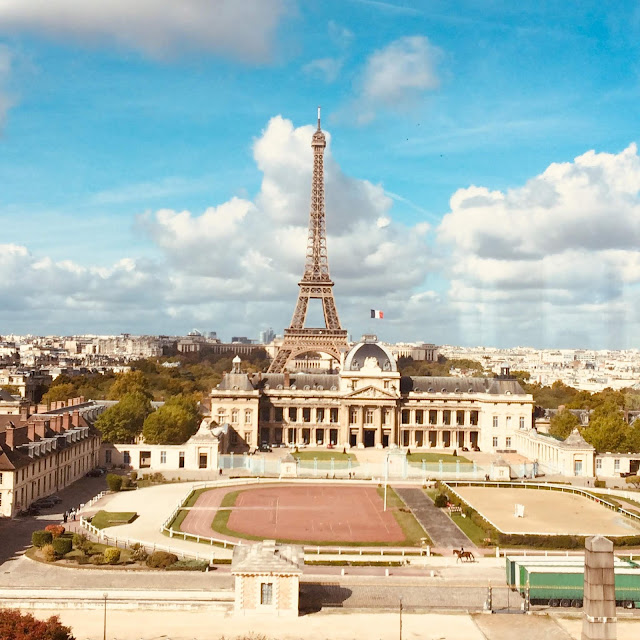