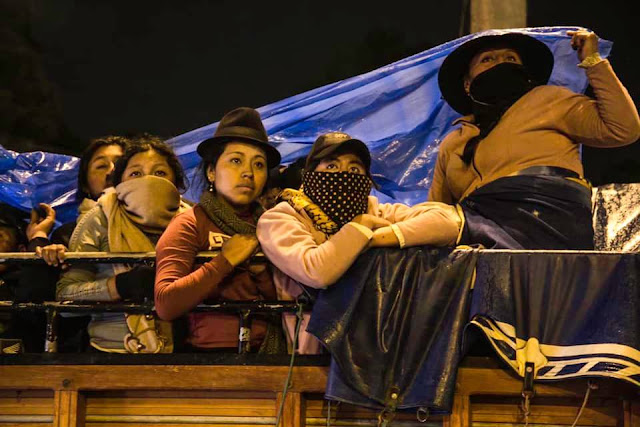 Amazon Frontlines
HAPPENING NOW in Ecuador: Over 20,000 indigenous peoples from the Amazon to the Andes are mobilizing to Quito, Ecuador’s capital city, as part of a nationwide mobilization aimed at reversing a series of government-imposed economic austerity measures that, protesters say, will deepen social inequalities, fuel environmental degradation, and lock Ecuador in a short-sighted economic system premised on the unsustainable extraction of natural resources.
Hundreds of protesters have been jailed, and human rights groups, including Amazon Frontlines, have issued reports citing widespread human rights violations.
“We call on the Ecuadorian government to repeal the recently announced austerity measures, cancel the agreement with the International Monetary Fund and respect indigenous peoples’ decision to keep our territories free of extractive industries”, national and regional organizations CONAIE and CONFENIAE have declared.

Quito, Ecuador—October 8th, 2019 – Indigenous peoples across Ecuador have mobilized against the central government’s neoliberal policies and extractive practices, as have workers unions, student unions and a diverse group of civil society. Our civil disobedience has included marches, road blocks, and the detention of military and police personnel accused of violence and aggression within indigenous territories. Currently, over 20,000 indigenous peoples from the Andes to the Amazon are marching to the capital city of Quito in indefinite protest.

Our movement aims to reverse the Ecuadorian government’s closed-door agreement with the International Monetary Fund and protect our territories from the social, economic and environmental fallout of the accelerated extractive agenda that will follow. This is not simply about gasoline subsidies. The austerity measures of President Lenin Moreno will widen inequality and marginalization of indigenous peoples. Paired with the recent announcement of Ecuador to leave OPEC (Organization of the Petroleum Exporting Countries), they are clear indicators that the government will ramp up devastating oil, mining and hydroelectric projects in indigenous territories. For centuries we have protected our lands in the mountains and the Amazon, and we will not allow indigenous peoples, indigenous territories and our global climate to pay the cost for the government’s mounting debt to China and international lenders.

These political decisions and policies were made in the capital without our consent or input, yet they affect our rights and our ability to survive. We have shown throughout Ecuador’s history that indigenous peoples have the power to shut down the country when our rights are put at risk and power is abused. Once again, we are putting our bodies and our lives on the line to protect our families, rights, cultures and territories, this time from the central government’s neoliberal assault.

We denounce the campaigns of misinformation promoted by the central government and by both national and international media outlets. Opportunists, both politicians and looters, are attempting to co-opt the indigenous movement and distort our message. This inflames violence and division. We repudiate the violence, vandalism and looting by external actors who are not affiliated with our movement or goals. The government must reverse its declaration of a State of Emergency, which facilitates widespread police and military violence, arbitrary detentions and the suspension of fundamental rights.

We call on the Ecuadorian government to repeal the recently announced austerity measures, cancel the agreement with the International Monetary Fund and respect indigenous peoples’ decision to keep our territories free of extractive industries. 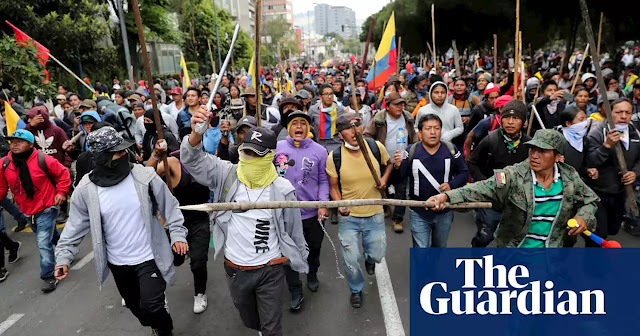 Read more at The Guardian:
Ecuador's President Moves Government out of Quito

Thousands of indigenous protesters have converged on Ecuador’s capital after anti-government demonstrations and clashes prompted the president to move his besieged administration out of Quito. On Tuesday afternoon, one group of protesters burst through security lines and briefly surged into the country’s National Assembly, before they were forced out by police firing tear gas. The legislature was not sitting at the time. Elsewhere, masked and stick-wielding protesters hurled stones and battled with security forces, who responded with tear gas. Read more:
https://www.theguardian.com/world/2019/oct/08/protesters-swarm-ecuador-capital-as-president-moves-out

(Below) Demonstrators clashed with riot police near the national assembly in Quito on Tuesday following days of protests against the sharp rise in fuel prices sparked by authorities' decision to scrap subsidies.MARTIN BERNETTI/AFP VIA GETTY IMAGES
Boston Globe 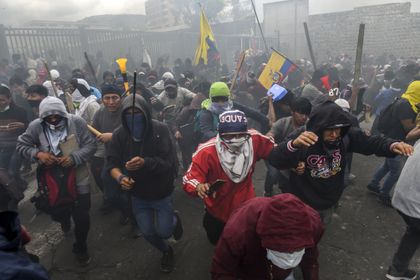