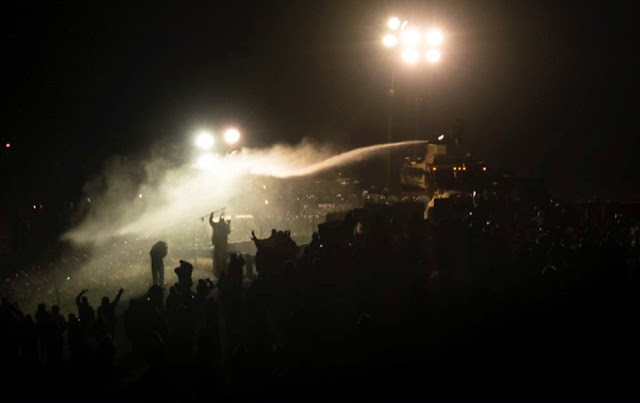 In a searing report submitted to the United Nations on October 3, 2019, Water Protectors Legal Collective and the University of Arizona Indigenous Peoples Law and Policy Program (IPLP) document: 1) disproportionate punishment of indigenous environmental activism in the United States; 2) state and private collaboration to violate the civil rights of water protectors; 3) legislation intended to suppress resistance to the fossil fuel industry; and 4) the US’ failure to comply with its treaty obligations to indigenous peoples.

Through the Universal Periodic Review (UPR) process, the UN Human Rights Council will be reviewing the United States in May 2020 to assess its human rights records, address any human rights violations and make recommendations for redress. The report to the UN builds on WPLC and IPLP’s ongoing work to bring the voices of indigenous environmental and human rights defenders to the international community and bring international scrutiny to the criminalization and repression of indigenous resistance to extractive industries in the United States.

Diné (Navajo) human rights lawyer Michelle Cook said, “The United States should be protecting Indigenous peoples from all forms of violence; including the use of excessive force by police and private security. Without accountability for the harms which have occurred in Standing Rock the US sets a dangerous standard where colonial legacies of violent resource extraction continue.”

WPLC board member and tribal judge Holly Bird added, “We hope that entering the evidence of the violations of the human rights of water and land protectors into the international record will provide protectors, activists, indigenous nations, scholars, diplomats, and policy makers with another tool to combat extraction and the ongoing process of settler-colonialism.“

WPLC facilitated defense for 841 people who were arrested in pipeline protests at Standing Rock in North Dakota, resulting in only 28 convictions, with more than half the state criminal cases dismissed or acquitted at trial. WPLC is a Native led organization that provides criminal and civil legal representation to Indigenous and other people engaged in Native led environmental actions affecting Native land.

Googlw is CENSORING this site.
It also comes up with UNSAFE warning!
Could it be because ELBIT exposure?
FUCK GOOGLE

Keepp on keeping on!