Inspiration in the Borderlands: On the Road to Arivaca 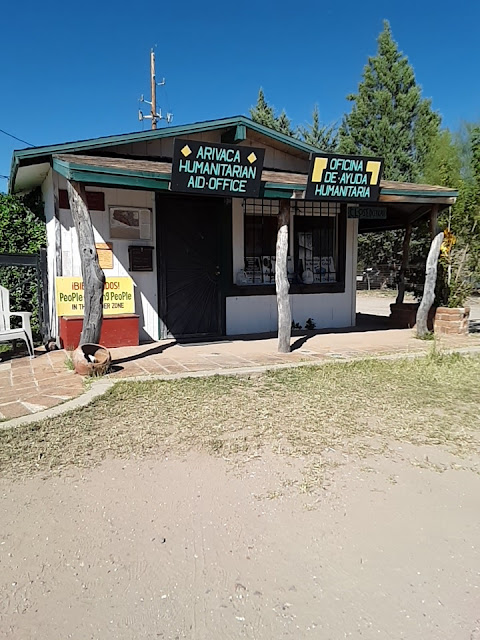 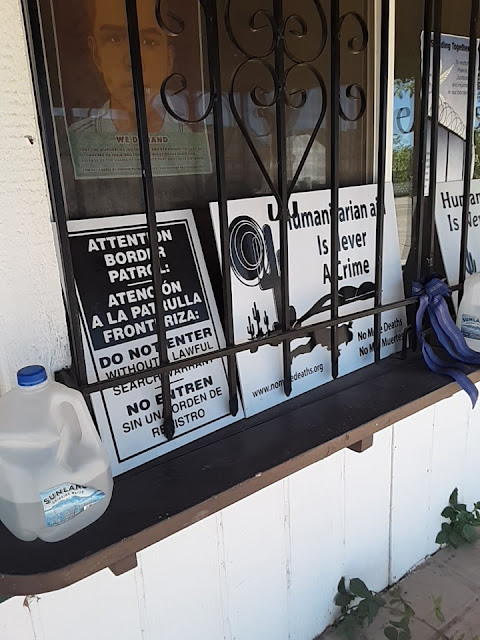 There is the simple wild of Sasabe, on the border frontier where few people go, and there is Arivaca.

With its ranchers and artists, its hummingbirds and promise, there is a stop at the eatery. Here there is the sign: "Unwanted: Members of any vigilante border militia group, including, but not limited to AZ Border Recon. Do Not Enter our Establishment."

"We have the right to refuse service to anyone we deem undesirable."

Across the street, migrants are welcomed. A gallon of water is waiting and the sign, "Humanitarian aid is never a crime."

"Attention Border Patrol do not enter without a legal search warrant."

The trails and raids, the Minutemen and their horror, are part of the history here.

Today, I choose to remember the time when the Arivaca community came together to speak out against the spy towers here. There were hundreds of hummingbirds coming and going, feeding at the long line of hummingbird feeders dangling from the porch of the coffee shop. Later, the people flew their kites to mess with the signals from the spy tower. But it didn't matter, those first billion-dollar spy towers were a flop.

Now, we drive along, years later, appreciating the power, beauty, and grace of Arivaca and the Borderlands.

Earlier, in Nogales, the razor wire curled on the border fence. A snarling sign of Apartheid where families live, work and play, on both sides of the border.

The U.S. Border Patrol sit in their patrol cars looking through the ribs of the wall, peering into Nogales, in the State of Sonora, Mexico. There is an uneasy feeling here, a feeling of evil driving down this dirt road. There is the sinister reminder that a United States Border Patrol agent shot through this wall and murdered a teenager in Mexico.

The U.S. Border Patrol sit along the borderline like stalkers of children.

Nearby, the migrants are held in detention. They have traveled across countries with babies and children. Before them is the promised land, the land of hope. They are given no water, and only crackers to eat in detention.

The wall must come down. The Berlin Wall came down. Apartheid ended in South Africa. The United States has taken a time machine backward as in a B-rated movie.

And until the wall comes down, there is still this: A sign welcoming migrants. A sign telling armed white racist militia to keep out.

Before turning and heading back to Tucson, there is a stop at Three Points. I enjoy remembering sitting here years ago when it was 112 degrees out and documenting the U.S. Border Patrol agents eating their munchies and throwing their trash on the ground; documenting the U.S. Border Patrol agents sitting in their air-conditioned patrol units and chatting on their cellphones.

All along the border today, it is peaceful. There is seldom a car on the long stretch from Nogales to Arivaca, Sasabe, and Three Points. There are no signs of migrants. There is no one walking, and no one is signaling for help. There are no white flags tied to a creosote bush, no cries for help. Most of the migrants seem to be languishing in Mexico, without a country, rejected by the political elite who decide who lives and dies, who goes without food and water; who is given a chance to work, and who suffers in a private prison-for-profit. The large buses that once sat at Three Points and waited to be filled with migrants for contract cash, for transportation to detention and imprisonment, are nowhere in sight.

It is a peaceful day in the border and I would not want to be anywhere else.


More:
"There's something about the militia movement which is just bone-chilling to me," says Maggie Milinovitch, co-owner of La Gitana Cantina. The owners have banned militia members from the establishment: "We just decided it was worth taking a stand."Listen and read more at the courageous women and men of Arivaca on Tulsa Public Radio: Militia test civility of Arizona border town here.