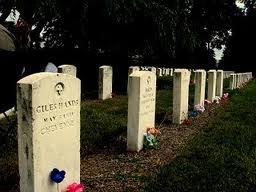 CARLISLE, Penn. -- Lakota Nick Estes writes in a new article about the generations of Indian children stolen by the United States. Many of those children never came home. They died of starvation, pneumonia, beatings and other abuse. Across North America, Australia and New Zealand, Indigenous children were routinely stolen and forced into residential schools where many died.

In Estes' article, 'The U.S. Stole Generations of Indian Children to Open the West,' at High Country News, he writes, "Nearly 200 Native children lie buried at the entrance of the Carlisle Barracks in the “Indian Cemetery” — the first thing you see when entering one of the United States’ oldest military installations. It is a grisly monument to the country’s most infamous boarding school, the Carlisle Indian Industrial School, which opened in 1879 in Carlisle, Pennsylvania, and closed in 1918. Chiseled onto the white granite headstones, arranged in the uniform rows typical of veterans’ cemeteries in the U.S., are the names and tribal affiliations of children who came to Carlisle but never left. Thirteen gravestones list neither name nor tribe; they simply read 'UNKNOWN.'”
Read more here.

Today. President Trump and those who follow his orders are responsible for the incarceration of children in migrant prisons, where they are starved, sexually abused, drugged and beaten. Numerous have died while others suffer without medicine and treatment. Separated from their families, they languish in hopeless jail cells, while other stolen migrant children have been adopted in illegal acts. Many of these children are Indigenous from Mexico and Central America. The abuse and theft of children have been well documented by the media and members of the U.S. Congress.

It is time for Nuremberg style trials, which will prosecute Trump and all those who carried out his orders in the theft, incarceration and abuse of migrant children, as was done with those who followed Hitler's orders.

Estes writes, "Although Luther Standing Bear eventually returned to his home at the Rosebud Agency, many of his peers didn’t. 'The change in clothing, housing, food, and confinement combined with lonesomeness,' Standing Bear reasoned, “was too much.” He estimated that in the first three years at Carlisle, nearly half the Lakota children of his class died. 'In the graveyard at Carlisle most of the graves are those of little ones,' he lamented."

On the Longest Walk 2008, I photographed the cemetery at Carlisle Indian School to share with the families of the Children Who Never Came Home. At Carlisle, there were 10,000 Indian children in the boarding school between 1879 and 1918. There are 186 graves that are marked with a tombstone. An unknown number of children were buried without markers. Many of those who died were Lakotas, Cheyenne and Apache, known as fierce fighters, who no doubt fought for their freedom and justice. The children were stolen from all across the United States.