His Holiness the 14th Dalai Lama and Nobel Peace Laureates Rigoberta Menchu of Guatemala and Archbishop Desmund Tutu of South Africa, joined six other Nobel Peace Laureates urging President Obama to reject the Keystone XL pipeline, an environmental disaster in the making.
The Nobel Peace Laureates recognized those arrested during the past two weeks of sit-ins at the White House. The 1,252 arrested included members of the Indigenous Environmental Network arrested with author and activist Naomi Klein. First Nations from Canada arrested included actress Tantoo Cardinal, Cree, from Alberta, Canada, where tar sands mining is already destroying the homelands of First Nations.
Debra White Plume, Owe Aku, Bring Back the Way, Lakota grandmother and activist from Oglala land in Pine Ridge, South Dakota, was arrested in the Indigenous delegation. After being released from jail, White Plume, along with Kandi Mossett of the Indigenous Environmental Network, met with US State Department official Daniel A. Clune, Principal Deputy Assistant Secretary for Environmental and Scientific Affairs. There they urged the State Department to consult at high levels with Native leaders and to consider Section 106 (tribal consultations) in line with free, prior and informed consent as set forth in the Declaration on the Rights of Indigenous Peoples.
Mossett has lost two young friends to deaths because of the heavy oil and gas traffic that the boom industry has brought to her homeland of the Mandan, Hidatsa and Arikara in North Dakota. Mossett sent a message to President Obama, to look her in the eyes and listen to her story before approving the tarsands pipeline. During the arrests in front of the White House, Obama did not acknowledge or address the protesters, which included Dene Chief Bill Erasmus from Yellowknife, Canada.
The Nobel Peace Laureates reminded Obama of his own promise for creating a clean energy economy. The Nobel Peace Laureates' statement comes as another dirty war was waged over the dirty tar sands. In the dirty war of deceptive media, a tarsands campaign was waged on the Oprah Winfrey Network by the so-called "Ethical Oil" campaign which attempts to muddy the truth about the tarsands. This dirty media campaign promotes the tarsands by muddying the water about human rights. A counter-campaign called for a boycott of the Oprah Winfrey Network on Wednesday until the "Ethical Oil" advertisements cease.
The Nobel Peace Laureates point out the immense Ogallala aquifer in the Great Plains, in the heartland of the United States, which the proposed tarsands pipeline would cross, if approved. Those lands, between Alberta, Canada and Texas, include Indian country. The highly corrosive tarsands oil is likely to result in a pipeline spill and contaminate the region's drinking water in the Ogallala aquifer. The danger to this water source brought Nebraska farmers to the White House where they were arrested during the past two weeks.
Dear President Obama,

We—a group of Nobel Peace Laureates—are writing today to ask you to do the right thing for our environment and reject the proposal to build the Keystone XL, a 1700-mile pipeline that would stretch from Canada’s Alberta tar sands to the Texas Gulf Coast.

It is your decision to make.

The night you were nominated for president, you told the world that under your leadership—and working together—the rise of the oceans will begin to slow and the planet will begin to heal. You spoke of creating a clean energy economy. This is a critical moment to make good on that pledge, and make a lasting contribution to the health and well being of everyone of this planet.

In asking you to make this decision, we recognize the more than 1200 Americans who risked arrest to protest in front of the White House between August 20th and September 3rd. These brave individuals have spoken movingly about experiencing the power of nonviolence in facing authority. They represent millions of people whose lives and livelihoods will be affected by construction and operation of the pipeline in Alberta, Montana, South Dakota, Nebraska, Kansas, Oklahoma and Texas.

All along its prospective route, the pipeline endangers farms, wildlife and precious water aquifers—including the Ogallala Aquifer, the US’ main source of freshwater for America’s heartland. We are aware that Nebraska’s Governor Dave Heineman—as well as two Nebraska Senators—has urged you to reconsider the pathway of the pipeline. In his letter to you he clearly stated his concern about the threat to this crucial water source for Nebraska’s farmers and ranchers. The aquifer supplies drinking water to two million people in Nebraska and seven other states. We know that another pipeline that covers some of the same route as the proposed pipeline, and built by the same company proposing to build Keystone XL, already leaked 14 times over its first year of operation. Like you, we understand that strip-mining and drilling tar sands from under Alberta’s Boreal forests and then transporting thousands of barrels of oil a day from Canada through to Texas will not only hurt people in the US—but will also endanger the entire planet. After the oil fields of Saudi Arabia, the full development of the Alberta tar sands will create the world’s second largest potential source of global warming gases. As NASA climatologist James Hansen has said, this is “essentially game over for the climate.”

There is a better way.

Your rejection of the pipeline provides a tremendous opportunity to begin transition away from our dependence on oil, coal and gas and instead increase investments in renewable energies and energy efficiency.

We urge you to say ‘no’ to the plan proposed by the Canadian-based company TransCanada to build the Keystone XL, and to turn your attention back to supporting renewable sources of energy and clean transportation solutions. This will be your legacy to Americans and the global community: energy that sustains the lives and livelihoods of future generations.

The Defining Moment for the Environmental Movement: The two week Tar Sands Action at the White House, including Gitz Crazyboy, Dene/Blood from Canada and Kandi Mossett, Hidatsa, Mandan and Arikara from North Dakota.
at September 07, 2011 No comments:

Author and activist Naomi Klein debunks 'Ethical Oil' at the Tar Sands Action.
Klein was arrested at the White House with a delegation from the Indigenous Environmental Network on Friday, Sept. 2, 2011, during the two weeks of sit-ins to halt the tar sands pipeline. They were among 1,252 people arrested.
at September 07, 2011 No comments: 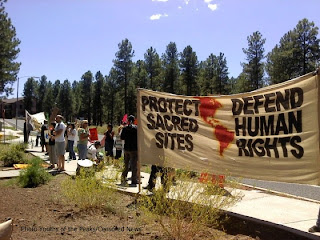 FLAGSTAFF, Ariz. -- UN Special Rapporteur James Anaya submitted a report to the UN Human Rights Council stating alleged human rights violations of indigenous peoples around the world. In the US, the report includes the plan to violate sacred San Francisco Peaks with snow made from wastewater. The report also includes the case of imprisoned Leonard Peltier and the protection of sacred Sogorea Te (Glen Cove in Calif.)

The international cases of human rights abuses include the Wixarika (Huicholes) in Mexico struggling to protect their sacred lands from mining, along with cases from indigenous peoples in Guatemala, Chile, Israel, Ethiopia, Costa Rica, Malaysia and Thailand, in Anaya's Aug. 22 report.

Anaya urged the US to review the need to protect sacred San Francisco Peaks from the plan to use recycled wastewater for snowmaking by the private corporation Arizona Snowbowl. Further, Anaya urged the US to carry out consultation with American Indian Nations as required by US law and in accordance with international human rights obligations.

Anaya, pointing out the sacred nature of San Francisco Peaks to area Indian Nations, said, "To them, the sacredness of the San Francisco Peaks depends on the purity of the water and plant life in the area, which allegedly will be contaminated if wastewater is introduced into the Peaks through the planned artificial snowmaking."

Anaya states San Francisco Peaks is sacred to 13 area American Indian Nations and points out the specifics of the connections of Hopi and Navajo to the sacred mountain.

In his recommendations to the UN Human Rights Council, Anaya said the US should give serious consideration to suspending the permit for the Arizona Snowbowl.

"In this connection, the Government should reinitiate or continue consultations with the tribes whose religions practices are affected by the ski operations on the San Francisco Peaks and endeavor to reach agreement with them on the development of the ski area. The Government should give serious consideration to suspending the permit for the modifications of Snowbowl until such agreement can be achieved or until, in the absence of such an agreement, a written determination is made by a competent government authority that the final decision about the ski area modifications is in accordance with the United States’ international human rights obligations."