Naomi Wolf describes arrest, and the cell with blood or feces on wall
By Brenda Norrell Censored News
http://www.bsnorrell.blogspot.com

New York In the big Occupy news tonight from Wall Street, feminist author Naomi Wolf was arrested on the sidewalk in front of an event she was attending.

Wolf was taken into custody at an award ceremony held to honor New York's governor. Wolf and a companion were handcuffed outside Skylight Studios in Manhattan where Gov. Andrew Cuomo was to accept the "Game Changer of the Year Award" from The Huffington Post, according to AP.
Wolf, a political activist and author of the best-selling book "The Beauty Myth," was taken into custody by police as about 50 protesters gathered outside on the sidewalk.
Wolf describes arrest and cell
Wolf said on Facebook, "I have been released from custody. I was completely complying with the law and the permit as it was described to me by police and I was arrested for standing lawfully on the sidewalk. I will post more tomorrow. Thank you for your messages of support."
Then, Wolf added, "Thank you all again for your support. Given the coverage, I feel that I should put on record a nit of what happened, full details in the am. The protesters were being told that they needed to leave the sidewalk outside of the Huffington Post event because 'Huffington Post had a permit' to control the use of the sidewalk. I have a chapter in Give Me Liberty on NYC permits so I knew that could not be accurate. Sidewalks are public spaces and can't be leased by private entities. I asked for a copy of the permit. A spokesman finally acknowledged that the permit allowed for pedestrian access as long as it did not obstruct foot traffic on the sidewalk."
Wolf continues, "Sorry, "a bit." I said, okay, we won't obstruct pedestrian traffic, we will just walk. SO I invited the OWS protesters to come back from across the street and walk with me in a single file so no one obstructed the flow of pedestrians. A phalanx of white-shirted police then approached us and with a megaphone said, "You are disobeying a lawful order to disperse and will be arrested. I approached (respectfully and peacefully) the officer with the megaphone and said I was confused: the permit allowed us to walk if we did not obstruct traffic and we were not doing so. He stood before me and said, "Will you get out of my way?" I did not say anything but I could not fall back because I knew he was misinterpreting the law. The sidewalks were being properly handled by the protesters even according to the restrictive permit. I did not step aside so he indicated that I should be cuffed, and my hands were cuffed behind me with plastic handcuffs."
"My partner and I were taken, cuffed, in a police van to I believe the seventh precinct (they had planned to take us to the first, I am so grateful to protesters who appeared on our behalf at the first) where we were held in separate cells for about half an hour. My cell had blood or feces on the wall. The staff were very courteous. But I was told that I would be released with a summons but that if I rejoined the protesters and got arrested my fingerprints would be taken, the sergeant gestured at a camera and said my photo would be taken, it would all be entered into a federal database and follow me forever. He also said if I spoke I should be careful not to say anything that could be construed as 'inciting a riot.' I said hadn't broken the law -- my summons was for 'disorderly conduct.'"
"Many witnesses will confirm I stood perfectly still and addressed the officer with great courtesy. I said that we hadn't broken the law according to the permit in question. He said that when an officer deems a situation as safety issue, it trumps the permit. I asked, then how can any situation not be subject to an officer deeming it a 'safety issue?'"
"He did not explain but gave me a section of the criminal code to look up. I was arrested for disorderly conduct although my conduct was peaceful respectful law-abiding and orderly. I was arrested for not backing down when a police officer told me contrary to what I knew about the law and the permit process that a private entity owned the sidewalk. He was mistaken and I was correct. I behaved entirely lawfully and my arrest was unlawful."
New Mexico: The Occupy Albuquerque moment has renamed itself Unoccupy Albuquerque, out of respect for Native Americans: http://www.americanindependent.com/199655/occupy-movement-in-new-mexico-finds-new-name-out-of-respect-for-native-americans
Arizona It turns out the heavily-armed militia that showed up for the Occupy Phoenix blast-off were not there to counter-protest, but to join the movement. One of the militia contacted Censored News to explain that not all of the militia there were members of the white supremacists' National Socialist Movement, like JT Ready who was present and heavily-armed.
The Phoenix Class War Council of anarchists explains what happened on Saturday when the militia showed up with assault weapons at Occupy Phoenix. http://bsnorrell.blogspot.com/2011/10/neo-nazis-show-up-armed-to-counter.html
New York: A police officer who pepper sprayed Occupy Wall Street protesters faces discipline: Ten days possible loss of vacation. http://www.nytimes.com/2011/10/19/nyregion/commander-who-pepper-sprayed-wall-street-protesters-faces-disciplinary-charges.html
Finally, some good news.
Colorado Taylor McKinnon said, "Today, owing to the good work of Center for Biological Diversity, Sheep Mountain Alliance, Rocky Mountain Wild, Energy Minerals Law Center and Western Mining Action Project, 43 uranium mines, 31 lease tracks, all associated exploration and drilling, and an entire 42 square mile uranium leasing program in southwestern Colorado, was shut down by a federal judge."
McKinnon added, "Yes, the plaintiffs will issue a press release tomorrow. To my knowledge this is the largest singular shut-down of uranium mining activity in the history of U.S. public lands.  Notable are the excellent attorneys who constructed and argued this case--Travis Stills, Jeff Parsons, and Amy Atwood."
Since Twitter, and its ugly twin Facebook, are far better to watch at night than television, if I had one, I'll keep you updated here at Censored News.
.
Earlier interview: Naomi Wolf: 'Obama can lock any US citizen up without trial'
at October 18, 2011 No comments: 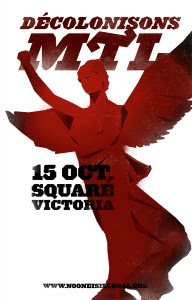 An anti-colonial contingent joining and supporting protesters at Occupy Montreal
In solidarity with Occupy Wall Street actions worldwide
SQUARE VICTORIA
- Near métro Square Victoria
- This is a family-friendly contingent.
We stand in solidarity with demonstrators in New York, Boston, and countless other American cities, in rejection of this capitalist system and the misery it brings. We also recognize that those cities, like Montreal, are already occupied territory. We stand against colonialism and in support of Indigenous peoples across Turtle Island struggling for land, autonomy, and dignity. We stand against patriarchy and racism, and for the self-determination of all peoples. We are also inspired by uprisings for justice and dignity around the world, from Egypt to Chile, from Greece to South Korea.
We fundamentally reject the notion that the police are “potential allies” of our movements, and call attention to the bloody and ongoing history of police impunity and killings in Montreal. We support a respect for a diversity of tactics and a culture of solidarity and mutual aid, not division, within our struggles.

From Mohawk resistance to niobium mining in Kanehsatake, to community solidarity in the face of police repression in Montréal Nord; from anti-gentrification and social housing struggles in Montreal’s working class neighborhoods, to solidarity and support efforts with non-status migrant, this city is vibrant with people’s struggles for justice.In particular, we support two upcoming efforts: the October 22 March and Vigil for Justice for the Victims of Police Killings (info: http://www.22octobre.net); and the November 3 Anti-Capitalist Demonstration Against the G20, Canadian imperialism and the Conservative government, in solidarity with protests in Cannes and with G20 Toronto defendants (for details see www.clac-montreal.net).
———-
This family-friendly contingent is currently supported by members of No One is Illegal-Montreal, the Indigenous Solidarity Committee and Solidarity Across Borders.
If your group, collective or organization also publicly supports this contingent, please e-mail solidaritesansfrontieres@gmail.com
INFO: indigenoussolidaritymontreal@gmail.com