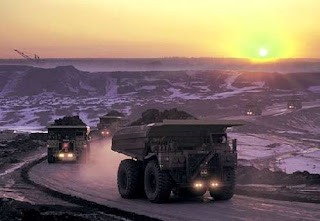 Fort McMurray, AB October 1, 2012 – Today the Athabasca Chipewyan First Nation filed a constitutional challenge in the Joint Review process against Shell Oil Canada’s application for the expansion of their Jackpine Mine tar sands project. ACFN’s challenge outlines the government’s failure to uphold Treaty 8, and to force better protection of the resources needed to sustain rights protected under Treaty 8. A constitutional challenge based on Treaty 8 rights has never been fully argued in front of an Alberta Joint Review panel and the first nation hopes to set new precedents that may mean changes to the regulatory process.
“We have repeatedly tried to engage with both the government and Shell to find better way to address our rights,” stated Chief Adam of the Athabasca Chipewyan First Nation. “However, the government has not listened to us or made meaningful attempts to accommodate the ACFN in relation to the impacts of this and other tar sands projects. They have failed to accurately inform themselves of what our people truly require in order to protect our lands and rights.”
The Jackpine Mine expansion application is scheduled to appear before the Joint Review Panel starting Oct. 29 in Fort McMurray, Alberta. However, the Panel is required to hear constitutional challenges on October 23rd before the full public hearings. The proposed application would require the disturbance of 12,719 ha of land and destroy 21 kilometres of the Muskeg River, a culturally significant river. Greenhouse gas emissions from the Jackpine expansion will total 2.36 Mt CO2e/year, representing an increase of 5.2% in oil sands emissions (based on 2009) or approximately 281,000 cars on the road.
The ACFN is hoping this constitutional challenge will clearly demonstrate the severe adverse impacts on their Treaty 8 rights due to tar sands development in northern Alberta. The ACFN asserts that government action is leading to the removal of ACFN’s ability to meaningfully exercise their Treaty 8 rights within their traditional territory.
“Our community and our leadership at ACFN are taking the steps to slow down development in Northern Alberta in order to ensure our rights and lands are protected now and into the future,” stated Eriel Deranger communications coordinator for the ACFN. “As Denesuline people, it is our responsibility to protect our lands, our rights and all that mother earth provides for our people. We hope people will support us as we put forward ground breaking challenges in Alberta.”