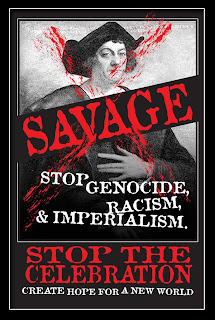 This year in Pueblo, the birthplace of C-Day

Where Meet at Henkle Park, Pueblo, CO, on Abriendo Avenue, between

Ramona and Penn Streets at 9am. March to Columbus statue for rally at

10 am, in front of Rawlings Library, 100 Abriendo Avenue, Pueblo.

Directions from Denversouth on I-25, through Pueblo to Exit 87B (Abriendo Ave.)

follow the curve to the right, and stay on Abriendo approximately four blocks.

began in Pueblo in 1905. Annually, there is an honoring of Columbus at the Columbus statue

in downtown Pueblo, across from the new public library (100 Abriendo Ave.). We believe

that libraries should be a source for education, for cultural competency, and for historical

accuracy. Colorado AIM will join our relatives in Pueblo this year, to stand against the

racism of Columbus Day, to set the historical record straight about the so-called Doctrine of

Discovery and the racist legacy of Columbus & Columbus Day, and to be living proof that

indigenous peoples are not “discovered,” “conquered,” or disappearing from our homeland.