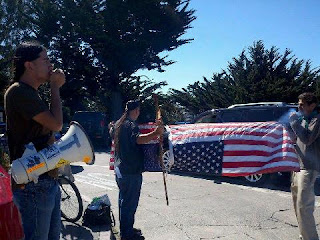 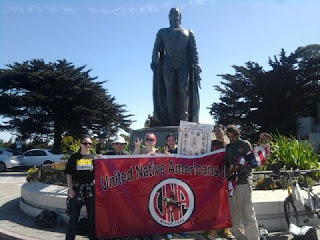 INDIGENOUS DAY OF RESISTANCE INDIGENOUS RIGHTS RALLY and MARCH to Decolonize the World on the Truth of Christoper Columbus & his Insidious Hate Crimes he Committed Against the Indigenous Peoples of The Americas Known as Turtle Island.

Press Conference from Noon to 1:00pm at Coit Tower in Front of the Columbus Statue


Ending the 144 Year Celebration of Christopher Columbus and Ending 520 Years and Counting of Genocide inflicted on the Indigenous People of the Americas.

1876 California accepted a Christopher Columbus and Queen Isabella Statue from Darius Ogden. The statue is displayed in the Rotunda of the State Capital. Valued at $30,000, it was crafted by Larkin G. Mead in Florence, Italy.

1892 President Harrison declared October 12, 1492 as the day America was discovered by Christopher Columbus.

1909 California declared October 12 a legal holiday, to be known as "Discovery Day."

1910 President Taft declared October 12 to be a legal U.S. holiday.

1915 The San Francisco Columbus Day Committee was organized by the Salesian Fathers of St. Peter and Paul's Church in the heart of North Beach.

Friend Us On Facebook.com
http://www.facebook.com/groups/unitednativeamericansinc

WE INVITE MEMBERS OF THE PRESS AND COMMUNITY TO JOIN US FOR OUR INDIGENOUS RIGHTS RALLY & FORUM
All Dancers and Drum Groups Are Welcomed!


Anti-columbus day Gathering (Ohlone Territory) SF
Public · By Wicahpiluta https://www.facebook.com/events/221958087964435/
Monday.9:30am.
Let them know columbus is not welcome here in Ohlone Territory. Bring Anti columbus signs banners and anything else to express your disgust with columbus. Starting @ washington Square Park and walking up to coit Tower to columbus statue. Ohlone Opening Prayer (Corrina Gould) Chochenyo/Karkin California Songs SSP&RIT Drum Danza Mexica Plus More...... A.I.M., Idle No More, NYM, and other Indigenous Movement Banners Welcome. Please Out of respect for the Ohlone Peoples who are continuing to battle for federal recognition no US Flags. ............................Get off Montgomery Bart Station. Go to Market/Kearney catch 8x, 30, or 45 bus to washington Square Park. Parking is a 5 minute walk away from ws park on the opposite side of coit Tower located @ Kearney/Bay St.