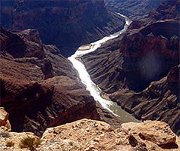 URGENT PROTEST: Bodaway/Ga​p Special Meeting Oct. 3, 2012 12:00 Re: CONFLUENCE PROJECT
By Don Yellowman
Posted at Censored News
http://www.bsnorrell.blogspot.com
Yah ah teh Everyone,
I pray that all are doing well. Some of you may not know, but I am a voting member of the Bodaway Gap Chapter and former Grazing Officer and Farm Board member of the area. Therefore, my family and I are stakeholders and have an interest in the effort being pushed upon the people to buy-in to the Escalade Project.
As mentioned below, there are many unethical and illegal practices and processes being employed including making false statements (lies) to coerce and deceive the people in order to obtain their buy-in.
I attended the CLUP meeting on Sunday and observed the people asking critical questions about the Conflict of Interest issue regarding our elected and appointed officials who are advocating for the development. As a result, we motioned that all decisions and votes be tabled until a legal opinion could be rendered by an outside lawyer/law firm. It was voted and approved.
I also asked Billy Arizona about the process for setting up another Special Meeting and he did not mention that that was their intention.
So, please know that they have scheduled another Special meeting in the middle of the week tomorrow to again force their resolution to rescind the first resolution which opposed the Escalade project.
Now we're being told that their will be a police force from Window Rock there to enforce peace, or enforce their will on the people as I see it to intimidate the people like they tried to do for the Water Forums.
I am on my way to R & D Meeting to speak to these issues and concerns, and to seek their support to have a mediator facilitate the meeting between the people and the partners.
WE ARE ASKING FOR YOUR SUPPORT TO BE AT THE BODAWAY GAP CHAPTER TOMORROW AT 12:00 TO PROTEST THIS MEETING AND HELP US STOP THEM FROM MOVING FORWARD WITH THEIR AGENDA TO SILENCE US AND FORCE THEIR WILL.
We are an impacted region from the Bennett Freeze, and now it makes sense as to why the Freeze was lifted. They want the land no matter what the cost!!!! AGAIN IT'S PROFIT OVER PEOPLE.
FYI...I will also be at the Water Task Force meeting supporting our grassroots brothers and sisters. The fight is not over...we need to protect our sovereignty from outside interests.
Please pass along this message to everyone you know. Please help us defeat tyranny.