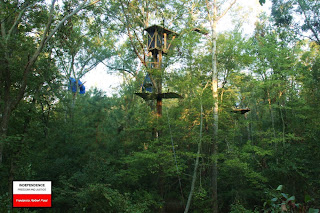 WINNSBORO, TEXAS – THURSDAY, OCTOBER 11, 2012 – Two journalists working for the New York Times were handcuffed, detained and then turned away from private property by local law enforcement employed as private security guards for multinational pipeline corporation TransCanada. The journalists reporting on the first tree blockade in Texas history, now in its third week of sustained resistance to the Keystone XL tar sands pipeline, were grabbed by police, physically restrained, and prevented from approaching the blockade site or making contact with protesters. These repressive actions took place on private property, indicating that TransCanada is employing a private police force to actively patrol beyond the boundaries of the Keystone XL easement without landowner permission.
A Times spokesperson released a statement saying, “While reporting a story on how protestors in East Texas are trying to stop the Keystone XL pipeline from being built, [a Times reporter] and a Times photographer were detained yesterday by local police and a TransCanada security guard; they were told for trespassing. They identified themselves as media and were released but told they needed to leave the private property where they had positioned themselves (with the permission of the landowner). They complied.”
Minutes after the first two journalists were handcuffed, police barred another group of journalists from approaching even within sixty feet of the Keystone XL easement, an arbitrary designation with no legal precedent.
Yesterday’s events came only one day after the arrests of another two journalists, Lorenzo Serna and Elizabeth Arce, who one week ago had climbed to the top of the blockade’s timber scaffolding to interview several courageous protesters. Although the two journalists were allowed to climb the wall without harassment, police waiting on the ground threatened Serna and Arce with arrest as soon as they attempted to climb back down. Despite clearly displayed press credentials, the two were arrested upon descent ultimately to have their charges dropped only after spending a night in Wood County jail.
These events mark the latest in a series in which journalists and the Constitutional ideal of a free press suffer the same disrespect and abuse that TransCanada has shown to families along the Keystone XL pipeline route for years. Reports have included open threats of arrest on private property, the confiscation of cameras and video equipment, and arrests of by-standers on public right of ways. All the while, questions linger regarding the legality of policing the Keystone XL pipeline easement in this way.
Arthur Judge, a Wood County deputy sheriff, admitted to Texas landowner Susan Scott that TransCanada was paying the police by the hour to work private security details. “He was patrolling the easement on my farm and he informed me that his mandate was to arrest anyone at anytime that sets foot on the easement,” attests Ms. Scott. “The officer also demanded that I show ID or he would arrest me, all this while I was standing on my own private property in the middle of the woods. TransCanada is ordering police to arrest me just for trying to take a walk across my own farm.”
Tar Sands Blockade is a coalition of Texas and Oklahoma landowners and climate justice organizers using peaceful and sustained civil disobedience to stop the construction of TransCanada’s Keystone XL tar sands pipeline.
“What TransCanada is doing is illegal,” contends Tar Sands Blockade spokesperson Ron Seifert. “TransCanada does not own the property; they have no rights over the property other than permission to install a pipeline. So long as a landowner is not interfering with their ability to use the land for the purpose of installing and maintaining a pipeline, that landowner still has the ability to do whatever they want on the land. TransCanada is paying the police to violate civil liberties and constitutionally protected land rights.”
Posted by Censored News, publisher Brenda Norrell at October 11, 2012