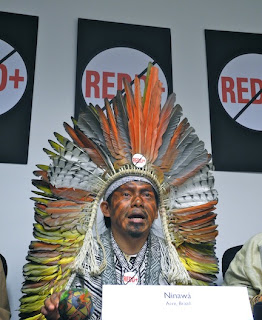 Global Alliance of Indigenous Peoples
Censored News
http://www.bsnorrell.blogspot.com
As California lawmakers prepare to launch the state’s cap and trade program as part of its Global Warming Solutions Act, or AB32, indigenous leaders traveled to Sacramento to urge officials not to include an international forest-based carbon offset mechanism, known as REDD, in the law.

REDD, which stands for Reducing Emissions from Deforestation and forest Degradation, is a controversial market-based policy mechanism that proposes to protect tropical forests in order to capture and store carbon dioxide pollution. But REDD-type projects have led to serious human rights violations, and many indigenous leaders have denounced REDD projects as a false solution to climate change, the delegation charged.

Members of the Global Alliance of Indigenous Peoples and Local Communities on Climate Change against REDD and for Life traveled from Mexico, Brazil and Ecuador to Sacramento last week to testify before the California Air Resources Board and meet with officials from Governor Jerry Brown’s office and the state Environmental Protection Agency. Alliance members have experienced persecution and threats for speaking out against these programs, the group’s spokespeople said.

According to Tom Goldtooth, executive director of the Indigenous Environmental Network, “REDD is a perverse forest offset scam that allows polluters like Chevron to keep destroying the environment. The United Nations recognizes that REDD may result in ‘the lock-up of forests,’ the majority of which are on Indigenous Peoples’ land. REDD is potentially genocidal.”

In 2010, California signed agreements with Chiapas, Mexico; Acre, Brazil, and other states that may bring REDD into AB32, linking California’s climate policy to these tropical regions. The visitors to Sacramento told lawmakers that they are suffering harassment, intimidation and vandalism of their homes and offices for rejecting REDD-type projects.

José Carmelio Alberto Nunes (Ninawá), president of the Federation of the Huni Kui people of Acre, Brazil, says he and his wife have received anonymous phone calls warning them, “be careful what you say and who you talk to, or you may have an accident."

“I think my coming to California threatens those interests that hope to make money from REDD,” the Huni Kui leader said. “Anyone who speaks out against REDD in Acre is persecuted.”

As the policy moves forward, Ninawá says he is not afraid to speak out. “If I am assassinated for resisting REDD and defending my land, other Ninawás will continue the struggle.”

Despite voluntary safeguards, REDD-type projects are already resulting in deaths, violent evictions, forced relocation, imprisonment, armed guards and prohibitions to access and use land essential for the survival of Indigenous Peoples and forest-dependent communities.

Rosario Aguilar, a health promoter from Chiapas, Mexico, and a member of the delegation to California, said, “Even before California has established its market, the REDD-type project being implemented in our communities is causing conflict and displacement. As part of their plan to move indigenous people off the land, the government cut off medical services to the village of Amador Hernández in the Lacandon Jungle. This is why we say that REDD is promoting death, not life.”

The State of Chiapas itself notes in its Climate Change Action Program that 172 communities have already been “relocated” as part of its avoided deforestation efforts, another name for REDD.

“Given California’s REDD agreements, we hold the State of California and Governor Jerry Brown responsible for the moral and physical safety of those who speak out against REDD,” said Goldtooth.

Michelle Chan, director of economic policy for Friends of the Earth, reported that in the delegation’s meeting with Cliff Rechtschaffen, Brown’s senior advisor on climate change, “Friends of the Earth specifically requested that if any of the participants, as a result of meeting with the governor’s office, experience increased harassment or threats upon returning home, that the governor do whatever he can to help remedy the situation.”

Rechtschaffen replied that the governor’s office would endeavor to do whatever would be appropriate.

The California Air Resources Board is expected to decide in 2013 on whether or not to continue pursuing REDD credits as part of California’s cap and trade program.

Marlon Santi, a K’ichwa leader from the Sarayaku community in Ecuador, renowned for resisting oil development and speaking out against REDD, said that Indigenous Peoples are not just holding the Governor’s office responsible. “We are taking our case to the United Nations. We must stop REDD from threatening the survival of our peoples.”
Contact:Tom Goldtooth, Indigenous Environmental Network, 218-760-0442
Jeff Conant, Friends of the Earth, 575-770-2829
at October 25, 2012