Media Releases | | October 02, 2012
(Ottawa) – A judge today dismissed all charges against thirteen Canadians on trial for protesting the reckless climate change and energy policies of the Harper Government. The judge threw out the case after the Crown presented insufficient evidence that the peaceful demonstration constituted a crime.

The 13 defendants were arrested on 26 September, 2011, during a demonstration on Parliament Hill in which roughly 200 people risked arrest to protest the climate change and energy policies of the Harper government. They were charged with engaging in a prohibited activity contrary to the Trespass to Property Act and also issued a trespass notice that banned them from attending Parliament Hill for a period of one year.

“Throwing this case out of court puts the spotlight back on the real climate criminal: the Harper Government,” said Graham Saul, one of the thirteen who was arrested. “The Harper government’s reckless climate change and energy policy is dividing Canadians. None of us want to be arrested, handcuffed or detained, but I felt compelled to stand up against policies that are fueling, instead of fighting, climate change.”
- 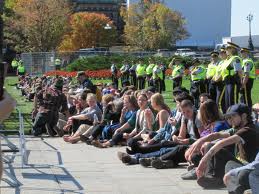 The trial ends three weeks before thousands of people are scheduled to gather in an act of peaceful civil disobedience in Victoria, B.C. (see DefendOurCoast.ca)

Below are some initial reactions from some of the defendants:

“It’s appropriate that this case was thrown out of court on Gandhi’s birthday. It is a vindication of our right and our responsibility to nonviolently challenge the Harper government’s reckless and unethical climate change policies.”
- Liz Bernstein

"I do not regret participating in the pipeline protest last fall. It is our duty as citizens to fight against unjust government policy and stand up for our right to free expression - especially on Parliament Hill."
- Dan Snyder, 23, McGill law student

“I am more committed than ever to taken a stand against the Canadian government’s destructive environmental and energy policies; it is an international disgrace that our Prime Minister, Stephen Harper, has gotten into bed with the Big Oil companies. The Conservative government is serving the business interests of the oil companies, but the public interest (the health of our children, future generations, and the planet’s life support systems) is being ignored and damaged.”
- Trevor Hache

“I feel vindicated that trespassing charges resulting from our principled peaceful action against the Harper government tar sands and pipeline support were dismissed by the court.”
- Jo Wood