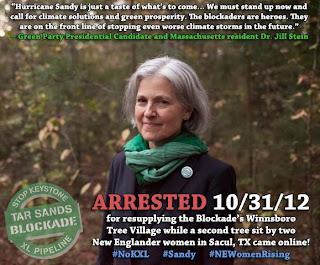 
***UPDATE 10:30AM – In Winnsboro, Dr. Jill Stein has been arrested, taken to Wood County Jail, and is awaiting processing. The freelance reporter has been released from detainment without arrest or charge.
A statement from Dr. Jill Stein:

“I’m here to connect the dots between super storm Sandy and the record heat, drought, and fire we’ve seen this year – and this Tar Sands pipeline, which will make all of these problems much worse. And I’m here to connect the dots between climate devastation and pipeline politicians – both Obama and Romney – who are competing, as we saw in the debates, for the role of Puppet In Chief for the fossil fuel industry. Both deserve that title. Obama’s record of “drill baby drill” has gone beyond the harm done by George Bush. Mitt Romney promises more of the same.”

New Englander Women are rising up in response to the devastation their communities have faced due to Hurricane Sandy today to oppose KXL and connect the dots between climate change and the extreme weather being experienced regularly across the globe!

Read more about Dr. Stein, Lauren, and Pika - lifelong residents of New Hampshire and Vermont respectively - on our LiveBlog here: http://tarsandsblockade.org/11th-action/
at October 31, 2012