'She Speaks' Indigenous Women Speak Out Against Tarsands 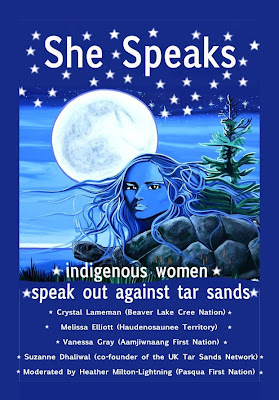 AAMJIWNAANG: October 4, 2012, 6:30pm
1972 Virgil Avenue: Maawn Doosh Gumig Community and Youth Centre
https://www.facebook.com/events/272017639583474/
BRANTFORD: October 5, 2012, 6:30pm
50 Market Street: Odeon Building Room 205
https://www.facebook.com/events/442134359161453/
Indigenous communities are taking the lead to stop the largest industrial project on Earth and Northern Alberta is ground zero with over 20 corporations operating in the tar sands sacrifice zone, with expanded developments being planned. The cultural heritage, land, ecosystems and health of Indigenous communities including those in the Athabasca, Peace River and Cold Lake regions of Alberta are being sacrificed for oil money in what has been termed a “slow industrial genocide”. Infrastructure projects linked to the tar sands expansion such as the Enbridge Northern Gateway pipeline, Kinder Morgan pipeline, Enbridge Line 9 reversal, and the Keystone XL pipeline threaten Indigenous communities across Turtle Island particularly Aamjiwnaang First Nation and the Haudenausaunee Confederacy here in Southern Ontario.

To build ties of solidarity and resistance, and to create a broad base on informed support, a speakers’ series is being organized in Coast Salish Territories (Vancouver) and in Ontario.

CRYSTAL LAMEMAN is a Beaver Lake Cree First Nation activist and the Peace River tar sands campaigner for the Indigenous Environmental Network in Alberta. Crystal is committed to restoring Native treaty rights and stopping the exploitation of the tar sands.

MELISSA ELLIOTT is co-founder of Young Onkwehonwe United, and a youth activist from the Haudenosaunee Territory of Six Nations. Known to most as Missy, she has organized to defend Kanonhstaton (the former Douglas Creek Estates), and to stop development projects on Six Nations territory being pushed through without their consent such as the Line 9 reversal project.

VANESSA GRAY is a youth organizer from Aamjiwnaang First Nation, a community that has been named the most polluted place in North America by the National Geographic Society. She founded Green Teens, a environmental justice organization of Native youth to resist the impact of the 63 petrochemical refineries in her hometown and is an active campaigner for the rights of Indigenous people across these lands.

SUZANNE DHALIWAL is the co-founder of the UK Tar Sands Network, which works in solidarity with the Indigenous Environmental network to campaign against UK corporations and financial institutions invested in the Alberta Tar Sands.

Moderated by Heather Milton-Lightning from the Pasqua First Nation, Ruckus Society and the Indigenous Environmental Network.

This event is organized by the Indigenous Environmental Network. IEN is an alliance of grassroots Indigenous Peoples whose mission is to protect the sacredness of Mother Earth from contamination and exploitation by strengthening, maintaining, and respecting traditional teachings and natural laws.