BREAKING: Over 50 Enter Tree Blockade in Defiance of Police Repression to Defend Tree-Sitters

UPDATE 3:50 PM - Two blockaders who locked themselves to Keystone XL machinery have been arrested. A crowd of supporters stood by and cheered for as they were taken into police custody to the cheers. These two most recent arrests make 10 total for the day.
Demonstrate your support for our brave blockaders with a generous donation to their bail fund.
UPDATE 3:45PM- In case you missed it, Tar Sands Blockade was on Democracy Now! this morning. Our spokesperson Ron Seifert was joined by landowner Susan Scott and actress Daryl Hannah to discuss the blockade, TransCanada’s bullying and the SLAPP lawsuit against 21 people associated with stopping tar sands. 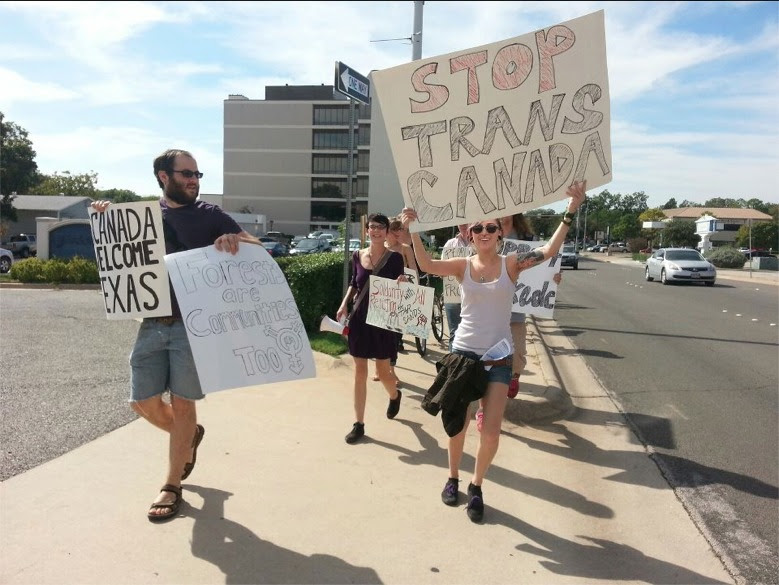 UPDATE 1:55PM – At least eight people have been arrested after walking onto the Keystone XL clear cut in defiance of recent repression. Two blockaders are still locked to huge excavator in the path of toxic pipeline.

UPDATE 1:55PM – At least eight people have been arrested after walking onto the Keystone XL clear cut in defiance of recent repression. Two blockaders are still locked to huge excavator in the path of toxic pipeline. 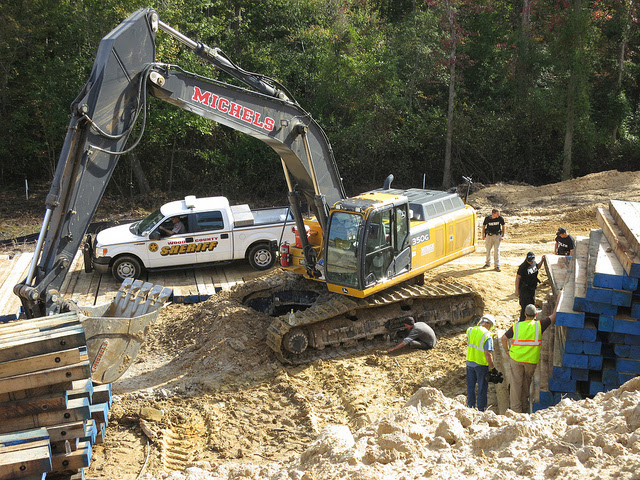 UPDATE 12:50PM-We have now confirmed that a 70-year-old woman participating in the blockade was thrown to the ground and tackled by TransCanada’s hired thugs. Video will be coming soon.

UPDATE: 12:00PM- We just did a call-in with the solidarity rally in DC! “We are not deterred by the legal and police repression we are facing. We will continue and we hope you will help in this fight against the Keystone XL.”
UPDATE 11:35AM- Picture from the DC solidarity rally. Over a hundred people turned out over their lunch hour to stand with the Texas blockade and stop Keystone XL. 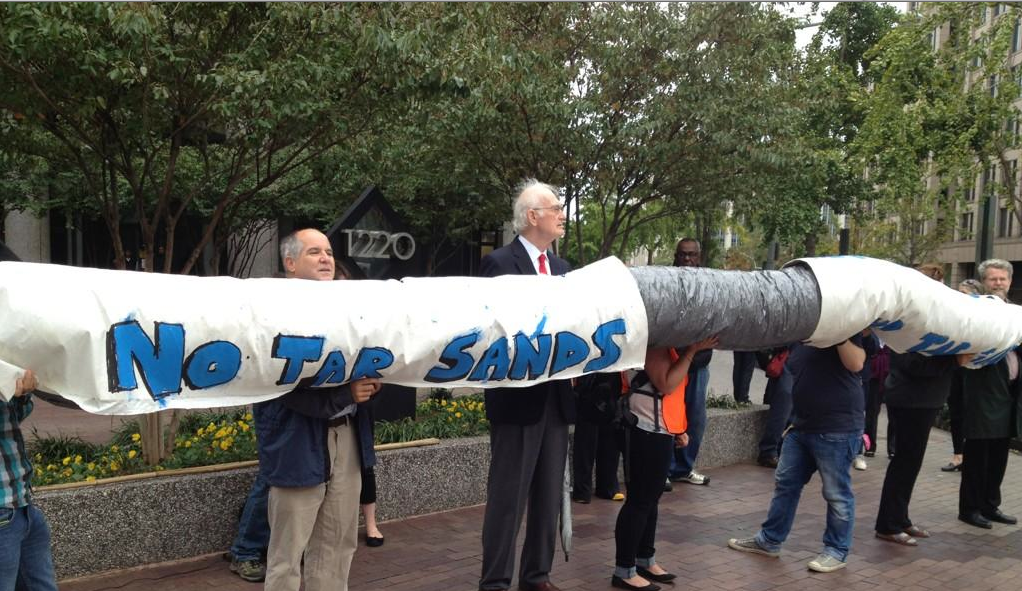 UPDATE 11:10AM- 6 blockaders have been arrested at the Tree Blockade.
UPDATE 11:00AM- Today’s first solidarity rally in Washington DC is beginning now outside the American Petroleum Institute!
UPDATE 10:00AM- 4 arrests so far. Freelance journalist/livestreamer Lorenzo Serna has been released. The rally at the easement near the highway is going strong with chanting, singing and lots of colorful banners. TransCanada is barking orders at the police. We should have video and pictures soon.
UPDATE 9:50AM- TransCanada supervisors in an ATV shouting orders to their paid police force.
UPDATE 9:45AM- Small group of ground blockaders break through police line and enter tree blockade! 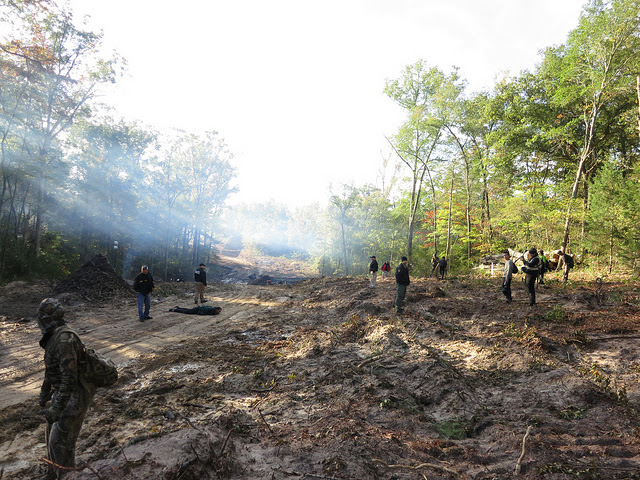 UPDATE 9:20AM- Livestreamer @uneditedcamera (Lorenzo) has been detained and handcuffed, but they’re STILL STREAMING! Police are trying to flank groups of protestors.

UPDATE 9:50AM- TransCanada supervisors in an ATV shouting orders to their paid police force.
UPDATE 9:45AM- Small group of ground blockaders break through police line and enter tree blockade!
UPDATE 9:20AM- Livestreamer @uneditedcamera (Lorenzo) has been detained and handcuffed, but they’re STILL STREAMING! Police are trying to flank groups of protestors.
Watch the Stream Live NOW!


UPDATE 9:06AM- Three blockaders have been arrested. We outnumber TransCanada’s police 3 to 1. Two blockaders have locked down to excavator equipment protecting the tree-sit. 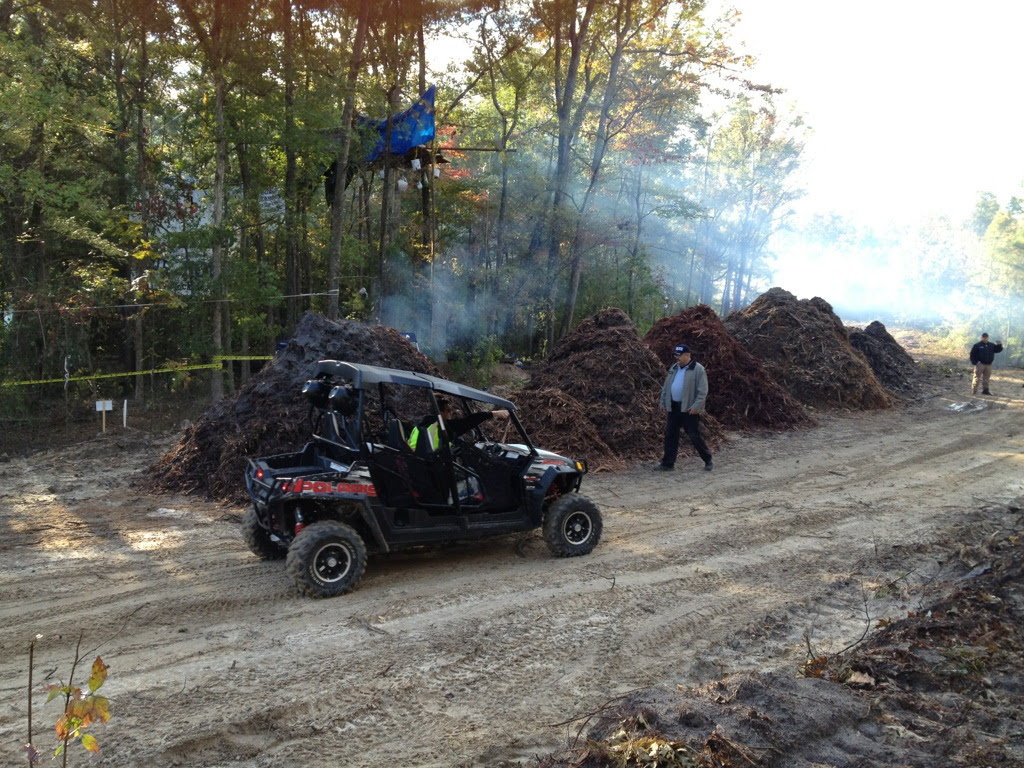 UPDATE 9:00AM - One Blockader arrested after sitting down in the middle of TransCanada’s easement. 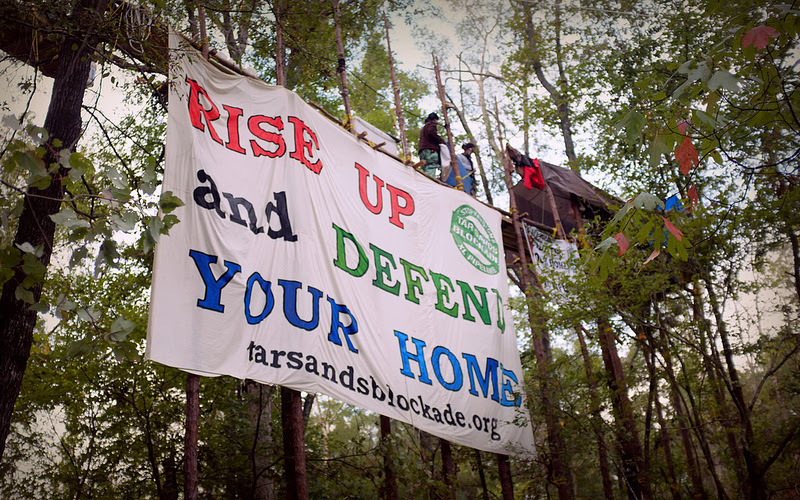 WINNSBORO, TEXAS – MONDAY, OCTOBER 15, 2012 8:30AM – Following a weekend of nonviolent civil disobedience training in North Texas by Tar Sands Blockade, dozens of protesters and supporters are rallying today at the site of the largest and longest tree sit in Texas history to stage the largest walk-on site protest and civil disobedience in the history of Keystone XL pipeline construction. Several individuals are defending the tree sitters and the trees by locking themselves to construction equipment being used in proximity to the forest blockade. Solidarity actions are also taking place in Washington DC, Boston, Austin and New York City.
Altogether more than 50 blockaders are risking arrest to stop Keystone XL construction and bring attention to TransCanada’s repression of journalists attempting to cover the blockaders’ side of the story. They are joined by dozens of supporters who are rallying on public property with colorful banners and signs alongside the easement’s closest highway crossing. A massive media team is in tow to document the day of action and any possible police repression.
As the Winnsboro tree blockade enters its fourth week, the blockaders are resupplying their friends in the trees with fresh food, water, and cameras to further document their protest despite the threat of a newly-expanded Strategic Lawsuit Against Public Participation (SLAPP) by TransCanada and egregious criminal overcharges by local law enforcement. Due to the SLAPP suits’ outrageous claims, the tree sitters have by-and-large felt too threatened to safely reveal their identities, despite their protest being nonviolent. That the defiant walk-on protest is the largest yet attempted in the history of protests surrounding Keystone XL construction sends a clear signal that the blockaders will not be deterred by SLAPP suits and other legal threats to limit their civil liberties.
“Three weeks is a long time to be sitting in a tree. The training I got this weekend has me ready to rise up and join the sitters in defending Texas homes from the toxic tar sands,” shared Glenn Hobbit, 28. “They’re saying we might get sued or worse, but stopping this pipeline is too important.”
Last week, the multinational corporation opened a civil suit in which it named 19 individual defendants, 3 organizations, and 6 anonymous tree sitters for a total of 28 defendants seeking an injunction, declaratory relief, and damages. All the named defendants are former arrestees of Tar Sands Blockade actions with the exception of media spokesperson Ron Seifert, who has yet been arrested in connection with a protest, and area landowner Eleanor Fairchild, who acted independently with activist and actor Daryl Hannah. Hannah was not named in the suit.
Tar Sands Blockade is a coalition of Texas and Oklahoma landowners and climate justice organizers using peaceful and sustained civil disobedience to stop the construction of TransCanada’s Keystone XL tar sands pipeline.
“In reality, Tar Sands Blockade is not trespassing on TransCanada’s property. Many of TransCanada’s easement contracts were brokered through fraud and intimidation, and their entire legal foundation is being challenged in the courts for those reasons,” explained Ron Seifert, Tar Sands Blockade spokesperson. “If anything TransCanada is trespassing on the property of landowners who never wanted anything to do with their dangerous tar sands pipeline.”