Actress and activist Daryl Hannah was arrested today alongside East Texas farmer, Eleanor Fairchild while defending her farm from Keystone XL’s destruction.
Daryl’s involvement in Fairchild Farms story brought a lot of attention when the duo peacefully stood in front of TransCanada’s heavy machinery, which was burning piles of once-majestic trees from Eleanor’s beloved farm and delicate wetlands. Eleanor is a feisty 78-year-old great-grandmother who was arrested for “trespassing” on her own land after being inspired by Tar Sands Blockade. 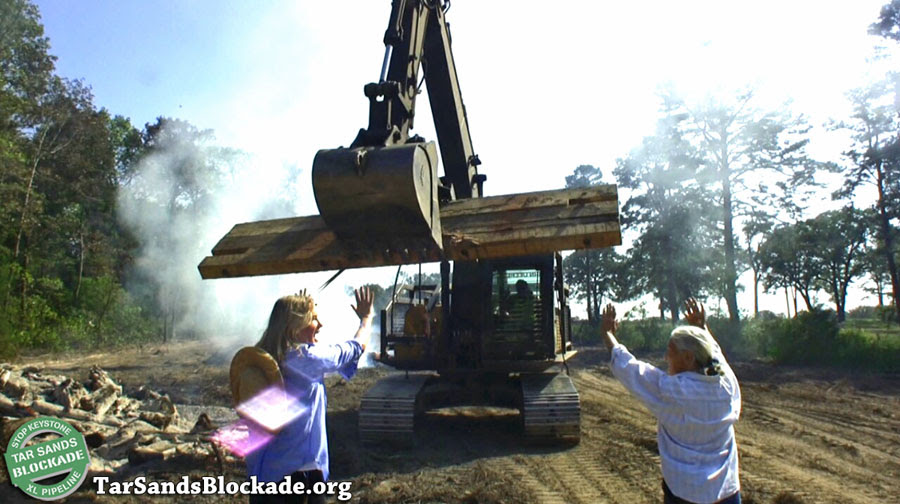 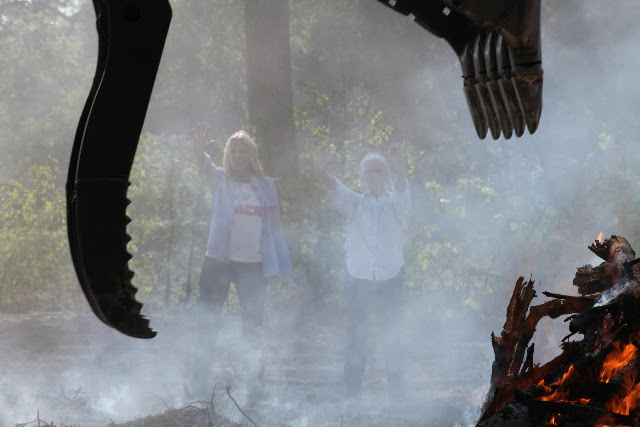 UPDATE 4:30PM - TransCanada has arrested Eleanor for “trespassing” on her own land. 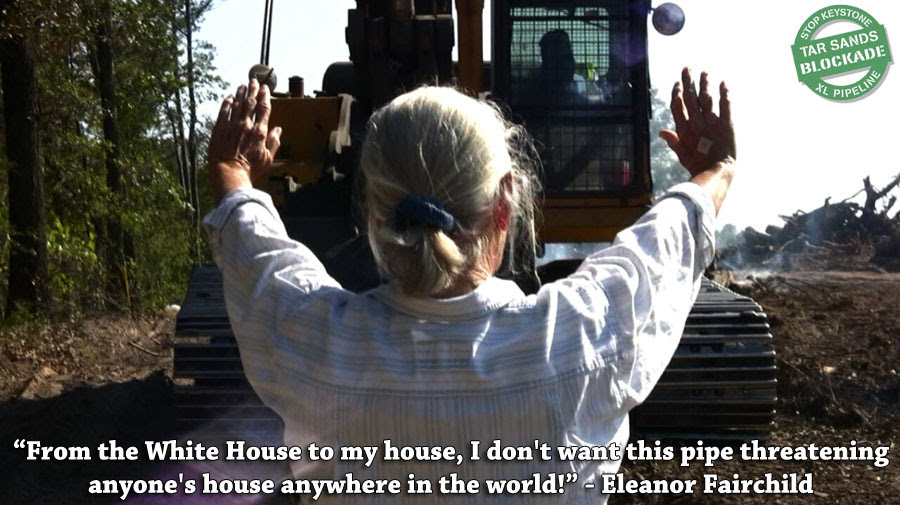 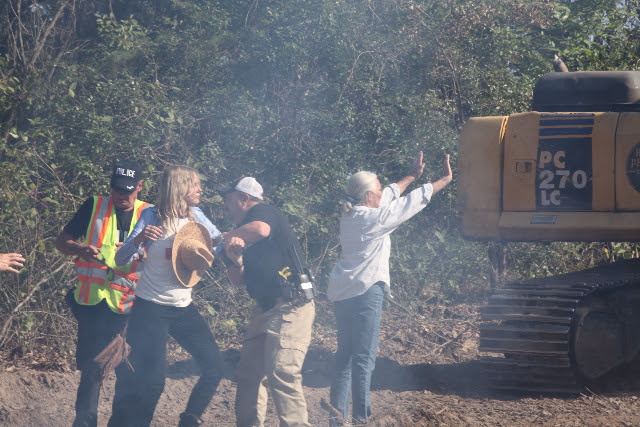 UPDATE 3:35PM – Police officer trying to push Daryl and Eleanor out of the way! Yes, we got it on video. 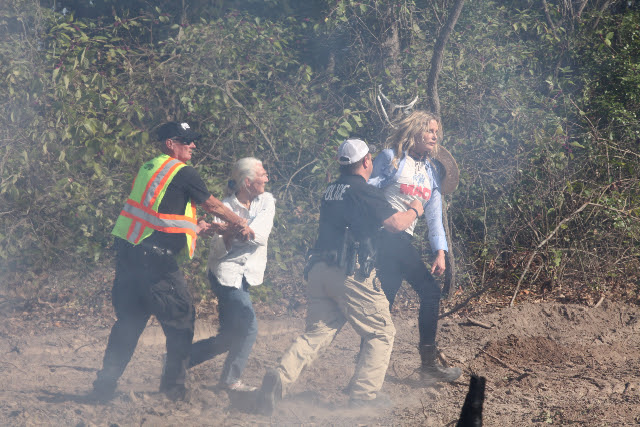 UPDATE 3:30PM – Eleanor and Daryl defiantly step out in front of an excavator, a large piece of heavy machinery, to keep it from tearing up Eleanor’s land. TransCanada’s machinery operator refuses to turn off engine despite peaceful protestors a few feet in front of them. 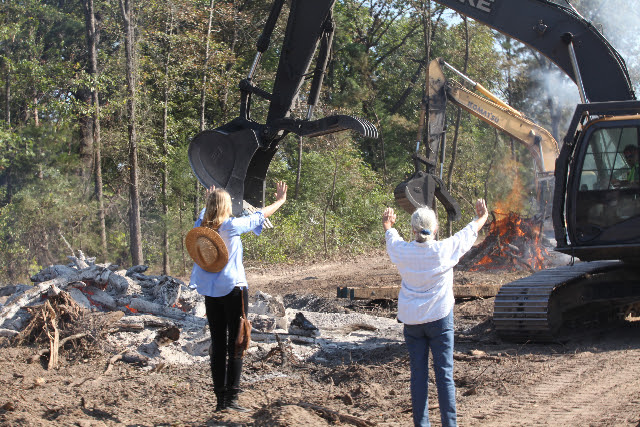 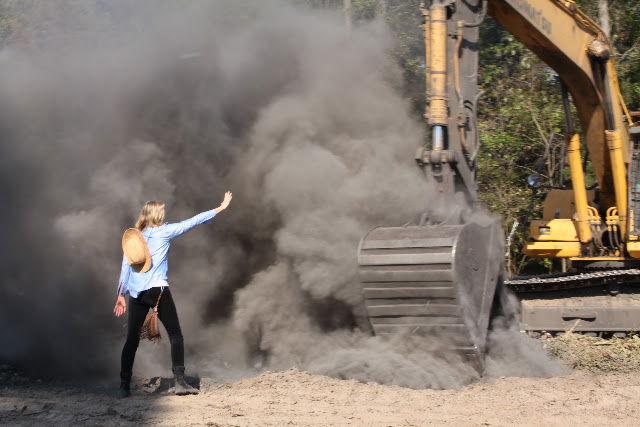 UPDATE 3:15PM – Eleanor and Daryl march from Eleanor’s home down to the Keystone XL path of destruction that cuts through her 300 acre beloved farm and wetlands. 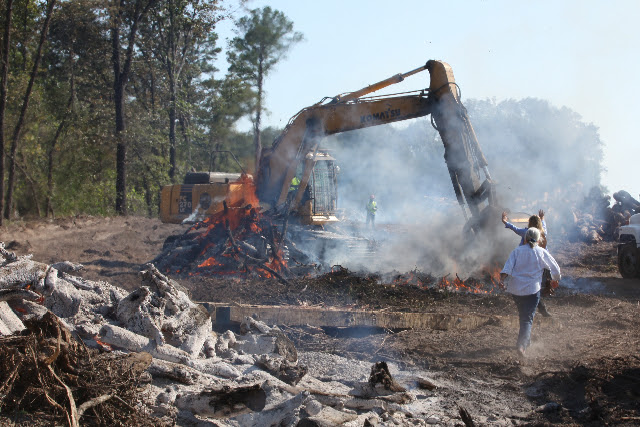 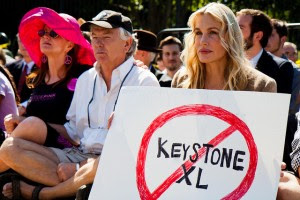 Daryl Hannah Risking Arrest Protesting Keystone XL at the White House. Photo Credit: Ben Powless
How can you be arrested for “trespassing” on your own land? Well, anything can happen when a multinational corporation comes in and expropriates your farm for their profit.
That’s why actress and activist Daryl Hannah has joined forces with East Texas ranch owner Eleanor Fairchild, 78, to stage a protest against Keystone XL construction on Mrs. Fairchild’s farm. The actress is intent on defending Mrs. Fairchild’s home and business, Fairchild Farms, a portion of which has been expropriated by TransCanada, for its toxic tar sands pipeline. The duo claim their action is inspired by our ongoing tree blockade happening on a neighboring property.
On Thursday afternoon, Hannah marched across Fairchild Farms with the ranch owner to block bulldozers from continuing to clear large swaths of Mrs. Fairchild’s land along the toxic tar sands pipeline’s route. Keystone XL will permanently bisect Mrs. Fairchild’s 300 acre ranch, which includes undeveloped wetland areas and natural springs producing over 400 gallons of fresh water per minute from her property. Hannah, whose outspoken anti-Tar Sands position dates back many years, expressed pride to be able to stand with Mrs. Fairchild who is watching her home and its delicate ecosystems be destroyed in front of her eyes. 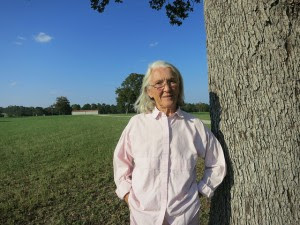 Eleanor Fairchild, East Texas Farmer & Great-Grandmother
“I am standing in solidarity with the farmers, ranchers, and landowners who have been bullied, coerced, and threatened by TransCanada. Texans do not want this toxic export pipeline coming through and compromising their land and water,” she shared. “Texas has already experienced a tragic and epic drought. We cannot afford to compromise our water supply for a multinational corporation’s profits.”
Mrs. Fairchild, a great-grandmother, has been staunchly opposed to TransCanada’s Keystone XL tar sands pipeline project since she was first informed that it was to cross her land many years ago. She never signed a contract with the Canadian pipeline company, who, in turn, proceeded to expropriate her ranch through Texas’ lax eminent domain legal proceedings. Violated by TransCanada, all but abandoned by elected officials, and legally unrepresented, Mrs. Fairchild took action by other means during last year’s Tar Sands Action protests at the White House, which resulted in 1253 arrests during the two week long civil disobedience.
Unwilling to take further action since then, she found herself inspired yet again due to the bravery exhibited on a neighboring property by the tree blockade. Mrs. Fairchild explains, “We’re all neighbors here and everyone knows everyone’s business, really, so I knew the group was up to something at the tree blockade, but hearing about the young girl, Maggie, on the 40-foot tall pole all alone the other day, I knew I had to do something myself. I can’t climb a pole like her, but if I can raise hell by sitting down, I’m going to! What this foreign corporation’s doing just isn’t right.”

“I couldn’t be prouder to take a stand with my new inspiration, Eleanor,” Hannah said. “We’re rising up to defend homes here and now, because if a multinational corporation like TransCanada can come in and steal private property from Texans, then they’ll do it to anyone.”
TransCanada is currently embroiled in several lawsuits from landowners challenging the legality of their use of eminent domain to take land for the tar sands pipeline project. Property owners who initially signed contracts but who have since come to unequivocally oppose the fraudulent nature of the dangerous project have been silenced through ruthless legal threats. Fairchild, however, is undeterred.
“Tar sands is the dirtiest fuel on the planet, and I want the world to know that Texans do not want this pipeline forced through their homes.” She continued, “From the White House to my house, I don’t want this pipe threatening anyone’s house anywhere in the world!”
Come learn how to take a stand against Keystone XL with East Texas landowners at our Direct Action Training Camp, October 12-14th and a public action on the Monday the 15th.
The photo below is just the beginning of the destruction on Eleanor’s land. See more photos in our flickr set. 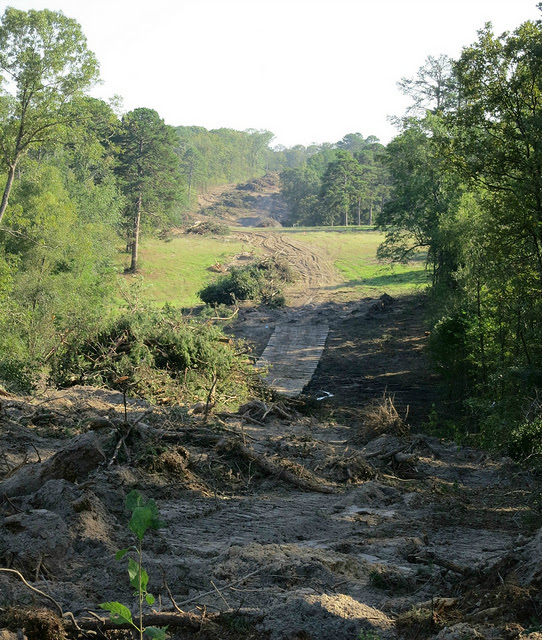