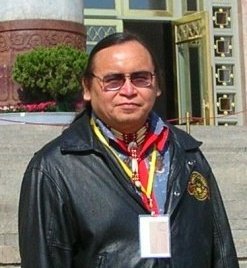 Upon return from Iran, Terrance Nelson says Harper is the new Crusader

"I will be the target but the Chiefs must get stronger if they want real change," former Chief of Roseau River Ojibwe Terrance Nelson.


Chief Fox,
The meetings you will have with Chiefs will be significant.The anger of the people is real. Cuts and the lack of any real progress on our right to a share of our own resource wealth is something that must be addressed.

What I ask Canadians is how many Iranians are you prepared to kill. Are you prepared to kill 100,000, 300,000, 500,000, a million, three million or ten million. How much blood are ýou willing to have on your hands. The West is ready to kill like the Crusaders. When seven of us indigenous people went to Iraq in 1998, we took 25 hours of video, broadcast quality. Trouble was, no one in the west cared. It was prior to 9-11 and we had not yet gone into the second war against Iraq.

We failed in Iraq. We were never able to convince people that the Iraqi were human beings or that the Iraqi children felt the same pain as our own children. If we fail in Iran, there will be war. Harper is
the new Crusader. He believes in nothing but his own values and like the Americans during the Vietnam war, he believes in his right to impose Crusader values on the Iranians.

How we can believe that we have the right to go to some other peoples country. Canadians impose their belief by killing other people.It is simply Crusader mentality. Shutting Embassies and closing down dialogue and diplomacy is the road to war. The Christians today are the same as the Crusaders, they are right and no one can tell them any different. There is no room for debate, no room for questioning the right of the Crusader.

Trouble is that the Crusader will lose again and this time, it will affect every Canadian and American as this new war will collapse the United States economy. I will be the target but the Chiefs must get
stronger if they want real change. Tell them not to settle for trinkets or else they condemn their people to more of the same for decades to come.
at October 20, 2012 No comments:

The most censored in Indian country: Drones, spy towers and the militarization of Indian lands
By Brenda Norrell
Censored News copyright
http://www.bsnorrell.blogspot.com


Among the most secret issues are spy towers and drones. Currently, Tohono O’odham are reporting drones in the skies, but very little is known about these drones.


Censored News continue extensive research into the secrecy and militarization at the border.
Researching Tohono O’odham and drones, the first surprise is to see that the elected Tohono O’odham government scheduled a special session of the legislative council for a tour of the drones at Libby Army Airfield at Sierra Vista, Ariz., on Jan. 31, 2011. The purpose was a tour of Customs and Border Protection’s unmanned aircraft systems, also known as UAVs or drones.


Sierra Vista is where the Army Intelligence Center at Fort Huachuca is located, and the site of protests over its role in torture at Abu Ghraib and production of the torture manual of the School of Americas. The manual was made public in 1996, after decades of torture and assassinations by US trained military in Central and South America.


Already in the past month, two secret plans have been exposed by Censored News involving the Border Patrol on Tohono O'odham land.


Censored News also exposed the fact that the Border Patrol is planning a massive new complex on Tohono O’odham land, in Pisinemo District, with housing for 32 agents, helicopter launch pad, horses and dogs. Further, more O’odham land would be seized for a transmission corridor to the north. The plan was kept secret from the public until the draft environmental impact statement was discovered the same day that public comments closed in September.


When it comes to drones, few subjects are wrapped in so much secrecy.


Testimony before Congress revealed that the Border Patrol operates the Predator B drones fly, primarily at night, and patrols the US/Mexico border. This includes the stretch between Yuma and Nogales, Ariz. The Tohono O’odham Nation is located between the two cities, on their traditional O’odham homeland.


One of the few public statements about the use of drones on Tohono O’odham land is a disturbing one.


The three year project included the university’s Dr. Hermann F. Fasel, professor at the UA Department of Aerospace and Mechanical Engineering. Dr. Fasel headed the drone componenet of the project and the creation of a drone with a seven foot wingspan, supposedly for monitoring Tohono O’odham rangelands. The rangeland project also encouraged Tohono O'odham students to work for companies like Raytheon Missiles.


Equally disturbing is the fact that Dr. Fasel doesn’t just work for the university. Dr. Fasel is a military contractor who works with the US Air Force and private corporations, including Boeing.


In Tucson, at Davis Monthan Air Force base, soldiers operate the remote control killer drones that have been responsible for targeted assassinations and the killing of civilians in other countries. Meanwhile, Boeing received the contract for construction of the border wall in Arizona and the previous flopped spy towers. On Tohono O'odham land, Boeing was responsible for digging up the remains of O’odham on their land for the border vehicle barrier.


As for the drone maker, the rangeland project states Dr. Fasel is recognized for his pioneering research in Computational Aerodynamics and Fluid Dynamics.


“His research has been and is currently funded by Federal government agencies and private corporations.  Examples of these funding agencies include: the Department of Defense, the Air Force Office of Scientific Research, NASA, Army Research Office, Office of Naval Research, Daimler Chrysler and the Boeing Company. Directly related to the proposed effort is his past development and flight testing of a UAV for the United States Air Force and this current participation in the development and flight testing of a long endurance UAV (also for the Air Force; in subcontract to The Boeing Company).  His UAV expertise will be crucial for developing and operating an UAV based system for on-demand aerial imaging for range land management,” the rangeland project states.


As previously reported by Censored News, the drone maker Advanced Ceramics entered into a joint venture with the Tohono O’odham’s San Xavier District, which borders Tucson. The business included the University of Arizona’s drone design program. Since that time, Advanced Ceramics has produced drones at a site on Tohono O’odham land close to the Tucson International Airport. The project, involving research for high temperatures and ceramics, was first accepted and then rejected by the Pascua Yaqui Nation, which considered the project too risky.


Tohono O’odham human rights activists continue to oppose the production of drones for the purposes of spying and targeted assassinations. Tohono O’odham say the violation of human rights, and taking of human life, violates the Him’daag, the sacred way of being.
Copyright Brenda Norrell/Censored News
brendanorrell@gmail.com