'Native people don't have any access to any form of media that reflects them. I think its quite significant in terms of our own self esteem and why we have such a high rate of suicide.' --Gary Farmer

Brenda Norrell has been a news reporter in Indian country for 30 years, beginning with Navajo Times during the 18 years she lived on the Navajo Nation. After serving as a longtime staff reporter for Indian Country Today, she was censored, then terminated, and began Censored News as a result. Now in its seventh year with more than 1.7 million views, Censored News is published without advertising or sponsors.

Gary Farmer: The blues and the power of media and theater

Gary Farmer: The power of media and theater 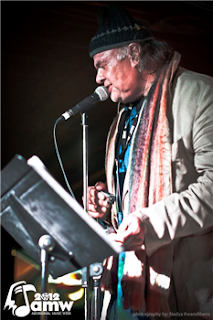 TUCSON -- Onstage at the Loft Cinema, Gary Farmer has a story to tell. Its not just that his blues band, Gary Farmer and the Troublemakers, is the hottest Native blues band out there, it is the collection of stories that Gary has to tell.
Gary speaks of the power of the media, and the power of theater. Weaving songs and memories during the evening he makes it clear that he is neither Canadian, nor US, he is Cayuga. He is Haudenosaunee. He makes another fact clear: Most Native governments are like the US government -- corrupt -- and the last thing they want is freedom of the press.
Native people want to tell their own stories, and the media, particularly radio, is a powerful means of doing this. Onstage, in theater Gary found a platform that worked for him, particularly the rituals of theater.
During tonight's incredible program, Gary joined Pomo filmmaker Timothy Ramos at the screening of California Indian, which features Pomo of Clear Lake, Calif.
Gary also introduced the film 'Dead Man,' which Gary starred in with Johnny Depp. Dead Man was never released in the US, but won the European Best Foreign Film Award, which Gary accepted in Berlin.
﻿
As for Depp, Gary said they share a lot of love, but he never saw Depp after the film. He said it was sort of like he married his wife or something, just didn't see him again.
"We have this distant love, haven't seen him since," Gary said. "He's a great guy." Gary said he was glad the Comanche sort of adopted him.
When asked about Indian stereotypes, he said, "Well they're not ever going to hire me to be Geronimo. You've always got to be a starving Indian, I'm never going to get that work."
With joking aside, Gary talked of materialism, and said it was good that some still have their ceremonies.
Born on the Six Nations Reserve in Ontario, and raised in Buffalo, New York, Gary later found that being on stage was a way to tell stories. "I realized I had power, especially on the stage."
"I'm still working at it."
Receiving laughter and applause, Gary received special thanks from the audience for his support of those resisting at the border, and those protecting Mother Earth.
Gary sang, "We're all equal, no matter what color you are. We got to look to the south man, we gotta help that out. Three quarters of the world starving to death, man, come on. We gotta make a change."