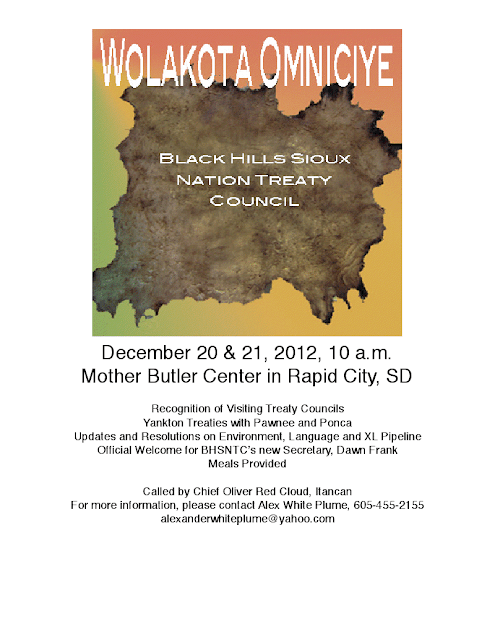 December 4, 2012
Chiefs, Headsmen, Elders and People of the Lakota Oyate:
Mi cante’ etan uha cante’ waste’ nape ciuzapiyelo.
As Itancan of the Black Hills Sioux Nation Treaty Council, I am calling for a
Wolakota Omniciye for the Tiospaye/Bands of the Oceti Sakowin. The gathering will be held on December 20 and 21, 21012, 10:00 a.m. at the Mother Butler Center in Rapid City.
The discussion will include issues relevant to the governance and preservation of the Oceti Sakowin, its culture and territory;
1)Recognition of visiting treaty councils,
2)Yankton treaty with the Pawnee and Ponca,
3)Updates and resolutions on environment and language with information and
strategy concerning the current situation with the XL Pipeline,
4)The purchase of PeSla,
5)Official welcome to the new Secretary of the Black Hills Sioux Nation Treaty
Council, Dawn Frank, and
6)Preview of Spring treaty gathering on strategies emphasizing Lakota treaties
in international forums under our inherent sovereignty.
Please come to the meeting with copies of paperwork and resolutions ready for distribution
We strongly encourage members of the Great Plains Tribal Chairman’s Association to
sponsor their Band’s Treaty Delegates to travel to this important gathering. All are
welcome.
Ho Hecetu Yelo,
Oliver Red Cloud - Ite Sica Tiospaye
Itancan
Black Hills Sioux Nation Treaty Council
Black Hills Sioux Nation
Treaty Council
Pine Ridge Agency, SD
Chief Oliver Red Cloud - Itancan
Alexander White Plume - Eyapaha


STATEMENT BY JOSE ANTONIO ZAMORA GUTIERREZ MINISTER OF ENVIRONMENT AND WATER, OF THE PLURINATIONAL STATE OF BOLIVIA IN THE UN CONFERENCE OF CLIMATE CHANGE COP18 IN QATAR

DOHA, Qatar -- Mr. President of the COP, distinguished Heads of State of countries of the world, Ministers, Officials, delegates and representatives of social organizations, indigenous peoples and communities and farmers of the world, receive a greeting from the Plurinational State of Bolivia and our President Evo Morales Ayma. The planet and humanity are in serious danger of extinction. The forests are in danger, biodiversity is in danger, the rivers and the oceans are in danger, the earth is in danger. This beautiful human community inhabiting our Mother Earth is in danger due to the climate crisis. The causes of the climate crisis are directly related to the accumulation and concentration of wealth in few countries and in small social groups, excessive and wasteful mass consumption, under the belief that having more is living better, polluting production and disposable goods to enrich wealth increasing the ecological footprint, as well as the excessive and unsustainable use of renewable and non-renewable natural resources at a high environmental cost for extractive activities for production.

A wasteful, consumerist, exclusionary, greedy civilization generating wealth in some hands and poverty everywhere, has produced pollution and climate crisis. We did not come here to negotiate climate. We did not come here to turn the climate into a business, or to protect businesses of them who want to continue aggravating the climate crisis, destroying Mother Earth. We have come with concrete solutions. THE CLIMATE IS NOT FOR SALE, LADIES AND GENTLEMEN! Mr. President, The withdrawal of some developed countries of the Kyoto protocol and avoiding of their commitments is an attack on the Mother Earth and to life.The problem of climate crisis will not be solved with political declarations, but with specific commitments. We will not pay the climate debt of developed countries to developing countries. They, developed countries, must fulfill their responsibility. While some developed countries do their best to avoid their commitments to solve the climate crisis, developing countries are making greater efforts to reduce emissions, and paying the price of a climate crisis and that everyday leaves droughts, floods, hurricanes, typhoons, etc. The climate crisis leaves us poorer, deprives us of food, destroys our economy, creates insecurity, and createsmigration. Climate change will make the poor poorer. Poorand developing countries have a great challenge: the eradication of poverty. And we'll have to face a climate crisis for which we are not guilty. In addition to adapting to climate change we must ensure security, education, health, energy for the population, provision of water and sanitation services, delivery communication and infrastructure services, job creation, provision of housing, reconstruction due to loss and damage caused by extreme weather events, adaptation actions, among others. UNIDAD MADRE TIERRA Y AGUA / MINISTERIO DE RELACIONES EXTERIORES ESTADO PLURINACIONAL DE BOLIVIA

Mr. President, We denounce to the whole world the pressure from some countries for the approval of new carbon market mechanisms, although these have shown to be ineffective in the fight against climate change, and that only represent business opportunities. This is a climate change conference, not a conference for carbon business. We did not come here to do business with the death of Mother Earth betting on the power of markets as a solution. We are here to protect our Mother Earth,we came here to protect the future of humanity. Yesterday forests were turned into carbon markets businesses, and the samewas done with the land, they tried to oceans and, worse, to agriculture. Agriculture is food security, employment, life, and culture. Agriculture is along with the land, mountains and forests, the house and the food of our indigenous and peasant communities. WE WILL NOT ALLOW THE REPLACEMENT OF THE OBLIGATIONS OF DEVELOPED COUNTRIES WITH CARBON MARKETS. PLANET IS NOT FOR SALE, NOR OUR LIFE. It is essential that developed countries take the lead withmitigation actions with concrete results and high ambitions and that developing countries do their part within their respective capabilities, and according to financial and technological transfers, solving problems of poverty. Mr. President, In Bolivia we have the vision of Living Well as a new approach for civilization and cultural alternative to capitalism, and in this context we focus our efforts to create a balance and harmony between society and nature. Bolivia, presented here concrete proposals to strengthen the global climate system. We have proposed the creation of the Joint Mechanism for Mitigation and Adaptation for integrated and sustainable management of forests, not based on markets, to strengthen community, indigenous and peasant management of our forests, which can promote climate mitigation actions without transferring the responsibilities of developed countries to developing countries. Also, we promote consistently the creation of an international mechanism to address loss and damage resulting from natural causes and impacts of climate change in developing countries. Our country will not promote carbon market mechanisms such as REDD, and will respect and strengthen community management of forests. Mr. President, We will not allow the people of the world to pay the bill for the irresponsibility and greed. It's time to give concrete answers to humanity and Mother Earth. Let´s be careful of the intentions of some developed parties to make us feel resigned in front of this terrible reality, and admit the inertia and inaction of those countries that are historically responsible of global warming, sending us a message that is better to have a "pragmatic" attitude, which of course will condemn to cook planet and the extinction of the humanity. UNIDAD MADRE TIERRA Y AGUA / MINISTERIO DE RELACIONES EXTERIORES ESTADO PLURINACIONAL DE BOLIVIA Mr. President, brothers and sisters of the world, take these words as a commitment to life and Mother Earth. With this conviction we will be guided to meet the challenge we have in this conference, the challenge of saving the planet, and not to negotiate our climate. Thank you Mr. President.

Mr. President, brothers and sisters of the world, take these words as a commitment to life and Mother Earth. With this conviction we will be guided to meet the challenge we have in this conference, the challenge of saving the planet, and not to negotiate our climate. Thank you Mr. President.
at December 05, 2012 3 comments: