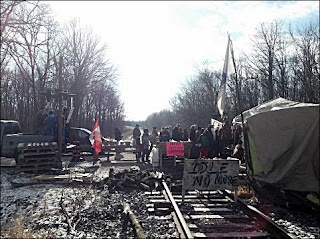 
Citizens of Aamjiwnaang First Nation continue a blockade of CN rail, in support of the Idle No More movement. Aamjiwnaang Citizens are indicating they will continue the blockade until Chief Teresa Spence is granted a meeting with Prime Minister Harper, and there is recognition of the historical injustice inflicted upon the community. Following a community meeting this morning, and a meeting with the Mayor of Sarnia, Chief of Police and CN Rail representative, citizens of Aamjiwnaang have determined to maintain the blockade until community demands are met. Aamjiwnaang citizens are calling on all allies to come support the blockade. Bring WARM clothes and good intentions. Accepting food, wood and warm clothes donations

Aamjiwnaang Citizens agreed to the following demands
1. Letters of support from the Mayor of Sarnia, CN Rail, MP Pat Davidson, and industry telling Harper to meet with Chief Spence.
2. We will consider leaving when this meeting has taken place.
3. That Harper respect and consult on a nation-to-nation basis.