...Two dozen people, including several Native Americans, spoke at Thursday's meeting, more than half of them supporting the removal of cultural references from mascot names.


"The Lamar High School Redskins mascot name is just the tip of the iceberg of the racial discrimination against my people here in America. I am a human being. I am not a mascot," said Steve Melendez, the president of the American Indian Genocide Museum in Houston. "If you want to honor me, teach the truth about genocide that took place here in Texas."... 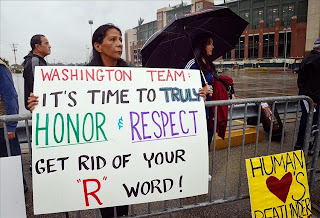 HOUSTON -- This Thursday 12-12-2013 the Houston Independent School District will have a board meeting regards our racist school mascots and to retire them. One of the school mascots is called " the RedSkins " and the drill team are the squaws. The high school is named after the Republic of Texas President Mirabeau Lamar. One of Lamar's first policy to carry out as President of Texas was a policy of Indian extermination. Today, he is called the " Father of Texas Education". On Thursday, a group of people will speak before the school board. We can use all the support we can get throughout Indian Country and people across the Atlantic and Pacific oceans.
We need folks to come out and join us Thursday or write letters of support in removing the racist mascot names from our schools. Senator Rodney Ellis is lending his support to this issue. We need a good number of people to either show up or write/email in to the school board.  Thanks.  ( link to petition)Anna Eastman- Presidentc/o HISD Board ServicesHattie Mae White Educational Support Center4400 West 18th Street
Houston, TX 77092-8501Email Anna Eastman at aeastman@houstonisd.orgTelephone: 713-556-6121Fax: 713-556-6115
http://www.change.org/petitions/lamar-high-school-change-the-redskins-mascot?share_id=kvLFKLXPmx&utm_campaign=share_button_mobile&utm_medium=facebook&utm_source=share_petition
at December 11, 2013