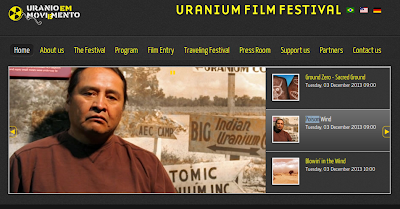 NAVAJO NATION -- On the second day of the International Uranium Film Festival on the Navajo Nation, Shiprock NM Councilman Russell Begaye spoke on the detrimental way uranium cleanup is being done in the Shiprock area. Radioactive tailings and ore are just covered up with rock, rather than hauled away and removed.
Begaye said the drinking water is poisoned in the Red Mesa and Sweetwater area because uranium has been detected in the wells. Currently, a water pipeline is being constructed because of this contamination.
"We continue the fight," Begaye said, pointing out that every Navajo knows someone who has been impacted. Begaye said as a child he and friends would jump in the river for the dead fish floating from the results of the Shiprock uranium mine.
Begaye said the Navajo Nation Council updated the ban on transporting uranium ore across Navajo Nation land, making the prohibition more stringent.
Still, he said uranium mining companies on private land in New Mexico are trying to convince the Navajo Nation Council to allow transportation from uranium mining across Navajoland.
"No more mining on our land," Begay said.
"It changes the DNA of our people," adding that the Navajo people are beautiful people, who are strong and creative, and uranium mining threatens the people.
"We have radioactive dust all over the place, we know that.
"When dust storms occur, we are breathing in that."
Begaye pleaded with Navajo chapters not to give in to the coercion and offers of uranium mining companies.
"Let's stand strong as a people."
Begaye encouraged Navajos to stand strong and united in the battle for cleanup of the radioactive tailings left behind on the Navajo Nation from Cold War uranium mining and to prevent future uranium contamination and disease for Dine'.
The Four Corners region, which includes the Navajo Nation, is considered a "sacrifice zone" by the United States government. Navajos were sent to their deaths in the uranium mines without protective clothing, even though the US knew of the deadly effects of radioactive uranium mining.
The Four Corners region is also poisoned by coal-fired power plants on the Navajo Nation, two in New Mexico and one in Arizona. The land is leased to coal mines and coal-fired power plants by the Navajo Nation government. The power primarily goes to non-Indians in the Southwest, while many Navajos continue to live without electricity. Further, the power plants use excessive amounts of water, while many Navajos continue to haul their water.
Further, the drinking water in the region is widely contaminated from Cold War uranium mining and strewn radioactive tailings which were never cleaned up.