BELTON, Missouri -- December 12, 2013  The Native American community is still shocked and angered by the racist sign saying, "KC Chiefs" Will Scalp the Redsk*ns Feed Them Whisky Send - 2 - Reservation put up by an employee at a Sonic Drive-in in Belton, Missouri.  The photo of which has been shared around the world and promotes negative stereotypes of Native people.  Later, another photo surfaced of a second sign the employee replaced the first racist sign with, "KC Chiefs'' Will Scalp the Redsk*ns Drain the Firewater out of them.  This one was also removed after patrons in Belton, Missouri demanded it.

And so, although we appreciate the tweets and other statements made to the press by Sonic Corporation (NASDAQ: SONC) executives of apology, we feel the company must do something concrete to show that they do not share the views of their employee (who was not fired) at the Sonic Drive-in in Belton, Missouri.  And we call upon both teams (Washington Redsk*ns and the Kansas City Chiefs) featured in the racist sign to denounce the sign (they have not) and to stop using Native people as mascots. 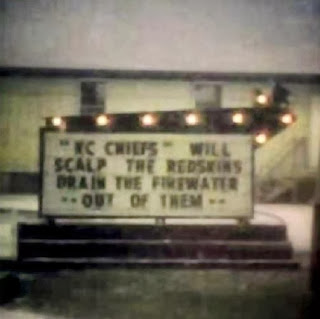 We would like to see the following be done to redress the harm this sign has done and we hope that by doing these things a more positive message will be promoted about Native American people nationally and internationally and that Native Mascotry (the use of Native people as mascots for sports entertainment purposes) will be discontinued by all teams in our nation, particularly in our nation's capital (the Washington Redsk*ns).
These steps will serve to restore a brand name that has been "trashed" as Sonic Corporation itself has said over Twitter.   It will also restore the good relations Sonic Corporation has with all its patrons in the United States and be helpful in redirecting the national conversation about racism and the use of stereotypes in a positive way and hopefully, help bring about the end of the use of Native people as mascots.

We would also like to thank the thousands of Americans who have expressed outrage over these signs.  Your concerns ensures that our country can be welcoming to all of its citizens including its original ones.  We would particularly like to thank the Leadership Council on Civil and Human Rights, a coalition of 85 organizations include the NAACP and the ACLU for passing a resolution calling for the Washington Redsk*ns owner Dan Snyder to drop the team's offensive name.  As Wade Henderson, president and CEO of The Leadership Conference on Civil and Human Rights said:

“This is not someone else’s problem, this is everyone’s problem. Having an offensive slur for the Washington team name teaches young people to celebrate the denigration of people for being who they are. That has a damaging psychic impact on individuals, as well as on the entire nation. Changing the name is the right thing do, regardless of how comfortable fans have become with it. And when Mr. Snyder does decide to put the slur away, I think he’ll discover a new market of consumers who recognize the dignity of all people and want to honor that with the sports teams they support.”
We hope that states like Wisconsin where Governor Walker has failed to stop the passage of AB 297, and are greatly reducing protections against the promotion of Native stereotypes to impressionable youth in their state, will come to realize the truth of Henderson's words.