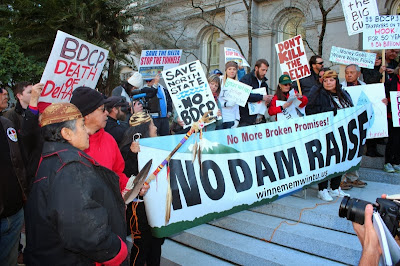 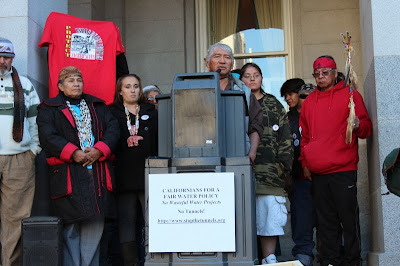 "Turn the pages and you’ll discover what William Burroughs meant when he observed that, 'a paranoid schizophrenic is simply someone who’s discovered what’s going on,'" quipped Bill Jennings, Executive Director of the California Sportfishing Protection Alliance and board member of the California Water Impact Network (C-WIN).

No Dam Raise, No Tunnels. Photo by Dan Bacher

Over 400 people organized by Californians for a Fair Water Policy, a statewide coalition opposing Gov. Brown’s massive water export tunnels, on Friday attended a rally at the State Capitol protesting the Bay Delta Conservation Plan as the 120 day comment period for the BDCP and environmental documents began.


"So, on this Friday the 13th the BDCP public comment period begins," said Bill Jennings, Executive Director of the California Sportfishing Protection Alliance (CSPA). "They give us 40,214 pages of documents – that’s a nine-foot high stack containing 20% more pages than the 32 volumes of the last printed edition of the Encyclopedia Britannica. We’re asked to provide comments within 85 working days – that’s 473 pages a day. You can purchase a printed copy for only $3,000."

"Turn the pages and you’ll discover what William Burroughs meant when he observed that, 'a paranoid schizophrenic is simply someone who’s discovered what’s going on,'" quipped Jennings.

Over 25 members of the California Striped Bass Association; over 20 American Indian activists who have walked across the country on the Fourth Longest Walk that will arrive on Alcatraz Island on December 21; and a contingent of over a dozen people from the Winnemem Wintu Tribe participated in the rally. Delta farmers, environmental activists and community and labor activists also showed in force.

“The end of salmon would also mean the end of Winnemem, so the BDCP is a threat to our very existence as indigenous people," said Sisk.

Tunnel opponents pointed out “fatal flaws” of the tunnels they said would be too costly, create no new water and do nothing to increase regional water self-reliance. Experts identified many impacts from the tunnels that would damage water quality, harm the environment, destroy fisheries and sustainable farming, and impose billions of dollars of increases on water ratepayers. Two-thirds of the water would go to huge corporate agribusiness operations on the west side of the San Joaquin Valley, engaged in unsustainable agriculture, growing permanent crops on arid land.

The opponents assailed the failure to conduct a cost-benefit analysis of the proposal, in addition to the lack of a finance plan, and said the costs would fall on water ratepayers to subsidize unsustainable mega-growers.

Ironically, Jerry Meral, Deputy Secretary of the Natural Resources Agency and Jerry Brown's point man for the peripheral tunnels, announced his retirement from "state service," effective December 31, on the day after the rally.

“I look forward to doing whatever I can in the future to support completion and implementation of a Bay Delta Conservation Plan which will achieve the co-equal goals of ecosystem restoration and water supply reliability, while fully respecting the values treasured by those who live, work, and recreate in the Delta," Meral said in his letter to Brown. 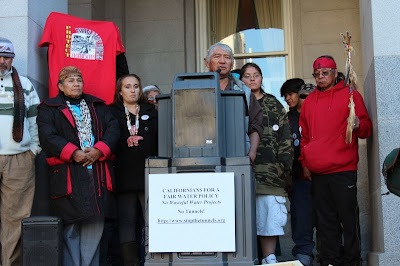 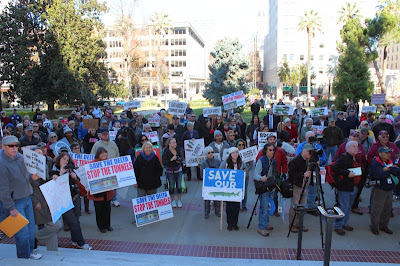 Over 400 people showed up on at the State Capitol on Friday, December 13 to say no to the peripheral tunnels. Photo by Dan Bacher. 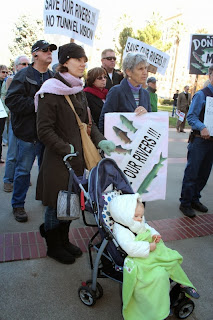 Another mother and baby against the twin tunnels. Photo by Dan Bacher. 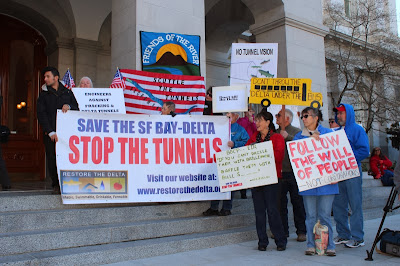 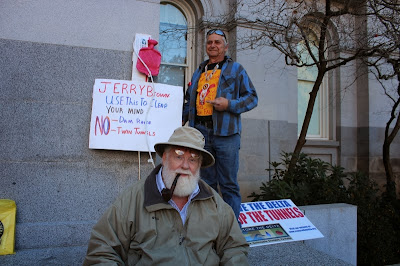 The most creative sign award goes to David Martinez, Winnemem Wintu War Dancer, with his subtle suggestion about how Jerry Brown can "clear his mind." Bill Jennings poses with his proverbial pipe. Photo by Dan Bacher. 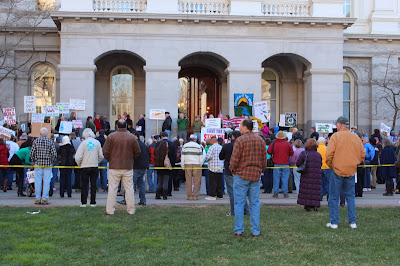 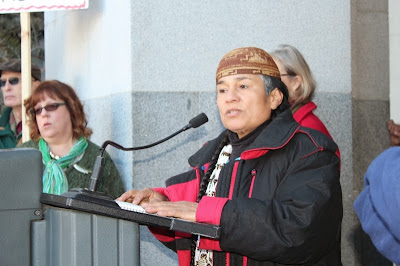 Caleen Sisk, Chief and Spiritual Leader of the Winnemem Wintu, said California should become the biggest salmon producer in the country. Photo by Dan Bacher. 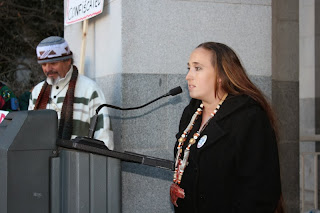 Jessica Lopez, Concow Maidu Chair, explained how the Natural Resources Agency didn't hold the BDCP informational meeting until the day after the tunnel plan was released. Photo by Dan Bacher. 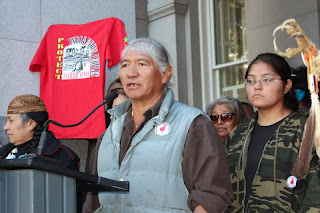 Johnny Bob, Western Shoshone chief and spiritual leader, speaks up against Brown's twin tunnels and a similar plan in Nevada to build a pipeline to ship water from Western Shoshone land to Las Vegas. Photo by Dan Bacher. 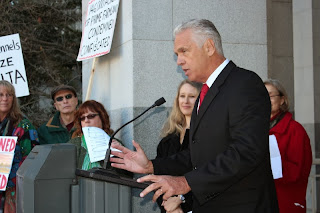 Lawyers against the Tunnels: Bob Wright of Friends of the River with Osha Meserve, Delta lawyer, Stone Lakes Wildlife Refuge, to the left. Photo by Dan Bacher. 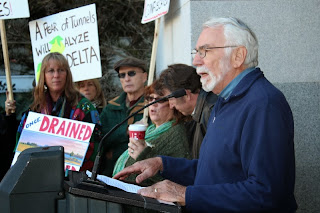 Jack Sanchez, retired teacher and leader in the campaign to restore salmon and steelhead to Auburn Ravine, vowed to do civil disobedience against Jerry Brown's peripheral tunnels if it becomes necessary. Photo of Dan Bacher. 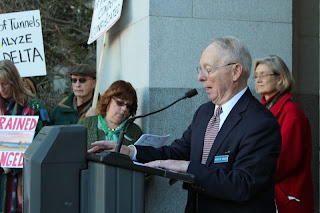 Nick Di Croce of the Environmental Water Caucus points out that there is a much better solution to the tunnels - the Responsible Exports Plan. Photo by Dan Bacher. 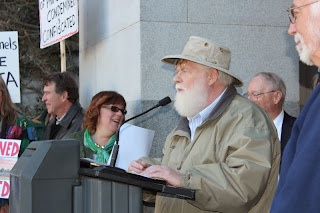 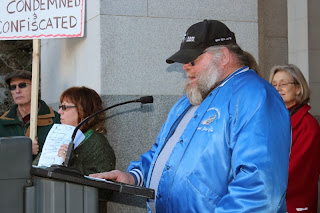 Jim Cox, President of the California Striped Bass Association urges everybody to write a letter to the Governor, their Legislators and their U.S. Representatives opposing the tunnels. Photo by Dan Bacher.


Please share this link from Censored News, located in your browser: