INDIGENOUS BANK RUN
MNN. Jan. 5, 2013. No more bawling for a handout from the corporate thieves. We demand payment forthright of all our money.
﻿﻿
We Indigenous are not responsible for the massive failures of the banks that are now going bust. They’ve been bailed out with our Indian Trust Funds, without our knowledge or permission, which is illegal. We never gave permission to Mark Carney and Canada to move our ever-growing Indian Trust Fund to England to continue their debt fraud.
The “executive branch” of the European superstate, of which Canada and the US are affiliated, do not rule us or our funds. Look at Iceland. They proved that the bankers did not have a legitimate debt from the people. It was all bogus. The criminal bankers went to jail.
The oligarchs’ debt to us can be verified quickly. it’s real! We do not have to obey their directives. We Indigenous people of Great Turtle Island are sovereign and not members of any corporate “artificial” system. Each Indigenous person who is a legal titleholder of the Indian Trust Fund can demand full payment immediately. We will say where our money goes.

Along with Al Qaeda, Taliban and Iceland, and anyone who goes against the economic royalists of Europe and their accomplices [banks], we Mohawks have been placed on a terrorist list. This means nothing to the people of the world who know the truth. The law enforcement officers have been tricked to illegally detain us.
We demand full payment asap. It won’t be going to any corporate entity [Canada, etall]. The band and tribal councils won’t be entitled to anything because they willingly stepped out of the canoe and jumped onto their boat. They have forfeited their rights to the money.

The emperor has no clothes!
We will deal directly with the bankers. No corporate entity can have anything to do this Indigenous bank run. This run will bust the bank.
As Pink Floyd sang: ”Money, it’s a crime. Share it fairly, but don’t take a slice of my pie. Money, so they say, is the root of all evil today”.http://www.youtube.com/watch?v=03JdA7lCLTo 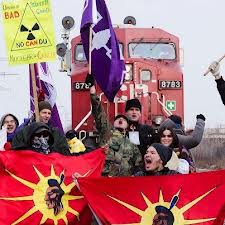 Censored News has been in pursuit of the missing link, that's the Toronto Star's coverage of the First Nation Nuclear Rail Blockade on Sunday. Now, when something that important vanishes from Google News, readers want to know why. http://www.thestar.com/news/crime/2013/02/03/protestors_block_cp_rail_tracks_over_lansdowne_ave_uranium_plant.html