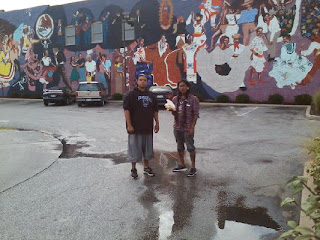 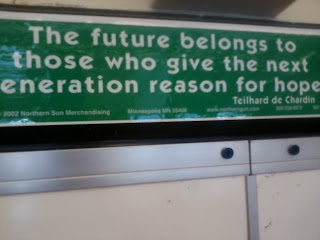 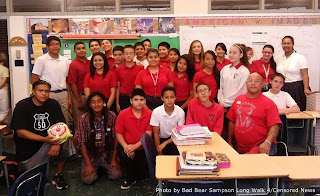 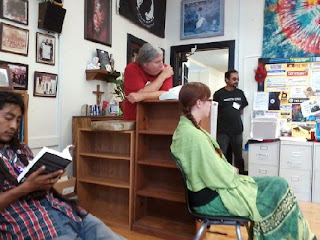 Walkers on Longest Walk 4 Return to Alcatraz talked with students in Kansas today! Thanks to Carl 'Bad Bear' Sampson for the photos for Censored News!
www.returntoalcatraz.com


MNN. Sept. 17, 2013. Prime Minister Harper proroguing – setting aside – Parliament is fascism. It comes from the Latin word fasces [or feces!], referring to a centralized autocratic regime headed by a dictator. The image is individual sticks tied together into a bundle, representing the citizens. The bundle is a big stick called ‘the state’, that rules with unlimited power. People have to obey the rules created by corporate bankers. They have no rights and no voice.

PM Harper & Premier Marois: “What do we do? Those Indians won’t listen to us!”
According to the Great Law, one arrow can be broken. Tying six arrows together creates strength. Everybody is equal and has a voice. The power is in the people.
Fascist parties force all people to obey in exchange for badly needed jobs and services. The leaders constantly promise peace and quiet, work and calm, provided with force if necessary. Those who rock the boat are removed.  A secret authority is formed to bring in line those who oppose the state and to shut the critics up.
Restoring the death penalty for “serious offences” is being discussed! Where will the Gulag prisons be? Many anti-Fascists are leaving Quebec for their safety. They don’t realize that the same conditions exist in the rest of Canada, and south of the border, for that matter.

“Remember, if you’re obedient and quiet, the state will take care of you”.

The children are trained to be the future Fascists. Canada wants a war economy and a war machine. Presently defenseless Muslim women are being harassed by white men who are spitting in the faces of their children. They demand the immediate removal of their head scarves as it violates their ‘culture’. Thousands of our adolescent Indigenous girls are “disappeared” without any investigation. The only population that is growing is from the natural Indigenous people.
Mainstream children are lied to in school about political, economic and social history: “Fascism is the only way to bring the state that you are a part of to greatness”. They become model civilians if they don’t challenge the bosses.
The atrocities being done to non-natives were done to us in the past. The Red Road is the Love Road [Ononkwatsera]. We watch and listen for infiltrators who throw negativity at us, who refuse to come of one mind on our survival.  We are ready to face the cowards, even though we have no weapons or numbers. Our weapon is the truth! Stand with us! Jimi sang about when the world is being created and being brainwashed: “Voo Doo Child”. Jimi Hendrix. 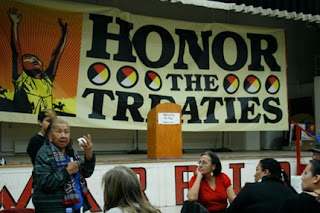 On Friday, September 13, 2013, Owe Aku International Justice Project, on behalf of the Oyuhpa Tiyospaye of the Oglala Lakota Oyate, a band of the Lakota Nation within the Oceti Sakowin (the Seven Council Fires), submitted its report to the United Nations Human Rights Committee for the review of the United States of America under the International Covenant on Civil and Political Rights.

Standing on inherent sovereignty, the right of Indigenous peoples to self-determination, the ancient traditional governance of the the Lakota tiyospaye and treaties made with foreign governments, the independent report opens with:

“While Owe Aku has observed countless US violations of Indigenous rights in the United States, especially in light of the adoption of the Declaration on the Rights of Indigenous Peoples (the “Declaration”), Owe Aku’s report to the HRC will address its two central concerns: (1) the United States’ consistent failure to recognize, honor and enforce Indigenous treaty and self-determination rights, both as a matter of its municipal law and in its international positions, and (2) the propriety need for an international mechanism for vindicating Indigenous sovereign and treaty rights.  The Rights set forth in the Declaration are consistent with those set forth in the ICCPR.”
Owe Aku International Justice Project
Advocate for Lakota Treaties and Mother Earth
oweakuinternational@me.com
www.oweakuinternational.org
www.causes.com/oweakuinternational
646-233-4406
646-395-1617 fax

Owe Aku: UN Report on Human Rights and Treaties 2013 posted by brendanorrell
at September 17, 2013 No comments: