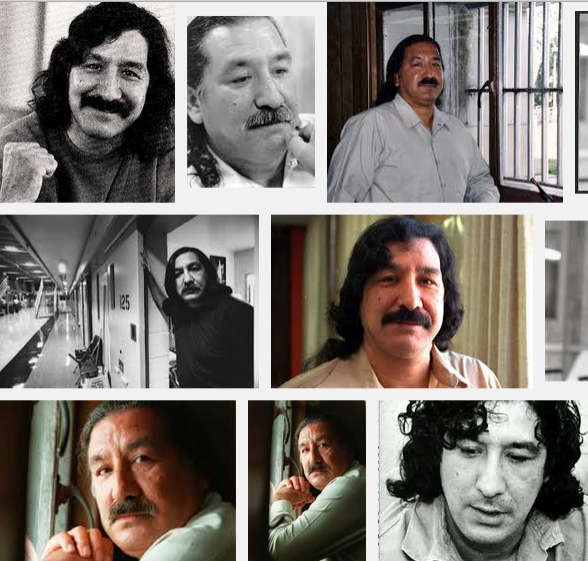 GREEN BAY, Wisconsin -- Imprisoned activist Leonard Peltier described when he was kidnapped from his family at the age of nine, along with his sister and cousin, in a statement read into the record during the Boarding School Tribunal here.
Dorothy Ninham read Peltier's statement.
Peltier described when the men came for him as a child living with his grandmother. Peltier knew he was supposed to run, but he was curious. He watched as if he was in a trance. When he heard the word "boarding school," he wanted to run into the woods, but he didn't want to leave his grandmother, sister and cousin. He feared his grandmother would be taken to jail.
Peltier froze in place, even when his grandmother told him in Chippewa to run and hide.
Then he was taken away with his sister and cousin. He wanted to escape, but he didn't know where he was being taken or how to escape.
Later his cousin, Pauline, was placed in an insane asylum. The school said she had fallen and hit her head.
Peltier described what happened when he arrived at the boarding school. First, there were the buzz haircuts which made the youngest ones cry. Peltier was put in charge of taking care of a younger boy. Peltier was punished for not scrubbing him hard enough in the bath because the young boy started to cry from the scrub brush.
Peltier tried to escape and he and another boy made their escape across the thin ice of a river.
As night approached, it was cold, and they returned to the boarding school. They had to face the music, another haircut, 10 whacks with the ruler, and they had to wear oversized clothes and shoes to show the other children they were runaways.
After reading the statement, Dorothy Ninham said boarding schools set up children for the US military or prison.
"It seems that everything was geared for our people to go from one institution to another," Ninham said.
The boarding schools began identity theft. In Indian country that identity theft means taking our language, our culture and our way of life, she said.
Ninham said there should be a class action lawsuit against the US government and the churches because of what happened in the US boarding schools.
Listen to Peltier's detailed statement of being stolen from his family and his years in boarding school, read by Dorothy Ninham.
https://www.youtube.com/watch?v=KpNSa5vX1qY


“My crime’s being an Indian. What’s yours?”
In his autobiography My Life Is My Sun Dance, Leonard says:
“I know what I am. I am an Indian--an Indian who dared to stand up to defend his people. I am an innocent man who never murdered anyone nor wanted to. And, yes, I am a Sun Dancer. That, too, is my identity. If I am to suffer as a symbol of my people, then I suffer proudly. I will never yield.”
Leonard tells us that when he was nine years old a big black government car drove up to his house to take him and the other kids away to the Bureau of Indian Affairs (BIA) boarding school in Wahpeton, North Dakota. When they got there, they cut off their long hair, stripped them, and doused them with DDT powder.
“I thought I was going to die...that place...was more like a reformatory than a school...I consider my years at Wahpenton my first imprisonment, and it was for the same crime as all the others: being an Indian.”
http://www.iacenter.org/prisoners/peltier/lp_silencescreams-091207/


Revitalization of AIM: Dennis Banks announced a walk across America for Leonard Peltier, beginning Feb. 2015, from Alcatraz to Washington DC