Hopi Rangers arrested two individuals and impounded 120 sheep this morning at the homesite of Tom and Etta Begay in Red Willow Springs.  Heavily armed rangers guarded and blocked nearby dirt road entrances as well.
“The Hopi Rangers came for our homestead early this morning. They tried to arrest my Aunt Etta who is almost 70 years old and my dad Bahe. They had barricades set up at the top of the hill with two police units, when we tried to get around the barricade they chased us for two miles, trying to hit us with their trucks, and they drew their guns at us.  When we got to the house they brought four more units and tried to block us in by the north hogan. They grabbed us out of our vehicles.  A male officer was grabbing me around my waist. I told them they were violating our rights and violating our elders. They were trying to arrest Etta who didn’t even know what they were saying [she doesn’t speak English]. She wasn’t doing anything. They arrested my younger brother Lance and me. Because we were a threat to them for voicing our rights and defending our family. It took three officers to detain me and another three to detain my brother.   We didn’t  go down without a fight. We were let go after six hours of detainment. I told them they are threatening our family who is all alone and elderly and they come out with guns and threaten and scare them. Who would have defended our family if we didn’t come?  We didn’t come with guns and knives; we are not violent, we just came to protect our family.  Who knows what they would have done if we weren’t there. We said, we are not scared.  We are protecting our elders, if you are going to take us to jail for that, do it. They took 120 sheep from our homestead.”–Milayia Yoe, arrestee.
The U.S government has always used “scorched earth policies” against Indigenous people–attempts to cut them off from their food supplies, decimate economies, or destroy infrastructure–as a precursor to forced relocations including the Long Walk of the Dineh. Livestock impoundments come under this category. There is increased surveillance on the families and livestock of the so-called “HPL” including the use of drones.
“We are in a battleground, the endless battleground of the Partitioned Lands. This is the front of the line and when it comes your family there is no yes or no, you have to stand up for your family and your relatives. This is what I was taught. The past was never really forgotten of the way the U.S. Government treated my people. It is still going on, it is still alive. We will fight- not with violence or armor, but with the old ways.  This is a stand for people to know who we are and how we live as Dineh.”–Gerald Blackrock  10/23/14
“The U.S. government is using the Hopi Tribe. We are Native People, we don’t work like this.”–Beulah Blackrock 10/ 28/14
Caroline Tohannie, the elder who had her herd impounded last week, has a court date coming up where she will be facing trespassing charges for being at her homestead.
These impoundments are stressful for the entire community, particularly the elderly:
“Our life is connected to the life of the sheep.  We are alive and strong because of them, and being close to them, being with them everyday, keeps us strong. Especially now in our old age the sheep are important to us. If we are too far from our sheep, we can become frail. “ Clarence and Mary Lou Blackrock, Cactus Valley Elders10/25/14
“I disapprove of the impoundments. They really affect the elderly. Ever since I was a baby I was carried on a horse to herd sheep. I have herded all my life and I am in my eighties.  You have the livestock in your heart, and they want to take that away.”–Jack Woody, Black Mesa Elder 10/25/14
“They way that the rangers are treating the people goes against the Dineh way; it is very taboo to point a gun at somebody. They are traumatizing an already traumatized community. If overgrazing was actually the issue they could just educate people. But it’s not. This is uncalled for.”–Marie Gladue Big Mountain Resident 10/28/14

Calls to Action:
*Lawyers needed! If you are a lawyer or have connections to lawyers, residents are requesting legal assistance.
*Call protests at your local Department of Interior or Bureau of Indian Affairs offices, donate funds here,come to the land as a human rights observer (email blackmesais@gmail.com for more information),
*“Call the Bureau of Indian Affairs, the Hopi Rangers, and the Department of Interior. Ask they stop impounding sheep on the HPL. This is current day colonialism, our food sovereignty is being attacked and ask that they stop the unjust impoundments.”–Louise Benally
Call:
***Please forward this request far and wide by re-posting or sending this to ten people*** 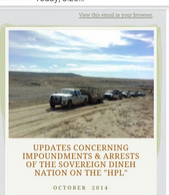 This morning, Oct. 28th – 0620 hrs., Gaah’ Hopi Police & BIA Police, with guns drawn, the Begay resident in Red Willow Springs was surrounded. Main dirt road entrances were guarded by heavily armed police as well. Two teens who were niece and nephew of Etta Begay went out near the sheep corral to take pictures but cops put guns to their heads, and were handcuffed and released at the end of confiscation of the sheep and goats. Etta and her brothers were forced back into their house and police surrounded that house. Nearly 100 sheep and goats were taken but it has been assumed that the police did not have enough room for the 40 more sheep and they were left behind. The situation between non-Native supporters (only ones who acknowledged this resistance against corporate America’s genocide), Dineh elders and the BIA ordered invasion is getting more intense and may get volatile.
Read article at Sheep Dog Nation Rocks:
http://sheepdognationrocks.blogspot.com/2014/10/big-mountain-aggressive-confiscation-of.html?m=1
French translation by Christine Prat
http://www.chrisp.lautre.net/wpblog/?p=2529
at October 28, 2014 No comments:

Pierre, SD — In a move that surprises no one, TransCanada has filed paperwork to block citizens and tribal nations from Nebraska and South Dakota from participating in the formal process of getting their permit for Keystone XL re-certified. Over 40 Nebraskans and South Dakotans have applied for formal “party status” which gives citizens, groups and Tribal Nations the ability to participate in discovery and ask questions to witnesses during the hearing process.
On Tuesday, October 28, the South Dakota Public Utilities Commission (PUC) will decide the next steps for the process and will allow individuals to contest TransCanada’s opposition to our formal participation in the hearing. 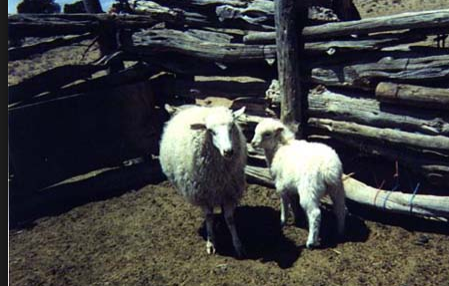 Censored News
TUESDAY, Oct. 28, 2014: URGENT UPDATE:
MORE IMPOUNDMENTS
The BIA directed Hopi Tribal Police have impounded another family's herd this morning. They blockaded the family's driveway, detained in police cars and then released two family members for trying to document, and shut two others in the house. When the Rangers came out of their vehicles they had their guns drawn on the two family members, both in their 20's, and then detained them as they stood in between the police and their elders. All family members who can speak English or document what is going on were removed from the impoundment action. The Hopi police were at the corral with only one female elder who doesn't speak English. They aren't allowing documentation or providing translation.
Human Rights Observers NEEDED IMMEDIATELY.
Bring video cameras. Continue calling the Department of Interior and the BIA. Families have a right to document what is going on for their own safety and the rangers need to provide translators and not separate families.
Stop the human rights violations. Stop the harassment. Stop the impoundments.

Please post and distribute. Nia:wen.
MNN. Oct. 28, 2014. The illegal and immoral purges started before the gunfight on Reichtag Hill in Ottawa. Harper’s role models are Hitler and Stalin. The cabal fantasizes the big lie that they own Onowaregeh, the Indigenous land of Great Turtle Island. Canadian true history is about atrocities against us. War, intimidation and murder promote the big lie. Harper is silencing any critics who don’t fall in line, by ridicule or death, whichever suits him best.

Money and sex are always used to control those in positions of power. CBC mega star, Jian Ghomeshi, the biggest voice in Canada, is going down! Ghomeshi who broke no laws made his sexual proclivities public and is suing for $50 million. The mainstream media cooperates with the “Long Knives” to silence accused critics of the regime.
Like Hitler and Stalin, Harper is removing anyone who stands in the way of his corporate reign of terror. Troubadours, artists, alternative media, politicians, scientists, academics and civil society are being purged. They are threatened to keep their mouths shut or else. Resentment and disgust is building up in some, while the media propaganda machine keeps the rest asleep.

Trudeau, Ambrose, Mulcair & Harper in the Commons echo chamber: “Do as you’re told?”
Canada, a military corporation, run the police state. They guard the stolen treasury of the Queen taken from us. Harper got 30% of the vote. Stalin said, in an election, ”It matters not who wins the vote, only who counts the vote”. Harper, the terrorist, is calling himself the unifier of Canada. Yes, he is unifying the people against him.
Now all the white people are the new Indians, being scrutinized by the Nazi tribunal. Their tactics are same old, same old. Will Harper shoot and kill them with guns and diseases, as was done to us? He will hide in the bathroom and order contract killers like the RCMP and the Canadian military to murder his critics and dissenters.
Soldiers swear allegiance to a foreign Queen in England and her heirs. The men with arms and guns that Canadians are trusting to take care of them don’t owe them or the land they live on any allegiance.
Harper is guarded night and day by the Canadian military. They are unaware that his true role as PMO is to tighten the screws on the 100-year plan to be rid of the “Indian problem” written by Duncan Campbell Scott in 1924.

Harper is like the fool described by the Beatles: : “Nobody wants to know him. They can see he’s just a fool. And he never gives an answer.” Beatles. Fool on the Hill.
MNN Mohawk Nation Newskahentinetha2@yahoo.com For more news, books, workshops, to donate and sign up for MNN newsletters, go towww.mohawknationnews.com  More stories at MNN Archives.  Address:  Box 991, Kahnawake [Quebec, Canada] J0L thahoketoteh@hotmail.comfor original Mohawk music visit thahoketoteh.ws
See Notice: Fake ottawa gunfight was army drill.
Read: Toronto Star: Gunfight on the Hill.
at October 28, 2014 No comments: