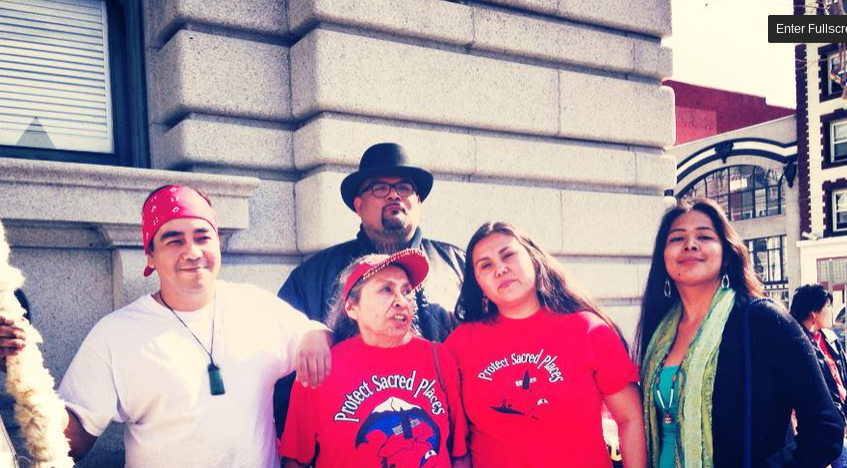 SAN FRANCISCO -- On Thursday, March 12, 2015 a federal appeals court will hear arguments in an ongoing legal battle to protect the Medicine Lake Highlands from desecration related to proposed large-scale geothermal development. Known to the Pit River people, lead defendants in the case, as “Saht Tit Lah” the Medicine Lake Highlands are used for healing, religious ceremonies, and tribal gatherings. The Medicine Lake Highlands are held sacred by Pit River, Wintun, Karuk, Shasta and Modoc Nations who for untold generations have used the highlands for spiritual purposes. According to Pit River Tribal Chairman Mickey Gemmill, “This case might decide the fate of one of our most important places of religious significance and if geothermal development is allowed to occur it will affect countless generations of Native Americans.”
The struggle to defend the sacred Medicine Lake Highlands has been a long one. On July 30, 2013 a lower court ruled against Indigenous peoples and allies in their legal challenge of geothermal lease renewals that encompassed the highlands . The Stanford Environmental Law Clinic, which represents Native Tribes and environmental groups in the case, has appealed this adverse decision to the Ninth Circuit Court. Under contention were scores of geothermal leases, originally executed by BLM in the 1980s with only cursory environmental review and no tribal consultation. “It’s the same old story. The government didn’t follow their own rules and issued leases illegally for one of our most sacred places. Now the people who have cherished the Medicine Lake Highlands are forced to try and get the government to do the right thing. Had they complied with the rules extant in the 1980s those leases likely would not have been issued.” stated Radley Davis, Illmawi band of Pit River and Co-chair of Advocates to Protect Sacred Sites (APOSS).
At the forefront of this issue now are five new proposed geothermal power plant projects that threaten to poison the sacred waters of Medicine Lake. A report by Dr. Robert Curry, a registered hydro-geologist and professor emeritus at the University of California-Santa Cruz, assessing the potential impacts of geothermal development suggests, “the processes that Calpine were trying to use, required chemicals to try and reach hot rock, as opposed to hot mud...were fairly experimental, probably inefficient, and would without doubt lead to contamination of the water supply.” The Highlands are home to many unique plant and wildlife species that depend on clean water to survive; every day during the summer, bald eagles and osprey can be seen diving into Medicine Lake for fish; deer pass through the campgrounds and occasionally an elk or black bear can be seen crossing one of the roads leading to the lake. As California faces its worst drought in at least 1,200 years the Highlands hold tremendous and critical value as a water supply to California throughout Northern CA to the Bay Delta.
“We as a society need to shift our perspective and realize that extraction economies valuing dollars above all else are not sustainable. This is critical for legal forums to fully consider the importance of tribal traditional properties. This shift must happen now in order to preserve the Medicine Lake Highlands and all that it means for future generations of the Pit River Tribe.” stated Darcie Houck, Tribal Attorney representing Pit River Tribe. If development is allowed to proceed, energy extraction from the area will industrialize the highlands requiring construction of wells, pipelines, several power stations, a road system, support buildings, and major transmission lines to carry the power. The air will be filled with steam clouds and the natural environment and wildlife will be permanently disrupted by the scale of industrialization and the year-round presence of large numbers of people in this remote area. Recreational opportunities in the area would be significantly reduced if development is authorized.
The current hearing is part of ongoing and historical legal battles which began in 1998 when all but one of the leases expired and the energy company sought extensions and development. Previous decisions by the Ninth Circuit Court have resulted in the revocation of lease renewals for projects by Calpine Energy Corporation concluding that the BLM and U.S. Forest Service extension of Calpine’s geothermal leases at Medicine Lake violated both the National Environmental Policy Act (NEPA) and the National Historic Preservation Act (NHPS). In 1999, Medicine Lake Caldera (an oval crater within the highlands) was designated as a
Traditional Cultural District resulting in the rejection of another geothermal development by the U.S. Forest Service and the Bureau of Land Management in 2000. In November 2002, the Bush Administration scrapped those protections and approved a $120 million, 48-megawatt geothermal power plant. However, it too was deemed invalid from the last Ninth Circuit Court decision.
“It seems no matter how much we have been asked to give up in the past, someone always wants more. It is our goal to make sure the sacred Medicine Lake Highlands are there for our children and the generations to follow.” –Isidro Gali, Vice Chairman of the Pit River Tribe.
The court arguments may be live-streamed at http://www.ca9.uscourts.gov/media/
live_oral_arguments.php. Archived at http://www.ca9.uscourts.gov/media/ https://www.youtube.com/user/9thcirc/videos
Who: Pit River Tribe, Native Coalition for Medicine Lake Highlands Defense, Mount Shasta Bioregional Ecology Center, Save Medicine Lake Coalition, Medicine Lake Citizens for Quality Environment, Plaintiffs-Appellants; vs. US Bureau of Land Management, Department of Interior, Forest Service, Department of Agriculture, & Calpine Corporation, Defendants- Appellees.
What: Federal Appeals Court hearing. Ceremonial sunrise gathering, march, rally, and press conference immediately following hearing on courthouse steps.
When: Thursday March 12th
7AM: Sunrise Prayer Vigil -- Ceremonial gathering at Yerba Buena Gardens 4th and Howard near the courthouse, SF. Welcoming by Ohlone representatives in Yalamu territory. All are welcome to attend.
8 AM: Protect Water & Sacred Sites, Defend Human Rights March from Yerba Buena Park going to the James R.Browning US Courthouse – 9th Circuit; 95 Seventh Street; San Francisco, CA
9:30 AM: Rally & Prayers outside the Courthouse.

11:30AM-12:30 PM: Court Hearing. Room 3 on the 3rd floor
12:30 -12:45 PM: Press Conference on the steps of the 9th Circuit courthouse immediately after the hearing.
Where: United States Court of Appeals for the Ninth Circuit 95 7th St, San Francisco, CA 94103; Courtroom 3
Note to editors: Colorful photos available upon request.

Please post & distribute. Nia:wen.
MNN. MAR. 2015. The Corporation of Canada does not require the approval of the Ongwe’hon:weh to push through a proposal, only to have a “consultation” meeting. If we don’t take part, that means we acquiesced. This OBJECTION to usurping Ganiengeh land known as the “Seigneury of Sault St. Louis” was presented to the Mohawk Council of Kahnawake Inc. [MCK Inc.].  Mike Delisle, the President of MCK corporation, said his deadline for this deal has to be ratified by the beginning of June 2015.

Moving, Mike?
Delisle was told that, “All 500 nations of Great Turtle Island were represented at the Great Peace of Montreal 1701, allowing the colonial settlers the right to live here. This treaty was broken. Everything reverts back to one day before for all Ongwe’hon:weh [natural people].  The Seigneury grant from Louis XIV in 1680 to the Jesuits is invalid and fraudulent. Louis did not own our land.
MCK Inc. are incorporated INDIANS that act for the CROWN and are overseen by the Privy Council. Their job is to put a dollar value on our land and then sell it. By design Kahnawake will be made unliveable through pipelines, highways, canals, railroads and toxins by transporting stolen resources from the West. These MCK Inc. traitors have forfeited their birthright, Ongwe’hon:weh name, clan, voice and right to live among us. Their actions constitute espionage, conspiracy and complicity in genocide.
Our land belongs to those coming to us from beneath the earth. MCK Inc., Parliament, the Queen, corporations, bankers and their followers are all foreigners. Their small private meetings do not legally represent the will of the People. They must answer to all 49 families, our friends and allies throughout Ono’ware:geh.
Should MCK Inc. continue their treachery, they will be burnt by the fire, which shall burn forever. Political relations can only be conducted through diplomatic channels, prescribed in Teio’ha:teh.
We have asked for the exact names, addresses of and all communiques with MCK Inc. and Indian Affairs and their Privy Council handlers, who are directing this genocide.

We can fight the economic hitman.
MCK Inc.was warned, “You will not be selling, removing our interests or relocating any of us”. Our territory belongs to the Rotino’shonni. MCK Inc’s actions are treasonable, fraudulent, unconstitutional and punishable by death. [Tehon’watisokwa:riteh]
International law affirms when treaties are broken between nations,  everything reverts back to one day before the treaty was concluded. In this case, June 24, 1701. We own everything on Ono’ware:geh. Artificial INDIANS are the problem for all of us.
Mike Delisle reported that 10 of his institutions were consulted. Five groups at the Kahnawake Survival School were vehemently against his Seigneury proposal. Their comments will not be included in the report. He represents the CROWN corporation rule of 51% majority rules [of his followers], contrary to the Great Peace. To distract us, a fight broke out on an issue totally unrelated and not on the agenda. Mike took advantage of this diversion and quickly closed the meeting. As the melee broke out, MCK councillor and bar lawyer, Christine Deom, reminded us of the Trogg song: “Wild thing. You make my heart sing. You make everything groovy. Wild thing. I think you move me. But I want to know for sure…wild thing!”
MNN Mohawk Nation News kahentinetha2@mohawknationnews.com. For more news, books, workshops, to donate and sign up for MNN newsletters, go towww.mohawknationnews.com  More stories at MNN Archives.  Address:  Box 991, Kahnawake [Quebec, Canada] J0L thahoketoteh@hotmail.com
CIA wants to own everything in the world.
Inuit worry about weather.
US declares war on Venezuela.
at March 12, 2015 No comments: 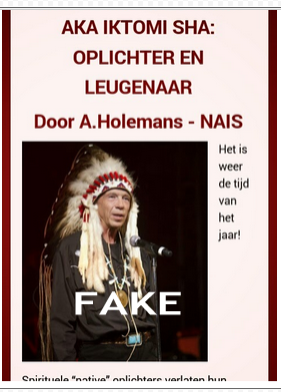 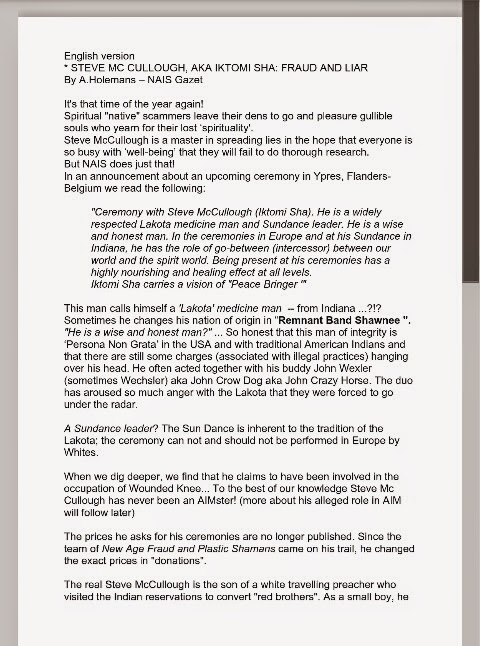 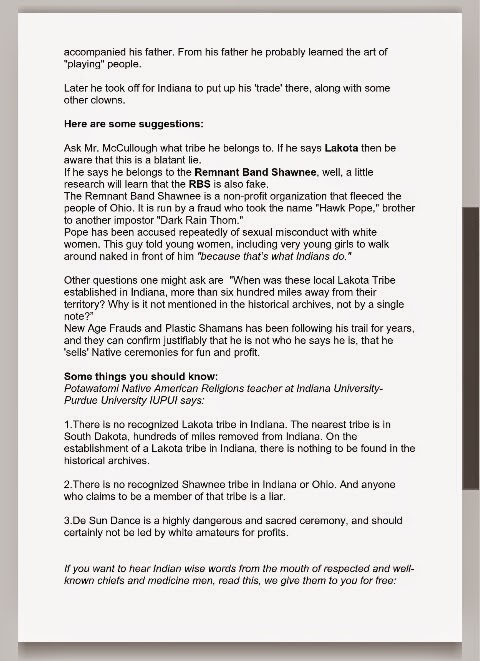 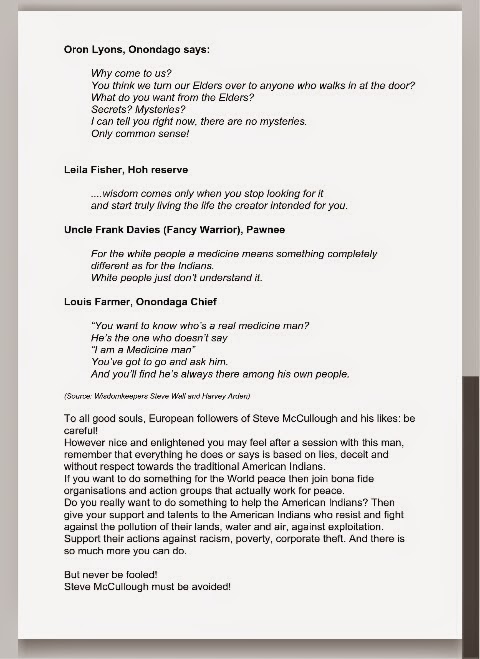