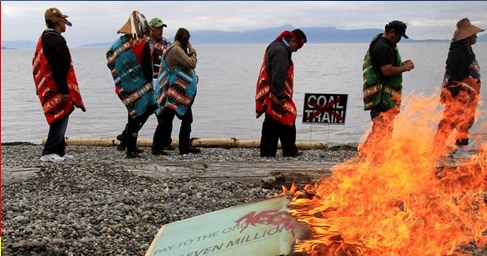 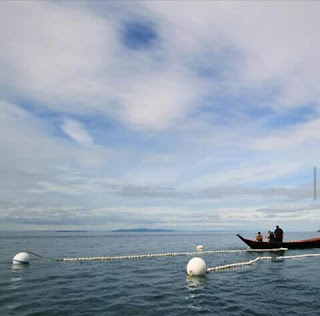 This is a historic victory for treaty rights and the constitution. It is a historic victory for the Lummi Nation and our entire region. We are pleased to see that the Corps has honored the treaty and the constitution by providing a decision that recognizes the terminal’s impacts to our fishing rights. This decision is a win for the treaty and protects our sacred site. 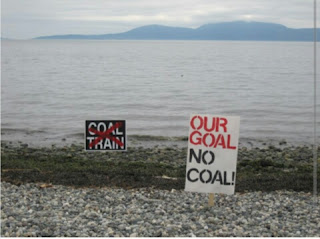 Our ancient ones at Xwe'chieXen, Cherry Point, will rest protected. Because of this decision, the water we rely on to feed our families, for our ceremonies and for commercial purposes remains protected. But this is more than a victory for our people; it’s a victory for treaty rights. Treaty rights shape our region and nation.
As tribes across the United States face pressures from development and resource extraction, we’ll continue to see tribes lead the fight to defend their treaty rights and protect and manage their lands and waters for future generations.
The impact of a coal terminal on our treaty fishing rights would be severe, irreparable and impossible to mitigate. Today’s victory is monumental and the Corps followed a fair process defined by law to make the right decision. The Corps has honored the treaty between Lummi and the United States. We will always fight to protect Xwe'chieXen.

This is big—for our climate, for clean air and water, for our future. It’s also big because the U.S. government is honoring its treaty obligations. After a five-year struggle that engaged hundreds of thousands of people, the U.S. Army Corps of Engineers issued a landmark decision Monday to deny federal permits for the biggest proposed coal export terminal in North America—the SSA Marine’s proposed Gateway Pacific Terminal, a coal export facility at Xwe’chi’eXen (also known as Cherry Point), Washington.
In January 2015, the Lummi Nation asked the Army Corps to reject the project because it would violate U.S. treaty obligations to project the tribe’s fisheries and ancestral lands. This is a huge win for the Lummi Nation and its Northwest community allies over the coal companies
The Army Corps made the right choice and did its duty by upholding treaty rights and honoring the U.S. government’s commitment to those treaties. Time and again, Pacific International Terminals has shown disregard for the Lummi Nation and its allies, who have for years voiced concerns about the project’s public health, economic and environmental impacts.
I have had the great honor of joining tribal leaders in the Northwest and the Power Past Coalcoalition over the many years of this struggle. The Sierra Club is proud and honored to stand in solidarity with these Tribal Nations and community partners in the fight against coal exports in the Pacific Northwest. I’ve been inspired and electrified by the hundreds of thousands of activists across the region who have spoken out at public hearings, written letters, submitted comments and rallied for clean energy instead of coal exports.
It’s encouraging to see this fossil fuel project that poses great risks and harm to communities, the environment and local economies, receiving the thorough scrutiny it deserves. Northwest families deserve and will accept nothing less than this kind of leadership that protects our health, safety, local economy and climate.
This decision comes on the heels of the recent bankruptcy of Peabody Coal and the news last week that the U.S. crossed the milestone of 100,000 megawatts of coal plant retirements since 2010. Peabody was banking on this project as a major customer for its coal and this announcement deals another blow to promises by coal executives that they have a revival on the horizon—claims that we recently challenged in this open letter to the coal industry and industry analysts.
This is a historic win, but there is a lot more work to do. We will continue to fight until our communities are no longer threatened by these dangerous coal export proposals. Specifically, we will maintain our opposition to this project as long as the developers continue pursuing it and we will leave no stone unturned in our opposition to Millennium Bulk Logistics in Longview, which will have public hearings and a comment period this month and the Fraser Surrey project in British Columbia.
We will continue to fight Arch Coal, Cloud Peak, Peabody Energy and other coal companies that would jeopardize our health, safety, local economies and natural resources—like Lighthouse Resources’, Millennium Bulk Terminals, which wants to force a coal export facility into Longview.
These dirty and dangerous projects will not move forward and we will strive to pursue pathways for justice for all communities as justice was upheld today.
© 2014 EcoWatch

Mary Anne Hitt is director of the Sierra Club's Beyond Coal Campaign, which is working to eliminate coal's contribution to global warming and repower the nation with clean energy.www.sierraclub.org
at May 11, 2016 3 comments:

Please post & distribute.
MNN. May 10, 2016. The colony of Canada refused help from seven countries offering aid from Russia, US, Mexico, Australia, Taiwan, Israel and Palestine to put out “the largest forest fire in Canadian history”. Prime Minister Trudeau and his business partners have a different agenda – to scorch the land and force us to move.

Scorched earth total war.
We and our mother refuse to cede our land and resources.
Scorched earth and removal is a colonial policy and still the battle plans of the war room of Indian Affairs.  In the 1800s the military used scorch-earth tactics to subjugate onkwe’hon:weh. Troops were deployed to protect railroad workers from the onkwe’hon:weh, who knew the railroad would mean further encroachment on their territory. Military outposts were put across the region, expanding white settlement on unceded territory.

UN. Canada grilled. The looks on people’s faces tell you a lot.

INDIAN policy is set by the military, to destroy anything that might be useful to the enemy, while advancing through or withdrawing from an area.

We were placed in POW camps called “reservations”. Those not incarcerated were considered hostile, hunted down and killed. onkwe’hon:weh were sent to separate territories under military guard.
Today the onkwe’hon:weh are resisting oil and pipeline development. The Canadian military is attempting to crush our resistance by destroying our land and removing us.
Like the buffalo hunt, the economic basis of our lives is being destroyed to force us to submit. Otherwise we will be attacked, just like in Alberta. Our people are the targets of this military campaign that is heading east. By 2024 they are trying to have us either assimilated or under lock and key or exterminated.

Oil/pipeline’s  economic hitman.
The CEOs of these oil, pipeline and development companies are firmly committed to getting rid of the INDIAN problem.
Paul Revere and the Raiders sing about how the Cherokees survived scorched earth, trail of tears and other genocidal acts: “They took the whole Cherokee nation, put us on this reservation. Took away our way of life, Tomahawk and bow and knife. Took away our native tongue, Taught their English to our young. They took the whole INDIAN nation, locked us up on the reservation. Though I wear a shirt and tie i’m still a red man deep inside.”

Please post & distribute.
MNN. May 10, 2016. Paper money made out of thin air is breaking wind. The bag of wind called “bankers” have nothing. They want control of all our assets, gold, diamonds, oil, minerals, land, trees, water, wind and every resource which are a part of us. They try to put a dollar value on everything.

For hundreds of years we have been almost exterminated because of this. The mass murder [genocide] failed because we and our mother continue to co-exist to follow the kaia’nere:kowa. We are tied to the earth. The bankers are definitely not. The internet exposes the UN Depopulation Agenda 30 to rid the world of onkwe’hon:weh.

Bankers’ world map.
All our gold taken from Kirkland Lake, at the time the biggest gold mine in the world, is gone. Three years ago Mark “Carnage” Carney vacated the Bank of Canada and went to the Bank of England with our assets.

According to Admiralty laws, the CROWN thinks it has possession of everything and everyone on earth as their legal property! They decreed they own us, our names, birth certificates, drivers licenses, homes, property, businesses and land. They purport to give permission to their subjects to use their props according to certain time limits designated in their scripts [loans, mortgages, etc.]. Everyone is measured by their ability to pay the banker on time every month.

Only our mother and her creation are real. Everything she created cannot be relinquished. Man-made scenarios are all planned by the bankers, every war, election, economic upturn and downturn, etc.

Corporate tribal chief Sid Hill at UN to support Agenda 30.
Our relations in the natural world have all the assets the bankers want. The trees, rocks, four-leggeds, winged ones and the rest of our relations in nature will never play this “monopoly” game the bankers have instigated worldwide. Their plan for the final solution is carved in the Georgia Guidestones. They plan to reduce the world population to 500 million to kill 80% of the onkwe’hon:weh. Kissinger calls us “useless eaters”.
We are real even though Canada and US fraudulently register or enroll us in their Admiralty system.
It appears the Hegelian dialectic is in play now with the Alberta wildfires. A problem was created so the colonial settlers would demand a solution, “Save us. Give us the pipeline”!

Looks like a controlled burn!
As Hank Williams sings in his forestfire shuffle: “I’ll gas up my hot rod stoker. We’ll get hotter than a poker. You’ll be broke, but I’ll be broker. Tonight we’re setting the woods on fire”.