Houma Native to Speak out at Shell Annual Meeting: Netherlands May 24, 2016

Keep it in the Ground: Intervention from Gulf of Mexico Indigenous Delegate at Shell Annual General Meeting
Photo opportunity outside the Annual General Meeting (AGM): Circustheater, Circusstraat 4, The Hague, The Netherlands, Tuesday, May 24, 2016, 9 am local time.
For interviews with delegate contact:
Suzanne Dhaliwal, UK Tar Sands Network  0044 777 269 4327 suzanne@no-tar-sands.org
Monique Verdin, 001 504 330 0768, moniquemverdin@gmail.com
WHAT: Indigenous delegate from the Gulf of Mexico will speak out against offshore drilling at the Shell AGM 2016, and will present a pop-up exhibition of 10 foot professional photos documenting climate impacts on communities of New Orleans. An action will also take place in the Gulf coast on May 24th to amplify the Shell AGM intervention, as residents call for an end to the US federal government sale of ocean drilling leases.
Monique Verdin, resident of the Louisiana coast and member-elect of the Houma Nation Council will travel to the Shell AGM in the Netherlands, supported by the Indigenous Environmental Network and UK Tar Sands Network to call on the board and investors to put an end to new offshore leases in the Gulf of Mexico in light of the history of environmental devastation in the Gulf and its related community impacts, as well as the recent 90,000 gallon Shell oil spill. The ecology and local economy of this region is still reeling from the impacts of the BP Deepwater Horizon Disaster in 2010.
WHO:  Monique Verdin is an indigenous daughter of southeast Louisiana’s Houma Nation, and is a photographer and filmmaker.
“Multinational corporations continue to drill off our coast, while the federal government is putting more offshore lands onto the auction block than ever before. This is absurd. The only way to ensure we protect the water and sanctity of life in and along the Gulf Coast is to put an end to extreme fossil fuel development. Oil and gas infrastructure, from pipelines to wells to refineries, are gambling with the health of our environment and the wellness of our communities along the coast. We need immediate action to facilitate just transitions and the ability to ensure we keep carbon in the ground for our communities across the Gulf and for communities around the planet.” Monique Verdin
As a Hurricane Katrina evacuation veteran and a witness to Deepwater Horizon disaster, Monique was inspired to become an active community organizer to oppose new leases in the Gulf. Her stunning photographs document this devastation. The indigenous people of the Mississippi River Delta are witnessing rapid land loss due to rising seas and an eroding landscape desecrated by fossil fuel mining and manipulations. Monique documents this as a personal journey in her film ‘My Louisiana Love’ (2012) which has been screened internationally.
WHY: Coastal communities in the Gulf of Mexico oppose Shell’s exploration of new leases of offshore drilling, the risks of deepwater drilling as evidenced by the recent Shell oil spill in the Gulf this month, and the impacts of climate change on coastal communities. These communities also experience impacts of explosions, poor air quality, and failure from Shell to address these concerns.
Monique participated in the Break Free actions in Washington DC on Monday, May 16th, 2016. 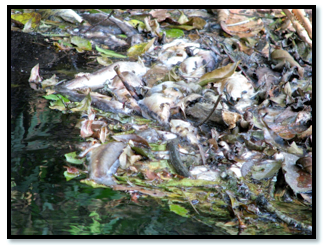 A mass amount of dead fish piled together on the surface of the Chiquita River the same day, when that Los Andes Extractor threw its residual waste waters into the river after extracting the palm oil