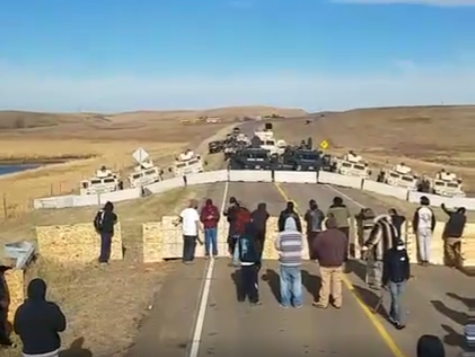 Below, listen: Live in front of CNN building in Los Angeles Friday night
at October 28, 2016 7 comments: 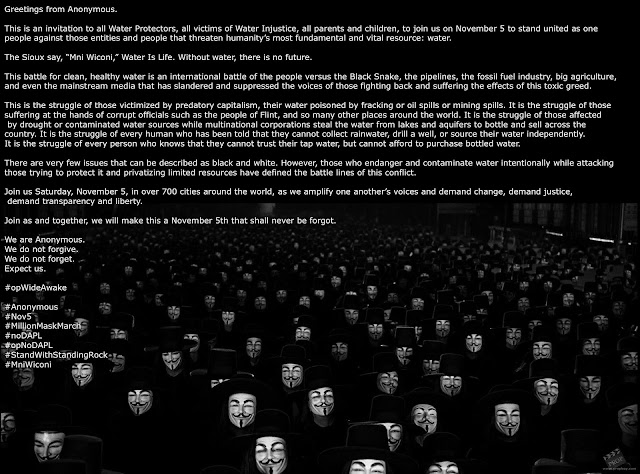 THE TATANKA ANSWER THE CALL

Please post & distribute.
MNN. Oct. 28, 2016. The call is out to all species. Because the people are following the original instructions to survive and co-exist with nature on mother earth, the buffalo, who still follow their original instruction, arrived at Standing Rock.

WATCH THE BUFFALO STAMPEDING TO THE RESCUE!  https://www.facebook.com/walt.pourier/posts/10210161842184469
When the corporations do not follow the original instructions, they do not belong here on this earth. 50% of all wild species on earth are now extinct since 1970. Heavy machinery to dig holes on our mother to dig up her innards and put a filthy pipe in her. It looks like they are digging a big hole for those who resist.

Lakota Archambault speaks to the UN in their Chamber in Geneva. UN Human Rights Council asked to act on genocide At International World Court. We call on the United Nations to have their prosecutor stop this act of genocide in the international world court.
All pipelines are acts of genocide. US Army slaughtered 65 million buffalo.That is why the buffalo came. They were the first victims when General William Sherman murdered 65 million to starve out the Lakota. They went against nature. They always have. They are doing it again. That is what the United States of America is. The USA is a genocidal entity and the world is watching.

Armed with the great peace.
Ted Nugent had it right back in the 1970s: “The Indian and Buffalo existed hand in hand. The indian needed food, skins for a roof, but he only took what he needed. Millions of buffalo were the proof. But then came the white dog with his thick and empty head. He couldn’t see past the billfold, he wanted all the buffalo dead. It was sad… Then I looked above the canyon wall. Some strong eyes did I see. I think it’s something coming around to save our asses. I think they’re going to save you and me. It was the leader of the land, the Great White Buffalo. He got the battered herd and lead them across the land. With the Great Buffalo, they’re going to make a final stand. Look out. Here he comes. He’s doing alright, making everything right.” [Great White Buffalo]
MNN Mohawk Nation News kahentinetha2@yahoo.com for more news, to donate and sign up for MNN newsletters, go to mohawknationnews.com More stories at MNN Archives. thahoketoteh@ntk.com Address: Box 991, Kahnawake [Quebec, Canada] J0L 1B0 or original Mohawk music visit https://soundcloud.com/thahoketoteh
LET’S TELL THEM WHERE WE STAND: Politicians, Corporatists, Band & Tribal Councils and sell-outs that are cooperating with pipeline companies; ENERGY TRANSFER PARTNERS OF HOUSTON http://energytransfer.com/contact_us.aspx
https://www.facebook.com/Simple.Swill23/videos/1352876621403617/
https://www.facebook.com/IndigenousPeopleOfAmerica/videos/1300245503339333/?hc_ref=NEWSFEED
http://rinf.com/alt-news/newswire/tribe-protesting-dakota-pipeline-approves-its-land-to-relocate-illegal-camp-report/
http://www.veteranstoday.com/2016/10/27/vladimir-putin-the-united-states-continues-to-sleep-with-al-nusra/