GREAT FALLS, Montona — The National Native American Hall of Fame held its second annual Induction Ceremony on Saturday, Nov. 2, at the Cherokee Hard Rock Hotel and Casino in Tulsa, Oklahoma. The Master of Ceremony was noted multi-disciplinary artist Randy Kemp (Choctaw/Muscogee Creek/Euchee). The Kiowa Black Leggings Warrior Society presented the colors. The Anque Family (Kiowa) was the drum group.
Award presenters included: Hester Dillon (Cherokee Nation of Oklahoma), program officer for Indigenous communities, Novo Foundation; James Pepper Henry (Kaw/Muscogee Creek), director and CEO, American Indian Cultural Center and Museum, Oklahoma City; Walter Lamar (Blackfeet/Wichita), National Native American Hall of Fame Board of Directors; Ayla Medrano (Kiowa/Comanche/Muscogee Creek), executive director, American Indian Chamber of Commerce of Oklahoma; Joyce Oberly (Comanche/Osage/Chippewa), commander, Public Health Corps; and Bailey Walker (Chickasaw), president, American Indian Chamber of Commerce of Oklahoma.
The mission of the National Native American Hall of Fame is to recognize and honor the inspirational achievements of Native Americans in contemporary history. Twelve individuals were recognized this year for their accomplishments and what they have meant to Indigenous peoples across the globe.
The 12 Inductees are: Lucy Covington (d. 1982), Colville; Ada Deer, Menominee; Louise Erdrich, Turtle Mountain Chippewa; Billy Frank Jr. (d. 2014), Nisqually; Forrest Gerard (d. 2013), Blackfeet; Hattie Kauffman, Nez Perce; Oren Lyons, Onondaga; Richard Oakes (d. 1972), Mohawk; Elizabeth Peratrovich (d. 1958), Tlingit; Pascal Poolaw (d. 1967), Kiowa; Mary Golda Ross (d. 2008), Cherokee Nation of Oklahoma; and Wes Studi, Cherokee Nation of Oklahoma.
“Our Class of 2019 Inductees includes a number of names that are familiar to many—some of them have gone on to the other side and we honor their memory tonight,” said Walter Lamar (Blackfeet/Wichita), National Native American Hall of Fame board of directors. “We have included some who may not be so familiar but should be better known for their heroic accomplishments.”
“Living or deceased, well known or not so well known, all of our Inductees this year absolutely deserve to have their names and stories etched into our collective memory,” said Lamar. “Our stories are many, our stories are strong, our stories are of resilience, our stories are heroic, our stories are of persistence, our stories need to be told, and that we will do.”
“The Indian Movement of the 1960s and 1970s, in particular, gave our nation many iconic Native rights leaders and activists but Native activism really goes back much farther than those decades—and we have recognized that activism tonight,” said James Parker Shield (Little Shell Chippewa), National Native American Hall of Fame founder and CEO. “Our 2019 Inductees have all achieved greatness and bring honor to their nations and communities.”

Zapatistas Call for Meeting in Defense of the Territory and Mother Earth Dec. 21 -- 22, 2019 San Cristobal, Chiapas


CALL FOR MEETING IN DEFENSE OF THE TERRITORY AND MOTHER EARTH

Invitation to a Gathering in Defense of Territory and Mother Earth

To the peoples of Mexico and of the world:
To the national and international Sixth:
To the CIG support networks:
To the press:

Capitalism is a world economic system that has, since its birth, operated against human life and our mother earth. Its logic of accumulation and profit can only be reproduced through the ever-increasing exploitation of human labor and permanent dispossession of the land and territory of all of the peoples of the world, especially originary peoples.

In its current neoliberal phase, capitalism takes on ever more monstrous forms, declaring open war against humanity and the earth, our mother. Its current economic model is based on the global reach and dominance of financial capital over peoples, nations, and entire continents. Sustained by massive military and extractivist industries, this system’s insatiable logic of capitalist accumulation and consumption is fueled through real or fictitious wars, the proliferation of organized crime, as well as foreign invasions and coup d’états, putting the very conditions for human existence on the planet at risk.

Furthermore, the current system has intensified the patriarchal organization it inherited from previous systems and civilizations, becoming a violent enemy not only of humanity in general but of women and our mother earth in particular. That is, the exploitation of and deep structural violence against women are characteristic of capitalism, although they were born before it. Private property, the basis of the capitalist system, can’t be understood or explained except as part of a patriarchal system of domination over women and the earth.

The capitalist system dominates Mexico and all other countries of the world, and not even those governments which proclaim themselves to be leftist or progressive can escape the reality of a destructive system that is driving humanity toward the abyss. Thus a clearly anti-capitalist and antipatriarchal defense of human life, of the territories of our peoples, and of the earth are urgent.

As part of this immense task, we invite you to a:

Forum in Defense of Territory and Mother Earth

To be held December 21-22, 2019, in the Caracol JACINTO CANEK (CIDECI in San Cristobal de las Casas, Chiapas, Mexico), centered on the following discussion topics:
A Diagnostic: Environmental Devastation and the destruction of mother earth under contemporary capitalism
Increasing Aggressions: The dispossession of indigenous, rural, and urban territories; the dispossession of common resources; wars of occupation; extractivism; and organized crime
Capitalism and Patriarchy: Structural violence against women and mother earth
Our Struggle for Life: The construction of anticapitalist and antipatriarchal alternatives

For the Full Reconstitution of Our Peoples

Zapatista Army for National Liberation
at November 22, 2019 No comments: 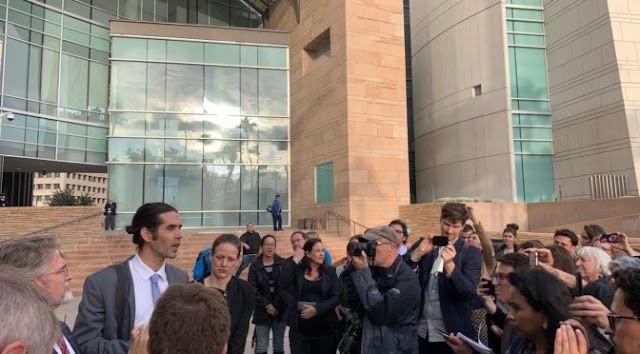 On November 20th, a jury acquitted Dr. Scott Warren on 2 counts of felony harboring. Below are statements shared after the verdict was released:

By No More Deaths
Censored News

“Everyone here did diligent, detailed, and amazing work. And regardless of the verdict our preparation and commitment has always paid off. I love you all. And to those who aren’t here because they are keeping up the humanitarian work in the desert, I love you, too.
And to local residents who have always provided the stranger at their door with food, water, and humanitarian relief—you know I love you as well. Both in and out of court our work here has been to educate. To explain the complicated context of the border with clarity, and to bring an understanding of the humanitarian crisis to those who will listen.
There are others who disagree with our humanitarian work. Some of those folks are in this very courthouse—but they are also our neighbors, friends, and very own family. I understand that they follow a moral compass that guides them to different conclusions about the border than me. And I know that I have much to learn from their perspectives, experiences, and frustrations as well.
And to migrants like Jose and Kristian, who are truly the ones at the center of this story, our hearts are with you for the dignity, respect, and self-determination that is your right.
Unfortunately, the damage to land and life in the border region not only continues, but has been ramped up, way up, since all of this began. Throughout the trial we mistakenly referred to the land surrounding Ajo as a military range, a wilderness, a Border Patrol area of responsibility. But it’s O’odham land. All of it. And now, a new 30 foot high wall threatens further dispossession of native people and the destruction of this important and beautiful landscape.
Let’s all take a deep breath, get some rest, and be ready for—and open to— whatever comes next.”

“My name is Geena Jackson and I am a volunteer with No More Deaths.
Today the defense attorneys said in closing arguments that despite varying moralities in our current society, we have one thing in common, and that is the law. But this community, in Southern Arizona, and in every community along any border, we know that we have much more in common. We have our humanity, and no law or border can touch that. We have been saying for years that humanitarian aid is never a crime, and today 12 jurors agreed. But today I also want to remember that just being human is never a crime. They can try to regulate our communities, our movement, our communication, and our humanity, but we will resist. We can never stop caring for each other, and as living, loving beings in this desert we can never stop sharing water, food and our homes.
Scott was accused repeatedly of providing orientation to those who needed it. In court Greg Kuykendall said, “It is a human right to know where you are.” In these borderlands communities, we know where we are. We live near a border, along the lines that the state uses to determine citizenship, to define whether or not you belong. Global migration patterns are going to intensify. The climate crisis will lead to more and more displaced families. This wall being built on stolen land is not just an attempt to stop those currently walking in the desert, it is being built to try and stop the thousands who are coming seeking refuge. Now is a moment for orientation. Know where you are, and give orientation to those who don’t. Know who you are, and how you will respond, and never let any government or law challenge that. In our communities, we know where we are, and we are so much deeper than any border can define. We know what resilient people and communities look like.
I want to hold space now for the entities that this courthouse has violated. Jose and Kristian, the two people arrested with Scott, have been talked about for weeks, their intentions and actions have been deliberated over and over again. Pictures of their faces and their bodies have been flashed in this courthouse over and over again. And that was wrong. I want to take a moment to honor that a smiling selfie during an incredible journey to tell your loved ones you are ok, is a powerful and beautiful act of resiliency and comfort. Jose and Kristian’s actions and pictures do not belong anywhere near a courtroom. I want to take a moment of silence for these two men wherever they are today.
I also want to take a moment to honor this desert. Being in that courtroom I heard our home referred to as a vast nothingness over and over again. But this desert is full. It holds the lives and loves of our communities. It holds the spirits of the thousands of disappeared. It holds plants and creatures that thrive on just enough rain. This desert has taken the beating of border militarization and wall construction and remains powerful, despite what any human hands try to do.
This battle has been long and exhausting. I resent that we ever had to fight this battle in the first place. But through it all, we never stopped providing humanitarian aid. We thank all of our supporters far and wide who have followed this trial and who have taken actions big and small to help us get through to today.  We hear you and see you and we know we are not alone. We know that there are communities all over the country, indeed all over the world, that are organizing in their own homes, schools, and churches.. Thank you for continuing to put water in the desert, for searching for the lost and the missing, thank you for welcoming in those who needed a rest.

Thank you to those who never stopped fighting deportations, trying to prevent anyone from ever having to make this journey in the first place. This battle has been long, and there are so many greater battles yet to come, but let’s take today and just celebrate that we won.”
at November 22, 2019 No comments: