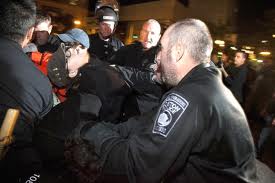 Posted at Censored News http://www.bsnorrell.blogspot.com
at October 10, 2011 No comments:

The Navajo Nation has previously taken very serious stands to protect the Holy San Francisco Peaks with numerous resolutions including one in 1998 calling for the dismantling of the ski area and litigation.
It would be contrary to all previous positions that the Navajo Nation has taken to now support use of groundwater for snowmaking on the Holy San Francisco Peaks.
The proposed legislation sends the message that desecration of Dook'o'oosliid is approved by the Navajo Nation.
Additionally, supporting groundwater snowmaking at this time would threaten to UNDERMINE two current legal cases; the Save the Peaks Coaltion v. Forest Service and the Hopi Tribe v. City of Flagstaff.
This is a serious consequence that the Navajo Nation should consider prior to any decisions regarding this proposed legislation.
The writers of this legislation did not consult or engage in dialogue with litigants, NGOs and individuals who have long been actively engaged in the issue.
At minimum the Navajo Nation Council should convene a meeting with these stakeholders prior to considering an action of this nature.
This proposed legislation further demonstrates that the sponsors and writers are out of touch with the grassroots people who have been working on this issue for more than a decade.
There are a number of alternative means that the Navajo Nation Council can use to effectively address desecration of Dook'o'oosliid that do not include supporting a piece of legislation that: 1. supports Snowbowl's further desecration of Dook'o'oosliid. 2. undermines two current legal cases. 3. ignores and undermines grassroots work and strategies. 4. betrays previously held unified positions with other tribal entities.
Ahe' hee',
Klee Benally - Protect the Peaks Activist
Forest Lake Chapter
Legislation 0420-11 An Action Relating To Resources And Development And NAABIK’IYATI’; Supporting The Use Of Groundwater For Snowmaking On Dook’o’oosliid (San Francisco Peaks).

Also see:
Hopi Tribal Council does not support Navajo's proposal to use groundwater for snowmaking on Nuvatukyaovi
http://bsnorrell.blogspot.com/2011/10/hopi-tribe-does-not-support-navajo.html

Arrests of Occupy Iowa demonstrators in Des Moines on Sunday night.
at October 10, 2011 No comments:

TUCSON -- The United States was funneling guns to the drug cartels during the Bush administration in an operation based in Tucson, Operation Wide Receiver, years before Fast and Furious began in Arizona. Further, a cartel member now in custody in Chicago says the United States and the Sinaloa drug cartel have been working together.

Although the news media has focused on the ATF’s Fast and Furious, another operation, Operation Wide Receiver, allowed guns to “walk” into Mexico during the Bush administration, 2006 -- 2007, according to a Tucson gun seller who kept a lengthy journal.

While the news media and Congressmen focus on the Obama administration, the fact is that Project Gunrunner actually began in Laredo, Texas, as a pilot project in 2005, according to the Department of Justice. (1) It was this same area -- the Texas border area, and south along the Gulf in Mexico, where the most deaths, massacres and tortures have been carried out.

Back in Tucson, Mike Detty told CBS News that he began as a confidential informant for the Bureau of Alcohol, Tobacco, Firearms and Explosives in 2006. At first Detty reported a suspected gun smuggler to the ATF after a gun show. Then, the ATF asked him to work as a confidential informant. After that, he sold about 450 firearms as part of Operation Wide Receiver, from his home business Mad Dawg.

Detty said he did not realize in the beginning that the US was allowing the weapons to “walk” to criminals in Mexico. Detty told CBS News, "My first day as an informant, if they had said, 'Here's our plan, Mike: We're going to let as many guns go across the border as they can haul, and we're just gonna look and see where they pop up,' I'd have said, 'No way. That's not a plan. That's idiocy.'" (2)

In an e-mail made public this week, Detty complains about the low pay and lack of a reward or bonus and makes it clear who came into his living room. "I'd be happy to give that (informant pay) money back if you'd just leave me alone. Would you take $16,000 to have cartel (low-lifes) in your living room?"

The US now is trying to clamp down on Zambada’s testimony by applying a national security law to his case, the Classified Information Procedures Act.

On the streets of Tucson, none of this is big news.

Here, most people understand that there would be no drug war in Mexico without the demand for drugs in the United States. Here most people know about the US military’s black ops. Here, people know how the US trained Latin military officers to torture at the School of Americas, and how the US Army trained the special forces who later deserted and became the Zetas, the most notorious murderers in Mexico.

The US Army even has its manual online stating that the United States furnishes guerrillas with funding and weapons, to destabilize governments and achieve other US agendas. Most people here remember that the airstrips around Marana and Tucson were used as airstrips when the US brought drugs in from Vietnam, smuggled in body bags during the Vietnam War, as exposed by former CIA agents.

Still, there are always questions on the streets of Tucson.

Less than two weeks ago, on Sept. 28, the streets were roped off downtown by police. “There’s a bomb,” said one police officer on Congress Street downtown.

There was no bomb, but there was a truck load of weapons near the federal buildings and courts. It was at the same time that Jared Lee Loughner, charged with killing six people and wounding 13 others, was in Tucson court concerning his medication, a few blocks away. There was little explanation by police of the truck loaded with weapons, but there was one arrest. (4)

Back in Washington, Republican Congressmen had no idea that their probe, and demands for the truth about gunrunning to Mexico’s drug cartels would lead back to the Bush administration. The US Attorney General, appointed by Bush in Feb. 2005, was Alberto Gonzales.

It was the murder of US Border Patrol agent Brian Terry in December, south of Tucson, that propelled Republican Congressmen to use Fast and Furious as a political hammer. However, Terry was just one of the people killed with the weapons that ATF allowed to “walk” into the hands of drug cartels.

ICE Agent Jaime Zapata was also killed with one of those weapons in northern Mexico. How many people in Mexico and on the border were killed with those weapons? It will never be known as the majority of the weapons remain in use and were never traced.

There is another, more disturbing factor.