IDLE NO MORE: Flash Mob Round Dance - Shiprock, NM
by Denette Chee-Chief and Shiela Chee-Chief
UPDATE
WATCH VIDEO OF SHIPROCK FLASH MOB
ROUND DANCE
http://www.youtube.com/watch?v=iz02Up6nH9o
Friday, December 21, 2012
6:00 pm
Nizhoni Park (at da river bridge)
Navajo Nation 110 percent supports IDLE NO MORE. Come on down to Shiprock to show your support for our Canadian brothers and sisters! Nizhoni Park is located next to San Juan River by the bridge. EVERYONE INVITED. Bundle up and bring your signs!
BRING DRUMS...BRING COFFEE...BRING HOT COCOA...WILL HAVE BONFIRE...ALL PEACEFUL!!
Navajos in Shiprock, N.M, on the Navajo Nation are supporting Idle No More!

Below: Idle no more Saskatoon! 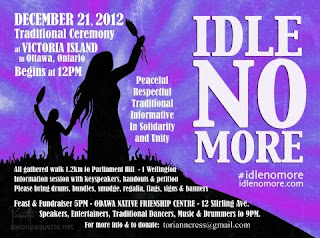 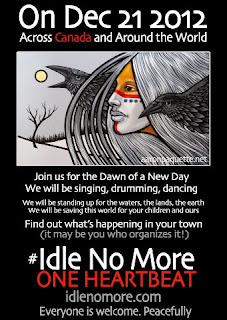 First Nations people and their supporters are uniting under the banner Idle No More against the federal government’s changes to legislation which will affect treaties and traditionally used lands.

At noon on Friday, December 21st, a grassroots led protest is expected to attract thousands of Aboriginal people to a ceremony at Victoria Island, who will then march in solidarity on to Parliament Hill. Idle No More Ottawa will feature voices from many nations and political stripes in a speakers rally that will last until dusk.

The peaceful event page, which organizers simply posted on facebook and twitter, has elicited support for change from around what’s known as Turtle Island and follows several similar protests held across Canada.