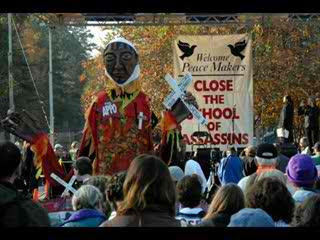 OAKLAND, Calif. – On April 22, 2013, United States District Judge Phyllis J. Hamilton from the Northern District of California has ruled against the Obama Administration’s secrecy around the multi-million dollar, U.S. taxpayer-funded Western Hemisphere Institute for Security Cooperation (SOA/WHINSEC) military training school, and has ordered that access to who trains and teaches at the school be restored. Human rights activists had taken the U.S. government to court over its refusal to release the information, and won.
Read the court ruling here: SOAW.org/judgment
SOA Watch compiled the names, course, rank, country of origin, and dates attended from 1946 to 2004 for every soldier and instructor at the School of the Americas, which was renamed to the Western Hemisphere Institute in 2001. After researchers exposed cases of known human rights abusers attending the WHINSEC (despite claims that the "new" school was committed to human rights), and shared this research with Congressional decision-makers, the Department of Defense (DOD) refused to disclose any future information about students or teachers at the WHINSEC.
READ MORE:
http://www.soaw.org/news/news-alerts/4097-federal-judge-orders-release-of-names-of-soa-whinsec-graduates
at April 22, 2013