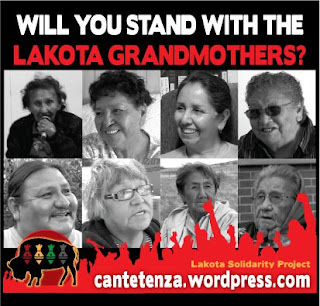 UNITED NATIONS FAILS TO ACCOMMODATE LAKOTA GENOCIDE COMPLAINT
U.N. Sends Security Chief Instead of Diplomat to Meet Lakota Delegation
New York City -  A delegation of Lakota Elders has been refused the opportunity to personally deliver an official Complaint of Genocide against the United States to United Nations Secretary General Ban Ki-Moon,  his staff, or any other high ranking United Nations officials.  Instead, following a march through New York City with over 100 supporters, they were barricaded in a park outside U.N. Headquarters in New York and met by security personnel.
“Its not surprising because we have been going there for thirty years, and they have yet to stop the genocide, contrary to their own mission statement to protect nations large and small,” explained Lakota Grandmother Charmaine White Face.  The Preamble of the United Nations states:

“…reaffirm faith in fundamental human rights, in the dignity and worth of the human person, in the equal rights of men and women and of nations large and small, and to establish conditions under which justice and respect for the obligations arising from treaties and other sources of international law can be maintained…”
The Lakota Truth Tour Delegation had secured up-front promises by international organizations and others to be received within the United Nations to deliver the complaint and discuss the ongoing conditions of life that are destroying Lakota Elders and people.  But at the last moment, these promises evaporated.  A backdoor offer to meet with U.N. officials on Thursday, was also diverted to the bureaucratic process of the Permanent Forum on Indigenous Issues preventing direct nation to nation representation by Lakota Oyate (Nation) delegates with the United Nations.
Entitled Official Lakota Oyate Complaint of Genocide Based on the 1948 Convention on the Prevention and Punishment of the Crime of Genocide,  the eight page notice begins:

This letter serves notice as complaint, that the crime of genocide is being committed, in an ongoing manner, against the matriarchal Tetuwan Lakota Oyate of the Oceti Sakowin, an Indigenous First Nation people whose ancestral lands comprise a large area of the Northern Great Plains of Turtle Island, the continent known as North America.
The complaint further names the United States Government, U.S. state governments, and others as the perpetrators of historic and ongoing genocide against the Lakoya Oyate based on articles set forth in the 1948 Convention on Genocide.   The full complaint is being prepared for delivery following final review by international attorneys.
The Lakota Truth Tour is in Day 11 of an educational tour across North America that is building broad awareness and support to end the genocide against the Lakota. In addition to talks by Lakota delegates, the tour also debuts the incendiary documentary “Red Cry” that meticulously outlines the genocide of the Lakota people as described through their stories and lives.  The  Lakota Delegation is working to  meet with U.S. officials next week in Washington DC.
“We are going to challenge all of the world nations to look at the unhealthy way the United Nations responds to First Nations people, “ said Lakota delegate and warrior leader Canupa Gluha Mani. “Any other ethnic group out there can take their case and plead it to the U.N. because they coat the truth in sophisticated language. We are looking for other nations that will support the Indigenous people who still speak their language within their own country.”
For more information visit LakotaGrandmothers.org.
Posted by Censored News, publisher Brenda Norrell at April 12, 2013