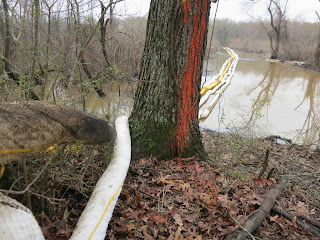 Mayflower, AR, April 4 – We had hoped to interview some affected residents, but they were too sick to talk to us. They live on a street immediately adjacent to the ones which were evacuated. Some homes which were not evacuated are actually closer to the spill than those which were – they’re a couple minutes by car but they’re only separated by a small grove of trees. The residents had not been contacted by Exxon or warned in any way about the dangers of tar sands. Both canceled the interview because they were feeling too sick to meet. Vomiting, headaches, dizziness, burning throats and coughing: the exact same symptoms felt by Kalamazoo residents after the Enbridge tar sands spill there in 2010. MORE: http://www.tarsandsblockade.org/exxonspill-dispatches-2/
at April 05, 2013

This is appalling but not surprising. They should have been evacuated and I hope they are figuring it out now. As heinous a crime as this always is, the worst behavior always seems to be saved for after the spills...the coverups and the denial and the lack of effort to be upfront. Those people need to get out of there. This is not oil, this is Tar Sands, a fuming noxious broth of caustic chemicals.