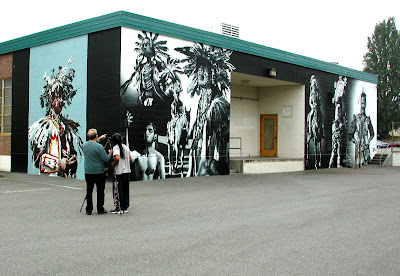 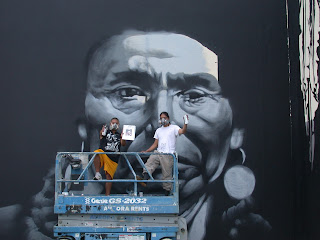 Seattle — After school officials at the Indian Heritage Middle College passed a capital levy last month to tear down their aging building and replace it with two new schools, the five large scale 25-foot high murals painted by 31-year-old native of Apache and Haida descent, Andrew Goseyun Morrison, may be lost forever.
Artist Morrison, the son of San Carlos Apache tribal elder, Elesta Goseyun Morrison, began painting the murals which can be seen for blocks in North Seattle at the Wilson-Pacific school campus.  The paintings of Chief Joseph, Chief Seattle, an acquaintance and friends and most notably, an Apache Mountain Spirit Dancer have become part of the Native American community in this region.
The school officials have been asked by members of the community including Sarah Sense-Wilson, Chairwoman of the Urban Native Education Alliance and coordinator for the Clear Sky Youth Council and Dr. Kelvin Frank, Executive Director of the United Indians of All Tribes Foundation, to renovate the aging building at Wilson-Pacific rather than replace it.  Their main intent is to save the murals. 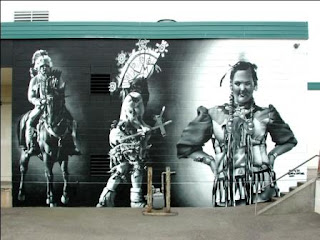 There are a few places I enjoy driving by in Seattle because of this AMAZING artwork.
It will be a shame if these places go away.
This news makes me sad.