US Border Patrol responsible for beatings, dragging migrants through desert 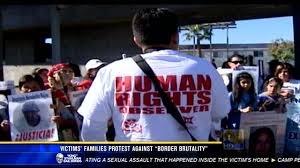 By No More Deaths and Border Communities Coalition
Censored News
www.bsnorrell.blogspot.com
LOS ANGELES -- On March 30, 2011, José Gutierrez Guzmán, a 41 year-old immigrant from Los Angeles, was hospitalized after being beaten unconscious by border agents inside the San Luis Port of Entry in Arizona. This past Saturday marked the two year anniversary of the case, and the expiration of the federal statute of limitations for civil litigation against the responsible agents. Yet U.S. Customs and Border Protection and the Department of Justice still have not released basic information on what happened to José or the identity of the agents responsible.
Gutierrez had lived in Los Angeles, CA since the age of 9. In March 2011 he received a letter from Homeland Security, presented himself to immigration authorities, and was subsequently deported to Tijuana, Mexico, leaving behind his U.S. citizen wife and two U.S. citizen children, aged 5 months and 2 years (the eldest of whom suffers from autism and the youngest of whom was, at the time, in the hospital). Prior to being deported, Gutierrez worked as a film engineer while his fiancée at the time, Shena Wilson, trained to be a nurse.
Like thousands of other recently deported migrants, Gutierrez was determined to return to his family. On March 30th Gutierrez attempted to cross through the Port of Entry at San Luis, Arizona. It was here that agents first tased Gutierrez and then inflicted the injuries that would permanently change his life. Initially, agents told Shena, “Your husband fell backwards and hit his head on a rock.” Agents later acknowledged tasing Gutierrez but claimed his injuries were due to his subsequent fall. Later, medical investigation discovered blunt force trauma not only to his head but to multiple areas of his body. After the beating José Gutierrez remained in a coma for several weeks, during which time U.S. immigration authorities repeatedly tried to deport him to Mexico. Due to the severity of his injuries, he was eventually allowed to remain in the United States. But he suffers permanent brain damage and ongoing seizures, requiring constant care and making it impossible for him to work (see photos of Gutierrez's injuries here).
Said Gutierrez’s wife Shena, “It has been 2 years, and never have we received any answers. We don’t even have a real report of what happened. It was just rumors between consulate members, Border Patrol, lawyers. Then their version changes – they’ve changed it 2 or 3 times. We don’t know who the agents are, how many there were. They won’t release any surveillance videos.”
A report released March 28th by the University of Arizona's Center for Latin American Studies found that of 1,113 deported migrants interviewed between 2010 and 2012 more than 10% suffered some form of physical abuse at the hands of U.S. agents, ranging from being punched, kicked or shoved. One individual was tied up behind a Border Patrol vehicle and dragged through the desert. A 2011 report released by Tucson-based No More Deaths (an immigrant advocacy group) found similar levels of abuse. In addition, there have been 20 known incidents of lethal use of force by CBP agents since 2010, including Anastacio Hernadez-Rojas, whose May 2010 beating death near the San Ysidro, CA Port of Entry was captured on cell-phone video by multiple witnesses.  Criminal charges have still not been filed in Hernandez-Rojas’ case.
Stated Hannah Hafter of No More Deaths: “Here in the southwest borderlands, over and over again we confront a ‘green shield of silence’ when the families of those that have been harmed or even killed seek answers. The Border Patrol and the Department of Justice refuse to release information to the families or otherwise pursue accountability for what are clear and blatant cases of abuse.” Hafter added, “When Washington politicians talk about ‘border security,’ these kinds of incidents are almost always overlooked. Real security includes oversight and accountability for Homeland Security personnel. Nobody should be allowed to operate above the rule of law.”
The Border Network for Human Rights, along with the ACLU of New Mexico and the Southern Border Communities Coalition, has recommended a DHS Border Oversight Task Force—composed of diverse appointed stakeholders, from northern and southern border communities and experts on border issues— to bring accountability to border enforcement programs, policies and strategies. The Task Force would oversee the implementation of federal policies and programs on the borders, and review the activities of federal agencies at the borders and in the immediate interior. Also, the Task Force would provide a mechanism to hold federal border enforcement agencies accountable and provide recommendations regarding border operations, complaint procedures, conditions in Border Patrol facilities and vehicles, DHS training programs, and federal border security and immigration policy.
Meanwhile, as congress debates immigration reform, José Gutierrez and his family, along with many others, worry that they will never see justice.

“Since 2004, over 130 agents of the U.S. Customs and Border Protection (CBP) have been arrested, charged, or otherwise prosecuted on corruption charges. Allegations and convictions include alien and drug smuggling, money laundering, and conspiracy,” Rep. Michael McCaul (R-Texas), chairman of the Subcommittee on Oversight, Investigations, and Management, said in his opening statement at the hearing.
Besides Customs and Boarder Protection personnel, Immigration and Customs Enforcement (ICE) and Transportation Security Administration (TSA) employees have also abused their positions, McCaul observed.
McCaul said an ICE agent in February pleaded guilty to illegally providing documents to individuals with ties to drug trafficking organizations. ICE agents have been convicted of accepting thousands of dollars in bribes from immigrants seeking U.S. documentation, he said.
http://www.theepochtimes.com/n2/united-states/congressional-hearing-examines-ethics-violations-at-dhs-242766.html
at April 04, 2013