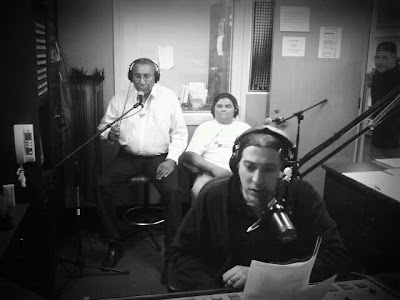 Reposted with permission from Raven Redbone
'Make No Bones About It'
http://ravenredbone.wordpress.com/2013/04/21/chief-arvol-lookinghorse-message-for-may-2013/
Photo by Mark Johns Colson

Mitakuye Oyasin!
My Grandmother shared with me a powerful time when the people came together for prayers during the Dust Bowl in the 1930's. She accepted a C'anupa to bring out the White Buffalo Calf Pipe Bundle to end the drought and bring healing to Mother Earth. Even the non-native farmers heard of this prayer time and offered a cow to feed for the ceremony. The prayer was answered!
Recently I accepted tobacco from a Grandmother – Anpao Wic'ah'pi Was'te Winyan of the Ihanktowan Oyate. She had a dream of bringing People together at the bundle to pray for a healing of the biggest cancer that is spreading upon Mother Earth; caused from the Tar Sand efforts with XL pipeline that is threatening to come through our territory and our Sacred Sites.
Our Nation who is known as the Pte Oyate (The Buffalo People) will be praying with Sacred Bundle on May 18, 2013. Please bring food for feast and tobacco offerings.
I am asking 'All Nations, All Faiths, One Prayer' to help us during this time of this gathering by praying with us on this day where ever you are upon Mother Earth.
We need to stop the desecration that is hurting Mother Earth and the communities. These recent spills of oil are affecting the blood of Mother Earth; Mni wic'oni (water of life).
Chief Bernard Ominiayak of the Lubicon Lake First Nation of Canada is also asking for prayers and to let the World know of his People¹s stand against the Development that is happening against his People. They sit on 70% of oil; those that are after this oil are threatening their lives. His concern at this moment is of non-members, without their consent, signing away their rights and negotiating with Corporations that will forever affect their way of life – to live off the land – handing them a death sentence. At this moment there are too many of their people dying from cancer. When they hunt, they are finding maggot-infested moose. When they fish they are finding two headed fish. The people are dying from trying to survive in a traditional way in their territory. The UN has submitted a statement in support of Lubicon Lake Nation's stand to live in Sovereignty and live in their tradition.
We have many concerns at this time. Along with the First Nations whose territory is within the Tar Sands desecration; with their lives being threatened and also the high death rates of cancer, along with the sickness of the land and animals.
Many other Nations are committed to praying with us on the day of our ceremony. For those that cannot attend, Chief Wic'ah'pi To Wambdi is helping with his sister¹s dream representing the Ihanktowan Oyate, by asking those that cannot attend to send him tobacco ties and flags so he can carry them for the People to the Bundle.
I have also been contacted by People who will have another gathering outside the UN at Isaiah's Wall in NYC, they are committing to support and pray with us on May 17th at noon.
In a Sacred Hoop of Life, where there is no ending and no
beginning!
Hec'el oinipikte (that we shall live)
Chief Arvol Looking Horse, 19th Generation Keeper of the
Sacred White Buffalo Pipe
For More Information:
http://www.lubiconlakenation.ca
Address of Chief Wic'ah'ipi To Wambdi, 30702 Eggers Road,
Wagner, South Dakota 5738
Posted by Censored News, publisher Brenda Norrell at May 01, 2013

How to send tobacco over there ?

Sentiments received. Urgency reaffirmed. Thank you for the report.
Any links or other information on the NYC gathering on May 17? Will plan to be there - that's facing the UN on First Avenue at East 43rd Street. Until then, peace and good power to you and yours.

Non-native friends, supporters and allies will be holding an event in solidarity with you on May 18. Still being planned. We respect, and will help protect, Mother Earth and all her children. Thank you for your leadership.

Thank You for your voice and power to bring us native and everyone with a good heart to give our blessing our mother. Hold us together and use our good souls with good to bring back the love to our mother. We have not forsaken you mother. We are still here your children "The eagle is still the eagle and the bear is still the bear, so the native is still the guardian of our mother. Pray good thoughts to your eagle fathers and our prayers will be delivered. Ele kwak

Have you seen what he said at the UN?